I am about to through out of my window the Orange pi R1 because I have tried several images from the Original SITE and they DO NOT WORK regarding the ENABLE of the wireless Adapter..!!!

There is an image on OpenWrt site
http://downloads.openwrt.org/releases/18.06.2/targets/sunxi/cortexa7/openwrt-18.06.2-sunxi-cortexa7-sun8i-h2-plus-orangepi-r1-ext4-sdcard.img.gz

I don't know if it will solve your problem or not, but you can try!

Which openwrt image did you download?
Which steps did you follow to write the image on the card?
Which problem came up after it booted?

Also, are you aware that for security purposes, OpenWrt doesn't enable WiFi by default?

You have to manually enable it on your first config.

they DO NOT WORK regarding the ENABLE of the wireless Adapter..!!!

Rather than have your router with no password (or one that everyone knows) up and open on a predictable SSID, it is simply disabled and can be easily enabled through SSH or, if on a release build, through the web interface, "LuCI".

Maybe I didn't make myself clear enough. First of all I am very furious of buying this product before (orange pi r1) because as it name suggested is a ROUTER BOARD.!!!!!!!! But I found out as many people did ( and please do post if you find otherwise) that there is NO SUPPORT on the RTL8189ETV Wifi chipset neither from openwrt, nor ARMBIAN operating Systems...!!!!!!!!!!!!!!!! And as a consumer - customer when I buy a product I expect from the manufacture page support to work WHEN they have images on openwrt..!!! Am I correct or not???
I do not have the time to became a programmer or play with programming right now. I have uploaded every new image I could find for openwrt on this garbage board that I am done with it.The wireless DO NOT WORK. Everytting else is working ok, so the board is OK , I think....

You may mask-out the MAC address.

it name suggested is a ROUTER BOARD.

Well, I don't know why Wireless is not supported, and I think the manufacturer should have (if they haven't) put such note if they market the device saying it works with OpenWrt.

Having said that, a "router board" doesn't necessarily have WiFi capabilities. Modem, router, switch and wireless AP are for different functions that could be all in one device or in separate devices. So if they say it's a router board they would be right, though it's appropriate for them to put a note that WiFi isn't supported, especially that they sell the devices.

Thank you very much... They have made an image with OPENWRT which DO not support the on board RTL8189ETV chipset..!!! How stupid can they be???? But in the original site of them they support openwrt without saying anything at all. Besides what is the point of developing an openwrt image without WIFI support???? How stupid is this??? As for ARMBIAN it has problems there too both images..!!

The OpenWrt image might not support the Wifi for various reasons. Lack of functional open drivers can be one reason.

At the product page they don't mention anything about OpenWrt, (supported are Android 4.4, Lubuntu, Debian, Armbian Image)
The OpenWrt image posted in their site seems to be way behind as they posted it in Jan 2019 and it still is using the old version 18.06.1

To conclude, I believe you are ranting at the wrong place. Here would be more appropriate.

http://linux-sunxi.org/Wifi based on this, the wifi driver is actually available probably nobody integrated it yet?

The situation around Realtek wireless drivers, particularly USB wireless drivers, is an utter mess. Realtek pushes out new, slightly changed, wireless chipsets 2-3 times a year, each with their own vendor driver[0], which is subsequently forgotten about immediately, in favour of the next one - but doesn't follow up with upstreaming them at all[1]. For a while these drivers were accepted into staging, but after six drivers ended up there[2], rotting away without ever getting closer to being mainlined, staging is no longer accepting[3] new drivers of this particular kind.

This means the drivers remain unsupported upstream[4], with random github users adopting the vendor drivers and keeping them on life support for their own needs - which means you end up having to choose between different kind of bugs, depending on the 'best' source of the day. None of these drivers support AP mode at all[5].

Aside from doing this properly, by mainlining (mainline, not staging), there is no way forward for these drivers. Given the pain and invasive nature of the required efforts to (potentially) getting them working under OpenWrt[6], trying to support these for OpenWrt wouldn't be a reasonable effort.

--
[0] each coming with their own ~2.6.16-era ieee80211-softmac derived wireless stack, each exporting the same -conflicting- symbols to the rest of the kernel
[1] the situation for their PCIe devices is slightly better, not good, but better
[2] only a single PCI based Realtek WLAN driver (rtl8187se, aka rtl8185b) ever made it out of staging (absorbed into the existing rtl8185 support of the rtl8180 driver)
[3] https://lkml.kernel.org/r/20190515163945.GA5719@kroah.com I recommend to read the whole thread
[4] unless someone does the heavy lifting to porting support for the devices to rtl8xxxu
[5] that's a lie, but each needs its own patched hostapd 0.4.8 (the current version would be v2.9) derived fork, with a custom driver backend and a wext like userspace interface; none of this supported or supportable in OpenWrt
[6] yes, it would be easier if you only care about a single one of them and are fine with changes that would break the others - aside from that, you'd have to actively put your head into the sand and ignore the security implications of running an abandoned 14 year old hostapd codebase…

Maybe just using a USB-dongle for wifi then, especially the onboard Wifi is not FCC-certified anyways. RPI boards use usb-dongle for their wifi-APs.

This board looks excellent for normal use cases, except that wifi is not good for serious use, sigh.

Most USB dongles, unfortunately, have poor to no driver support for AP modes.

This is not quite correct, at least not for those shipping with onboard WLAN. On these devices a Broadcom (fullmac) WLAN chip is connected via SDIO. While the SDIO bus has an impact on performance, the drivers and firmware are 'better' than those of most ("all") USB devices, meaning they should do AP mode just fine (at limited speeds).

Armbian seems to do a reasonable job staying on top of the Realtek driver issue. Possibly there should be some collaboration going on there between OpenWrt and build what they have over to linux-musl.

WiFi works on OpenWRT from the official orange site, but this is an old version (Linux OpenWrt 4.14.87)

Probably you need to build the kernel module/driver, but I do not know how to do it.
https://linux-sunxi.org/Wifi 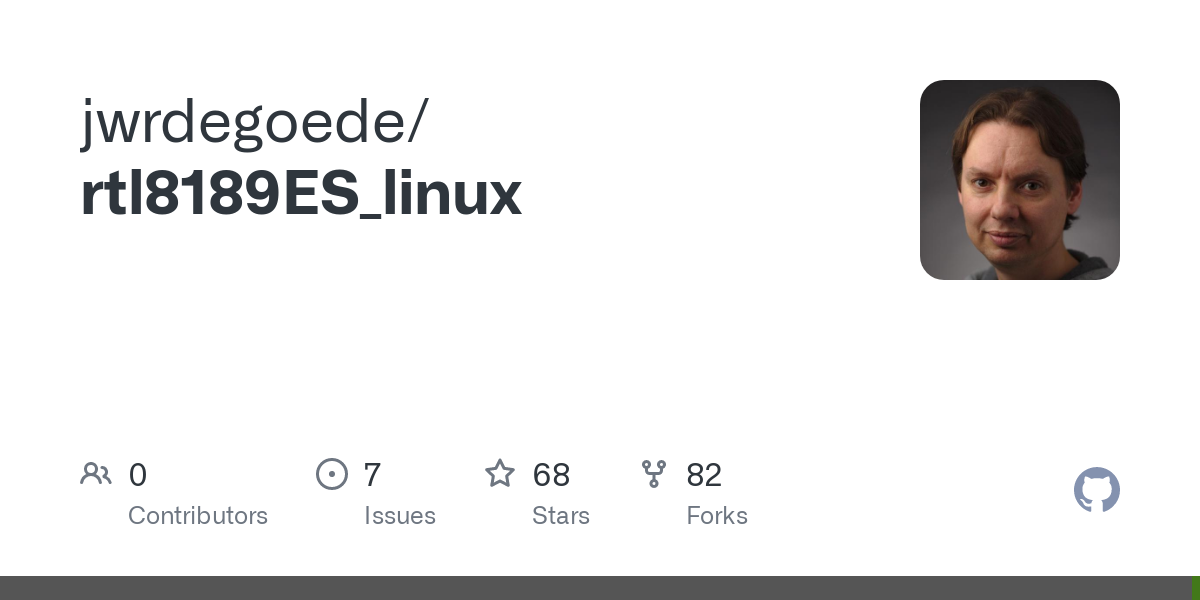 Contribute to jwrdegoede/rtl8189ES_linux development by creating an account on GitHub.