I am still very new to OpenWrt, and I apologize if this is a simple issue. Hopefully someone can point in me in the right direction

Thanks for the suggestion, frollic. I tried those commands earlier, but just to be extra sure I tried them again right now. After executing the commands and waiting a few minutes, I am not able to ping, ssh, or access LUCI at 192.168.1.2 (no route to host). I am guessing at this point I will need to factory reset unless you have further advice.

Earlier, I also tried changing the LAN IP address in LUCI (network > interfaces). This produced the same result which led to factory resetting. I will be offline in a few minutes but I will be able to do more troubleshooting tomorrow.

Try with a static IP on your client. Frollic's instructions should just work. Also, as of 22.03 VLAN 100 is not needed anymore? Did you sysupgrade from an older 21.02 or master build? Or flash 22.03 from the OEM firmware directly?

I think you have the same issue as me with a similar managed switch, you have to change the switch config to DHCP (or your .2 address): Managed switch doesn’t show up in the network - #2 by bill888

Try with a static IP on your client.

Unfortunately I could only ssh on VLAN 100.
I flashed 22.03.0 from OEM firmware using the initramfs-kernel.bin and then ssh'd afterwards to do the sysupgrade. I grabbed both files from here.

Should I try factory resetting and sysupgrade using the file from here? Those files appear to be more recent. I am still not able to access my switch after changing the IP to 192.168.1.2 (whether using VLAN 100 or not).

I think you have the same issue as me with a similar managed switch,

Unfortunately that is a different issue. My switch has been flashed with OpenWrt and is no longer using the Netgear web interface.

That's weird... Both should be okay. The one you tried is from September 3rd, won't be much of a difference between both. You can try the official images from the second link though. Who knows...

Good news everyone. I did a sysupgrade using the snapshot from this link. I no longer need to use VLAN 100 to ssh to the switch, and I'm able to ssh after changing the IP to 192.168.1.2! After setting the gateway to my router's IP and setting the DNS IP I was able to opkg update and install LUCI. Hoping that this snapshot is stable enough to use for a while. I will need to do more testing.

I've tested the 22.03 release image and could not find any issue in regards to the ip change. I assume the vlan 100 caused the confusion.

Well I'm puzzled, since this commit removed the management VLAN and it's part of 22.03 as well:

The default management interface should be easy to find for users doing "blind" …installations without console access. There are already multiple examples in the forum of advanced early adopters having problems locating the management interface after installing OpenWrt. Requiring tagged VLAN configration to access the initial management interface creates unnecessary hassle at best. Errors on the other end are close to impossible to debug without console access, even for advanced users. Less advanced users might have problems with the concept of VLAN tagging. Limiting management access to a single arbitrary port among up to 52 possible LAN ports makes this even more difficult, for no reason at all. Users might have reasons to use a different port for management. And they might even have difficulties using the OpenWrt selected one. The port might be the wrong type for their management link (e.g copper instead of fibre). Or they might depend on PoE power from a device which they can't reconfigure. User expectations will be based on - OpenWrt defaults for other devices - stock firmware default for the device in question - common default behaviour of similar devices All 3 cases point to a static IP address accessible on the native VLAN of any LAN port. A switch does not have any WAN port. All ports are LAN ports. This changes the default network configuration in line with these expectations. Cc: John Crispin <john@phrozen.org> Signed-off-by: Bjørn Mork <bjorn@mork.no> Acked-by: Hauke Mehrtens <hauke@hauke-m.de>

I've tested the 22.03 release image and could not find any issue in regards to the ip change. I assume the vlan 100 caused the confusion.

Your assumption is understandable, but I was unable to ssh in without VLAN 100 on the 22.03.0 image that I acquired from the firmware-selector. I tried ssh/luci on untagged VLAN 1 and was not able to connect.

I have no motivation to make any of this stuff up, but you're welcome to believe that I'm confused. 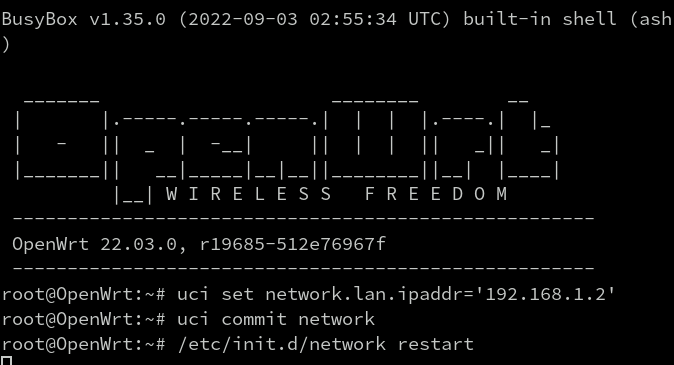 I was unable to ssh in without VLAN 100 on the 22.03.0 image that I acquired from the firmware-selector

BTW this occurred on the default config with no tweaking both after freshly flashing and after doing a factory reset.

Did you try the other Ports 2-8 for managment access without vlan100 normal vlan1 since this worked fine for me?

This was during the late release candidate testing of 22.03, strange thing was that there was no mention in the openwrt network config of the device about this vlan100 for port 1 but it was really needed!

Its maybe something hardcoded by firmware/bootloader @Borromini since the commit you revered to that supposed to fix it was already part of the RC4 june release?

Did you try the other Ports 2-8 for managment access without vlan100 normal vlan1 since this worked fine for me?

Just tried the 22.03.0 release (GS1900-hp24v1) and I can confirm that there is no default vlan100 required for me anymore on port1 for management interface nor packet loss. However the topic starter needed to flash to snapshot?

Strange thing is that @Borromini his revered commit was done at the end of 2021, while I have tested 22.03rc1-5 in summer 2022 which showed this strange vlan100/packetloss issue on port1 and not the other ports without vlan...

However the topic starter needed to flash to snapshot?

This post was flagged by the community and is temporarily hidden.