Both the OpenWrt and LEDE projects are happy to announce their unification under the OpenWrt name.

After long and sometimes slowly moving discussions about the specifics of the re-merge, with multiple similar proposals but little subsequent action, we're happy to announce that both projects are about to execute the final steps of the merger. 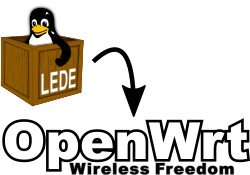 LEDE's fork and subsequent re-merge into OpenWrt will not alter the overall technical direction taken by the unified project. We will continue to work on improving stability and release maintenance while aiming for frequent minor releases to address critical bugs and security issues like we did with LEDE 17.01 and its four point releases until now.

Old pre-15.05 OpenWrt CC releases will not be supported by the merged project anymore, leaving these releases without any future security or bug fixes. The OpenWrt CC 15.05 release series will receive a limited amount of security and bug fixes, but is not yet fully integrated in our release automation, so binary releases are lacking behind for now.

The LEDE 17.01 release will continue to get full security and bug fix support for both source code and binary releases.
We are planning a new major release under the new name in the next few months.

The merged project will use the code base of the former LEDE project. OpenWrt specific patches not present in the LEDE repository but meeting LEDEs code quality requirements got integrated into the new tree. The source code will be hosted at git.openwrt.org with a continuously synchronized mirror hosted at Github. The original OpenWrt codebase has been archived on Github for future reference.

Yet open pull requests to both the old OpenWrt and LEDE repositories will be closed after a 30 day grace period. We encourage people to open new pull requests at the new repository or re-send still unmerged patches.

The remerged OpenWrt project is legally represented by the Software in the Public Interest (SPI) - an US 501(c)(3) non-profit organization which is managing our OpenWrt trademark, handling our donations and helping us with legal problems.

Infrastructure currently available under the lede-project.org domain will be moved to corresponding openwrt.org subdomains and redirects will be put in place where appropriate.

The merger of the OpenWrt and LEDE forums and wikis is not yet fully decided, so all portals will continue to be available under their respective domains until a definite consensus is reached.

Also put a date on all Announcements including year, month, and day.

A very often overlooked detail on the internet these days. In the timeless and eternal
internet it's hard to know what is fresh information or exactly how old information is.

Similar comments already made in this thread...

OpenWRT/LEDE Merger - WHEN? Site Feedback and Other Questions

I do not know about you but i do not care how wiki looks as long as it contains information that i am searching for. I frequently find myself searching through old openwrt wiki and i always find what i want. It has a LOT of information in it.

LEDE's Forum should be kept... Also... Night Mode? For the folks browsing the forums late at night.

I added a "Condensed Dark" theme which you can select in your preferences. Does that suit your needs?

I added a “Condensed Dark” theme which you can select in your preferences. Does that suit your needs?

Yes defently !! I love it

Thank you. (On behalf of my eyes at 4am)

"The LEDE 17.01 release will continue to get full security and bug fix
support for both source code and binary releases.
We are planning a new major release under the new name in the next few
months."

This announcement leaves me with some questions. Initially I was planning to use LEDE to image my router. With this merger and some things still needing to be sorted out, would it be better to wait until the new major release under the new name (?) has been issued; or otherwise where do you download a stable release that will continue to see support after the new major release? Maybe this is obvious to other folks. Sorry for being That Guy. Cheers

The LEDE code base will be replacing the OpenWrt code base, so using the LEDE stable release(s) will be fine.

See the LEDE documentation on getting started...

The Table of Hardware with firmware downloads...

Have the principals involved considered adding a link / (redirect) here to the other (legacy) forum, to preserve content for both? It would alleviate the need for major merging, etc., as content concerning the current point release exists here. ... And missing features, etc. could be added in a controlled manner. Just a thought.

well, there will be a link to the old one, because content transfer is never
perfect, but right now, neither one is 'the legacy forum'

There are far more people using the OpenWRT forum than the LEDE forum, so a
simple vote count of users will declare this one the 'legacy' forum

There are far more people using the OpenWRT forum than the LEDE forum, so a

Not clear there is lots of double voting gong on. That is people registered to both forums vote in both polls (and rightfully so, IMHO). Also the openwrt forum, while probably having more registered users shows much less participation in the poll:

I guess one question is could the moderators of both forums make the voting topic sticky so it becomes obvious to all users and at what point in time to finish the poll.

Also important, what %-difference should we use to declare a clear winner?

I don't think a clear winner will be found and maybe it makes more sense to let both portals running and see which one pans out in the end.

Personally I am not looking forward into having to use the PunBB forum again, will probably stop participating in forums at all if it turns out to be the sole solution.

will probably stop participating in forums at all if it turns out to be the sole solution.

I guess, I will not care too much, I am not participating because I like the forum software anyways so as long as the software is not actively hostile, I guess I will keep answering bufferbloat related questions.