One of the topics discussed during the last Hamburg 2019 meeting was Refresh project identity with following tasks:

I've asked Adriel (awesome graphic designer) if he could help us with this task and he had luckily some time in the past weeks, so he has prepared 4 different logo designs(A-D) in 4 different color variants(1-4).

So I would like to ask you for your vote in the following 4 days, helping me preselect one variant/color out of 16, your favorite so to speak. I'm then going to propose winner of this pool in the official vote as defined in the project rules.

FYI once we've this topic solved, we can hopefully move forward with Wiki style refresh and with T-shirts and stickers which is tightly connected to New People topic as well. 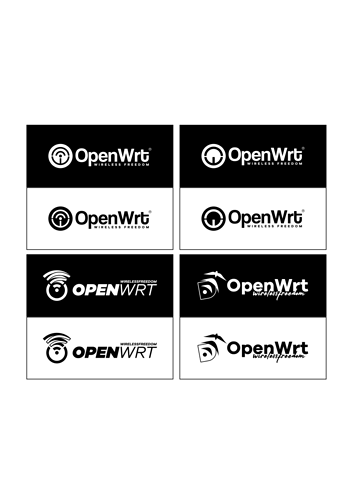 I really like the orange, but it's too close to OpenVPN so I voted elsewhere.

I like the '-1' palette, however wiki should have plain white background (like it used to be in the LEDE days before merger), no need to restyle it in the logo palette colours.

I appreciate the work but for me all of the proposals are just too complicated and in a way, over engineered. Personally, at least for the graphic part, I would prefer something simple.
But maybe I'm just too old

Great logos, I liked almost all of them. Just want to share my impressions:
A seems like an issue with WiFi
B looks like an aim of a gun
C looks cool and even remembered me a palm, also the logo is in a circle which makes the logo great for stickers or favicon.ico
D I liked the idea with flying bird but as for me the logo is most difficult to use in stickers or favicon. Also it's confusing why there is four waves and why there is some D-shaped area.

Uhm, except the "wifi" logos, most of the rest have a peculiarity which, once seen, cannot be unseen.
Here are some other examples of problematic logos along the same lines.

The "fish" logo is cool if you're Pastafarian

agree, but even like this it looks quite good especially because of italic formatting

If you stayed with the name LEDE people would of bought the merch just for the cool name unaware of what it stood for.
Not many people on the street will have any idea what OpenWrt is, They might think its some skin condition.

Do not forget the "favicon", please.

Fish? I can only see a Pterosaur, Rhamphorhynchus WLAN alike silhouette ;- )

For what it is worth, I would stick to colors close to the current ones (so the first color option) and tackle the logo first to maintain some continuity, changing colors would be a separate step later after the new logo has become "normalized".
Given the trademark's spelling I agree with @tmomas that is seems wise to keep the canonical capitalization if only to avoid watering down the trademark.
I opted for C, but I am not fully convinced that the font (especially the lower case t) really is nice, but at least it is pretty unique/rare and so might stand out.
For the logo itself, I think all options are decent, but C's is the clearest IMHO. If one would insist on having a W in the logo itself to complement the O that comes as part of it being circular, it might be possible to gently modify B or C's antenna in a half circle design to closer resemble the letter W by replacing the straight antenna with an inverted V shape but that probably will look ugly...

I Like most C ones, best on blue or aquamarine than on yellow/red

Nice, but ... all emphasis is on the wireless, not on the routing.

Take care, some of the logos look quite the same as the Radio Bremen (www.radiobremen.de) logo.

My views about this:

Colors: 1 and 4 look very nice. I especially like the green in 4. Reminds of 2900 series routers. And Green really goes well with the project. Plus, LuCI used a greenish interface.
2 and 3 look out of place to me. Too harsh.

A: Modern looking, simple. I like it. And the B/W look good.
B: Looks a but like a rifle scope. But does not associate with wireless. And another member pointed out this looks like another logo and may lead to confusion.
C: More complete version of B. But I think I saw it somewhere else.
D: A bit old fashioned, and does not really associate with the project.

They are all too complicated.

Logos should be kept it simple.

My vote atm goes to "None of them".