This is continuation of Refresh project identity - new OpenWrt project logo topic, based on the received feedback. 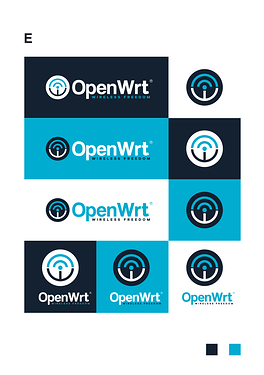 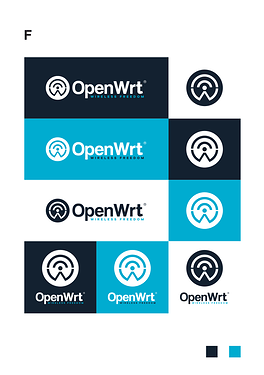 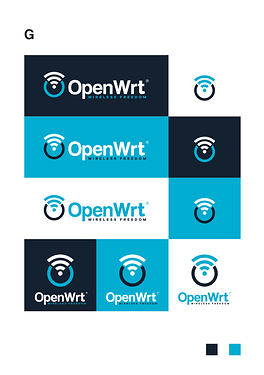 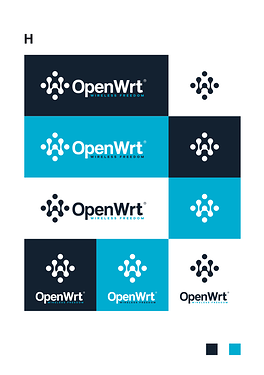 Logo variants in black&white and inverse 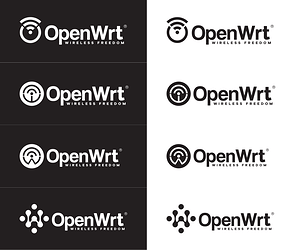 This is for your overview only, how it's going to look in such cases, not for voting

So I would like to ask you for your vote in the following 3 days, helping me pre-select one variant out of 4, your favorite so to speak. I'm then going to propose winner of this pool in the official vote as defined in the project rules.

Too bad the other colour combinations have gone out the window. I liked the greenish tints.

I've posted my vote. You should vote first, then click the triangle to see my reasoning.

PS If you want to do the twisty-triangle things, use [details=Summary] ... your text here... [/details] It's called a "disclosure triangle" in the GUI biz...

Is the voting closed already?
I find no way to vote... (instead I see the results)

I find no way to vote... (instead I see the results)

Yep, I had to open the voting again, perhaps some admin/moderator pressed Close instead of Vote?

Sorry I haven't followed the previous post, but I have a question: which color palette did you use (if at all)? Is it (the color palette) compatible to material design or some of the more modern themes like rosy? I just finished upgrading my configuration and hardwre to 19.07 last weekend and I realize that some of the customization I made to learn more about CSS should be published or pushed upstream. So If these are going to be future brand colors it would be nice to know which colors to use for a consistent look.

So If these are going to be future brand colors it would be nice to know which colors to use for a consistent look.

The next steps are probably following:

I hope, that this could be done in about 6-8 weeks.

@ynezz may we know names/codes of selected colors for printouts (CMYK)?

I am taking the liberty of posting Nishant Sharma's post (to openwrt-devel) here on the forum so that it can be included in the conversation...

All of them are nice and I have voted for the one I liked. I have a
thought here.

As far as I see and use, OpenWrt doesn't stand just for wireless
freedom, though that's the most popular use case. It is being used as a
base for various functions related but not limited to meshing, routing,
network security, IoT and anything or everything that one can imagine or
implement with additional packages. It gives us such a "freedom" and
helps us protect our "privacy".

The logo "H" represents the versatility, but misses the wireless.

Well, even though I was advocate deriving the G from the first round, I liked H, and I voted for both.

Not only is H more creative and out of the box, but also it can carry different meanings (wired, wireless, mish, open) and you don't actually need to squint to see the letter W. It's also unique and it stands out.

G is equally elegant with more traditional approach, representing the wirless and openness.

Certainly OpenWrt is a lot more than wireless, but I think promoting H should probably mean that the slogan "wireless freedom" needs to be revised.

Didn't like any of the proposed logos nor the colours. Perhaps if others think the same can have another round of different logos.

I like the reasoning here. OpenWRT really is useful for much more than wireless. Would there be interest in changing the tagline to something like "Networking Freedom?"

Reminds me of Nokias "Connecting People"

@ynezz -- with all the flak you've been receiving, thank you for doing this and coming up with the new set of options!

They are all great. Thank You!

I personally and at work use OpenWrt for providing Network Security, VPN Services, Dynamic Routing with OSPF, SD-WAN etc and also as a Home Cloud running on a docker container inside my router.

It is a very powerful system giving freedom to our imagination. It's true that one can build solutions using any GNU/Linux distribution, but the way OpenWrt does the heavy lifting of various network functions, it simplifies our lives to build solution on the top of it.

I had always looked at OpenWrt as a full-fledged GNU/Linux distribution with infinite possibilities supporting the widest kind of devices. If this view suits to the community, we might consider to project that with our logo, story and messaging.

I like them all, but some more than others. I think H would be better without the 4 dots, because as it is it has that kind of optical illusion thing going on, where the dots sort of flicker in and out of your attention... It's too busy. Put a circle around the W thing though and it might work better. I like the W thing.

I voted G because it's clean. I really wanted to vote for F, but again I think it's just a little too busy with fine lines, the little gap between the W and the arch is too small, so it almost looks like a printing failure or something at small resolution...

Ideally I think a second round of design trying to utilize ideas from these but get something slightly less busy and slightly more networking and less emphasis on wifi would be ideal.

But honestly they're all pretty dang good.

(thinking about it, what if you put sort of a switch with multiple ports below the O in the G option ?)

Also I like "Network Freedom" instead of "Wireless Freedom"

I like the Logo G variant. Would like to see "Network Freedom" as the subtext. Colors are ok. It's visually simple and immediately recognizable.

Thank you all for the votes and feedback! Lets see what the team members choose as official one

may we know names/codes of selected colors for printouts (CMYK)?

@pepe2k I would like to get CMYK and PANTONE colors into the logo manual.

in changing the tagline to something like "Networking Freedom?"

It was all about new logo and official color scheme, so this change was out of scope. Lets keep this in mind and revisit it next time, in 5-10 years, during another logo/colors refresh.

I like the Logo G variant.
I liked the greenish tints.

I voted for H, but G is nice as well. For me is important, that majority liked the idea of the identity refresh.