Help me figure out why I have gaming latency

hello to all, in order to focus mainly on my latency problem, I appeal to your experience and any idea will be welcome. my permanent latency is both simple and complicated. I have a 100% copper vdsl2 type A line. My download and upload speeds are 65/25 and 8 ms of Ping according to speed test. my ISP has checked the physical line from end to end and according to them it is perfect. my hardware is a Swiss ISP router (swisscom) and behind I have a belkin RT3200 router with a Linksys E8450 firmware version of OpenWrt snapshot, ARMV8 architecture. All my network cables are Cat7. I have not found any solution that allows me to reduce, relieve, remove this latency. I mainly play online games and my online experience is worst, unplayable because this latency has a lag of 900 ms during a Ping in load according to the fastcom test. the waveform and dslreports tests seem perfect but in reality and on all online games I never play in real time but always in the past .. whether my router manages 1 device or 50 there is no difference .. play in Nat 1, 2.3 no improvement. I tested different script, qosify, cake, with and without DSCP class, prioritize by port by IP, do nothing either. in short, whatever I optimize has no positive impact on ms connections, not an ounce of improvement. according to my feelings I clearly receive delay from the outside .. as if I needed 20 ms to go and 900 ms to return. several MTR tests, wireshark captures, etc. are scattered all over this forum, I will try to repatriate them here.
Chères @dlakelan @moeller0 @CharlesJC @Lynx @OldNavyGuy 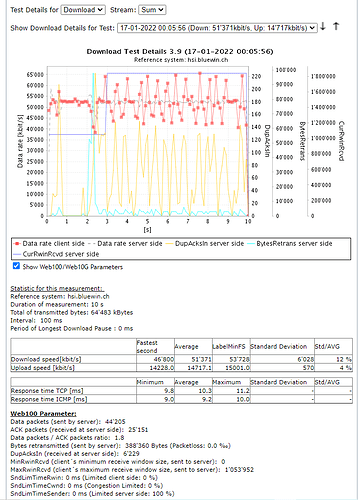 If you set CAKE fixed to 10 Mbit/s both ways does this ensure you have no latency spike? How high can you set it before you start to see issues?

I've been helping him try to figure this out for a while, and as far as I understand it, the answer is no. Even throttling to 10Mbps with cake he doesn't have acceptable interactive gaming.

I had him run MTR for 25 packets every 5 minutes for half a day. Here's the latency variation at the 2nd hop: 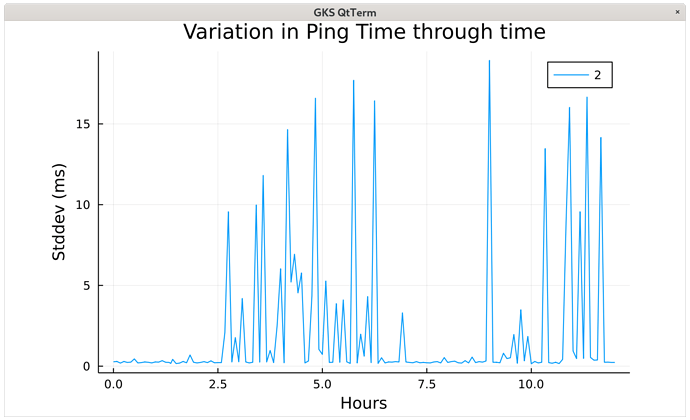 @segal_72 did you have cake running when you were doing those MTR runs?

the weird thing is it doesn't seem like tests of packet latency (like ping times, or iperf3 runs) are strongly correlated with his game play experience. It has the feeling of latency induced somewhere in the middle of the path between him and his gaming servers, where there's nothing he can do to eliminate it.

That being said, if the 2nd hop sometimes has 10-15ms of stddev in ping times, well, that could be the device just down-prioritizing pings, or it could be congestion in the DSL cabinet...

Yes I have always cake running

15 ms corresponds to how many lost packets?

For 60Hz game 15ms is about 1 packet (1/60 = .01667). Remember in the graph, this is a measure of variation so you're not seeing latency, you're seeing jitter (how much the latency changes from one measurement to another).

Is it possible that I feel a clear difference between 8ms jitter and 0.8ms jitter?

theoretically which DSCP class is recommended for games? what are all the protocols that require this class … certainly udp port, some tcp not all? dns? if you had to prioritize the protocol for the game, what would be the privileged protocols that we could test in this sense?

DSCP class is recommended for games?

DSCP class will only be relevant to help when you have family sharing the connection and you need cake to determine that your game packets should be delivered while the family has to wait or drop packets on their streams or downloads or uploads.

It can not be guaranteed to do anything for you over the internet portion of your journey. In fact it is a good idea to "wash" the outbound DSCP

Is it possible that I feel a clear difference between 8ms jitter and 0.8ms jitter?

Definitely it's possible. 8ms of jitter means some of your packets will be delayed 16ms which will be like packet drops. Jitter is a measure of variation, and the variation will not just be a fixed amount.

Op, you're not providing much to go on.

Can you provide a network diagram, with network addressing? Is the isp router actually a bridged modem? Do you have double NAT or CGNAT impacting your connection?

If you hotspot your pc to a mobile device does the latency exist over the mobile connection?

What other services are running on your network? What type of internet connection is this? Is the medium shared (eg; in a cable modem setup)? What's your bufferbloat score?

Note: QOS is helpful where there's network contention - if you're the only user that's not going to help.

So assuming that your problem is not caused by your own on-premise equipment let's check a few things.
I have a number of questions that you maybe want/can answer:
A. Output of tc -s qdisc, an

B. Output of cat /etc/config/sqm

C. Maker and model of your router:
Belkin RT3200 router with a Linksys E8450 firmware version of OpenWrt snapshot, ARMV8
just for reference.

And now the more relevant parts:

Let's take it from there...

Question: The figure you attached to the top post is interesting, how did you get it? Is that from cnlab.ch?

This has been the case for a while now... Despite numerous complaints from DSLR members, there is no indication from the moderators, or the site owner, that this will be resolved. [DSLR Test Servers] Waveform is probably the better alternative to recommend...

Ran a cursory test a few days ago and no improvement.

It reported my upload at 6 Mbps, when all other tests (Waveform, Ookla Desktop, Fast) are consistently in the high 40's.

It was a good resource in its day...sadly, no longer.

The site itself has been on autopilot for a long time.

Is it? With my configuration, and switching to the http version (so not using the default https version) I still get results as I expect them. So what exactly is badly broken? I do agree though that that test is not maintained well (and the number of measurement hosts has dwindled over the years), but it does offer interesting data that e.g. waveform's test or netflix's fast.com tests do not.

See the link I included above.

A tour through the Feedback and Site Help forums on DSLR has a ton of issues on the speed tests.

I personally won't recommend it to anyone.

You say you have a slow vsl line and the 8ms ping reported in the cobnectio through isp rputer seems quite good for such a line.

I have a rt3200 and latenxy does not increase through it, and is even better with sqm in default config.

But you experience 900 ms latency in gaming, too bad.
And only gaming...
It seems that your isp is penalizing gaming activity and protocols in some way.

If you have the oportunity i will try to reduce variables.

Connect the gaming pc directly to isp router, even in bridge mode and PPoE.
Test speed and ping and then gaming performance.
If there continues to be such gaming latency, the problem is not in your side.

Take explanations from your ISP and if there is no solution seek another one if you can.

We are assuming that the pc for gaming is capable enough and it can mivevthe game with easy.

As I stated above the maintenance is sub-optimal and the number of servers is relatively low, but correctly configured it still works for me. Yes, that is anecdotal and no proof of general usefulness of that test for others, but it does offer a data point that the test is not completely useless.
To make a point pro dslreports: their test returns the time resolved latency measurements, the retransmit percentages from a few of the servers (top 2-3) as well as the AS number of the requesting host, information lacking in all the other tests.
But, sure if the test fails these are not that useful.

Here an example without SQM:
https://www.dslreports.com/speedtest/70184974

(note I have a repetitive spike issue in the upload direction, but that is not dslreports related)

I suggested in the Cake w/Adaptive Bandwidth thread running a TCP trace to the endpoint at different times (including high latency times) using either MTR/WinMTR or PingPlotter to see what the route looks like.

You would be able to see if the problem was inside or outside the ISP's network.

Unfortunately, it's not anecdotal.

Spend some time on those two forums...

It aligns with my experiences as well.

It's simply not reliable.

Well yes, all depends in the networking experience of each one. I am not a hardware engineer.

For me the first thing you need to do in such cases is determine if it may be a problem with your config and equipment or in the isp side and have a way to demonstrate it in an irrefutable way, because the helpdesk is going to put the ball in your roof.
Best way is not having any equipment in your side and the default isp config and recommendations.
If they do not provide a solution the the isp is not good enough.
You don't have to do their work.

But sometimes if you live in remote places you have no alternative, which is probably the case.

It sounds like isp using some kind of restrictions to gaming, probably using satellite or other kind of interconnection which produces the latency for sustained traffic.
Or just an intended gaming penalization or misconfiguration.

Here many ISP providers have penalized bittorrent protocols for long time, when you make tests all is quick and good, but not for sustained torrent interchanging.

yes and it is also a partner application of my ISP which after testing generates an id number to send to my ISP in the event of a network problem.

Unfortunately, it's not anecdotal.

You misunderstood my point, my positive results with dslreports still working as expected are anecdotal and no proof of general usefulness for others.

Spend some time on those two forums...

It aligns with my experiences as well.

It's simply not reliable.

Yes and no, IMHO it offers enough diagnostic data to at least figure out whether the results are interpretable or not. You are obviously free to choose and recommend your own preferred speedtests, but I will leave this sub-thread be, as that is not really that helpful for the OP.