Just wasted 35mins signing up for surfshark and applying for immediate refund... 'only app support for wireguard'... ( no linux either )

(as a bonus their online chat does not work, provide access to humans... for a brand new customer... this is a deal breaker)

(update: responsive to emails although after two they have still not acknowledged my refund request... ok third email and a link to this thread and finally it is done)

seems to be a falsehood at this stage

StrongVPN has wireguard with easy to follow setup instructions

I use my own VPN on a VPS providing dual-stack connectivity.
It is hosted by Linode for $5/month with a /56 IPv6 prefix.
Other VPS providers like DigitalOcean should have a similar plan.
When I need better anonymity, it can usually be solved with Tor.

VPN on a VPS

Had a quick look into this recently... but got put off by all the package types / options...

didn't have the patience to wade through complicated webpages trying to find 'simple linux vps' button without 20 more buttons behind it option... ( amazon is off the list too based on terrible customer service )

I'd go for a VPS too, but it doesn't solve the problem of geo location, if you'd need more than one of those.

You can get a VPS for as low as $10 a year, at lowendbox or lowendtalk.
Or two free at Oracle, been using those for my piholes for the last two years.

With restrictions, of course.

If you only need it for surf, and not streaming,
an alternative might be a private DNS and a cheap host running sniproxy.
That's what I have one of my piholes for, to bypass us sites with geo blocking.

I've used ivpn and mullvad wireguard tunnels on OpenWrt and they both seem to work very well.

Azirevpn was one of the first to support wireguard and also contracted wireguard developer Jason A. Donenfeld to write a blind-operator "rootkit-like" to improve security - see https://www.azirevpn.com/docs/security
disclosure - I'm not affiliated in any way with Azirevpn

I'm using Mullvad, and I think it's worth recommending https://mullvad.net/en/
I've used their wireguard and ovpn config files to connect a OpenWrt travel router and both work fine. Wireguard in OpenWrt was kind of fiddly, but that's not Mullvad's fault.

They have a feature-parity GUI Linux client application in both main flavors of Linux, the RPM version also works on OpenSUSE with a little a nudge. They had it audited last year https://mullvad.net/it/blog/2020/6/25/results-available-audit-mullvad-app/
The app shows Wireguard support on Linux too and it seems to work.

I don't see a Socks proxy feature in the app but they have that too and documentation that shows how to use it on their site https://mullvad.net/en/help/socks5-proxy/
I have no idea if it works well or not, never used nor know much about it.

They accept literally everything as a payment, even crypto or physical money in the physical mail if you want more anonimity.
Fixed price of 5 euro monthly, 30 days return guarantee but I never tested that.

I've also used other VPN providers in the past that were decent and let you download config files for the router, but they were OpenVPN/IPSec only. ExpressVPN, and AirVPN.
Both worked fine when inside china too (i.e. bypassing the state firewall) when was there.

For a VPS service I can recommend, I'm using Hertzner VPS (also Openwrt's build bots are), the lowest tier costs like 3.5 euro per month and I have 20 TB of montly upload cap, while download is unmetered. This is good for a VPN because the connection is bouncing in and out of the VM so if both in and out traffic is metered your actual data cap is halved.

The main drawback of a dedicated VPS is that you can't jump around the world a the tip of a hat. Your server VM is in a datacenter somewhere and it does not move.
I'm using it for the exit point of a OpenMTCP router (it aggregates two LTE modems using Multipath TCP), but that's still basically a VPN-like usecase and the load is similar.

The main issue is that Hertzner offers only a couple datacenters in Germany and Helsinki (somewhere north) so if you live in 'straya it's probably not a good idea.

A list of decent VPS is on the github of the OpenMPTCP project, https://github.com/Ysurac/openmptcprouter/wiki/Install-or-update-the-VPS

Another vote for Mullvad here as well, but it's my first VPN ever. Either way, it works and they support WireGuard. Mozilla also started rolling out a VPN solution but they're relying on Mullvad for that AFAIK (a kind of 'reseller').

also need to go on the list of criteria... and it's half the reason for the question... when most providers heavily steer you into 24month contracts... shopping around/experience on multiple providers becomes limited...

tried signing up for linode and oracle yesterday... but my bank got paranoid and was not able to... (issue is on my end but alternate payment methods might have helped)...

Speaking of free VPS, coincidentally, Google Cloud has just started offering the e2-micro (0.25 vCPU burstable to 2.0 vCPU and 1Gb RAM) in their free tier, which is on par with Oracle (although Oracle offers 2 free VMs vs 1 for Google). Google offers a private IP in their free tier tho, whereas Oracle either doesn't at all or only a single private IP, can't recall. Beware of the international egress fees with Google Cloud tho, these can rack up expenses very quickly.

@anon50098793 give a try to privateVPN they offer 6 day trial and wireguard config can be generated. 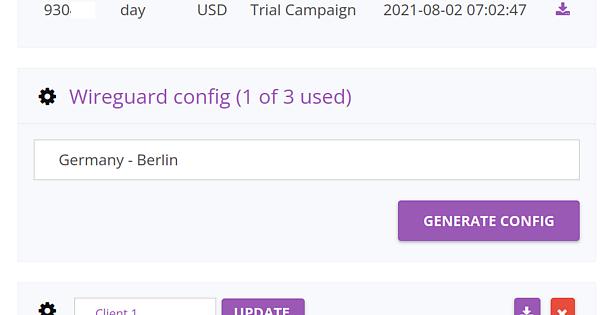 at this stage mullivad's pricing/payment model and reputation seem to be in the lead...

(but need more time/energy to check out the others)

i will likely try to test out a few who offer this capability without credit card first... (this is not a hard requirement... but sort of makes sense from services intended for security)

the criteria for me then shifts to;

the above will obviously vary for others based on location/needs... but a good service should have
good simple quick control panel (or other way
to obtain/change key config info) and support...

speaking of reputation... in the past I entered long term deals with PIA and NORD... (did not test wireguard tho... last I checked NORD was app-only)

i will likely try to test out a few who offer this capability without credit card first...

No need of a credit card for privateVPN just an email.
https://privatevpn.com/prices/?mtrial=7pvpn

I know AWS and Azure have free VPSes too, but I think they're all limited to a year.

their faq states six but cannot test this with trial... no mention of wireguard:

looks like I wont be trusting these guys... "you must pay first to test" and "they dont officially support wireguard"

In my experience, it's been more reliable over the last few years than Oracle, however if you're used to Azure/AWS WebUI it's quite rudimentary. Not sure how APIs compare.

PIA pretty good. would use again... no notification to renew when expiring...

I'd never pay the web-site price for PIA, every now and then there's a deal for their 3-year plan on sites like stacksocial or alike, and it's usually with a steep discount. PIA made some questionable hiring choices a year or two ago and they were very late to the wireguard party, so if you want to encourage providers who started testing wireguard early, keep reading.

Mullvad and ivpn.net (as well as now shut down WireVPN) were some of the early supporters of the wireguard in vpn-policy-routing development and have been providing me with free accounts when pretty much nobody else supported wireguard, so I've used them both a lot.

In my experience, it's been more reliable over the last few years than Oracle, however if you're used to Azure/AWS WebUI it's quite rudimentary. Not sure how APIs compare.

Tbh, I've had one "random" reboot during the two years I've been with Oracle, and one or two occasions when it haven't been responding to the public IP assigned.

Didn't try Google or the others, but the Oracle VPS management UI is a real PITA.