Two days ago my thermostat and 8 of my Kasa smart plugs suddenly got dropped off the 2.4GHz wifi radio. Since then I'm trying to figure out what's going on. I'm running Davidc502 r12833 build for two years now. Fortunately I have some "baseline" figures in this post from two years ago when I wa sbattling with firmware versions: Davidc502- wrt1200ac wrt1900acx wrt3200acm wrt32x builds - #4772 by tocsa

However I was happy with the r12833 for two years. More than a month ago I upped my rented apartment with some smart plugs, 11 of them to be precise. With those I approach 25 devices on the 2.4 GHz radio. According to the documentation the WRT3200 ACM can handle 50 devices. My 2.4 GHz tally:
1 Thermostat
1 Roomba
4 Secu Camera
1 Smart smoke alarm / CO2 sensor
1 Google Home
1 Google ChromeCast
1 Epson XP440
1 LG TV
11 smart plugs (Kasa)

On 5GHz I have 3 laptops, 2 phones, and a few things.
Now watch these graphs, and pay attention to the wlan1, which is the 2.4 GHz, and more specifically the noise levels and signal-to-noise ratio: 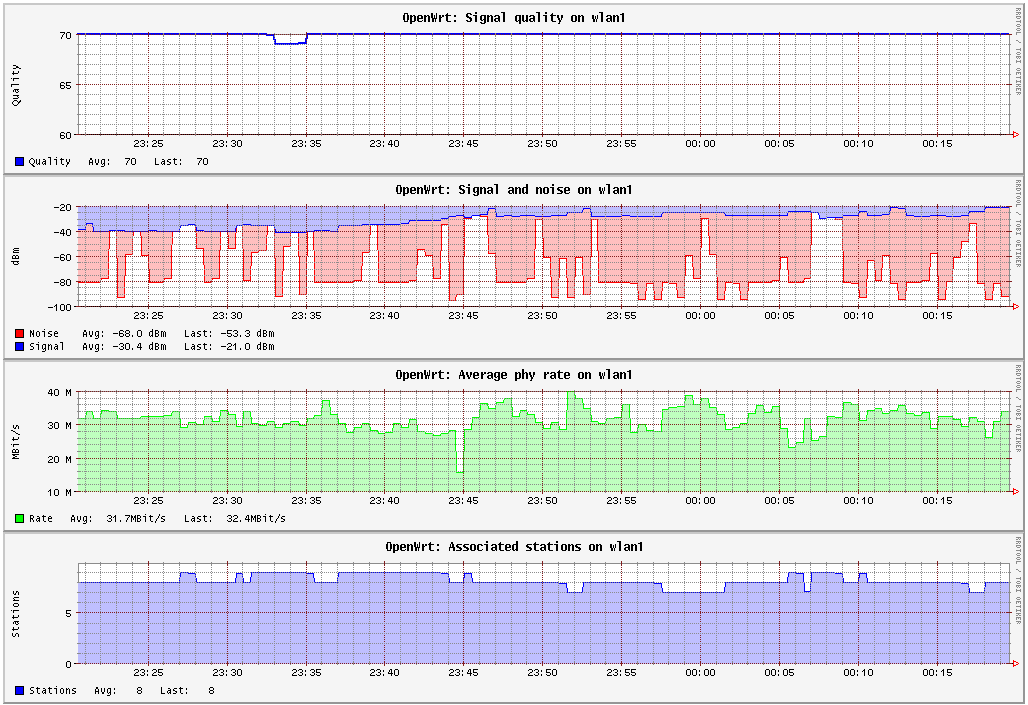 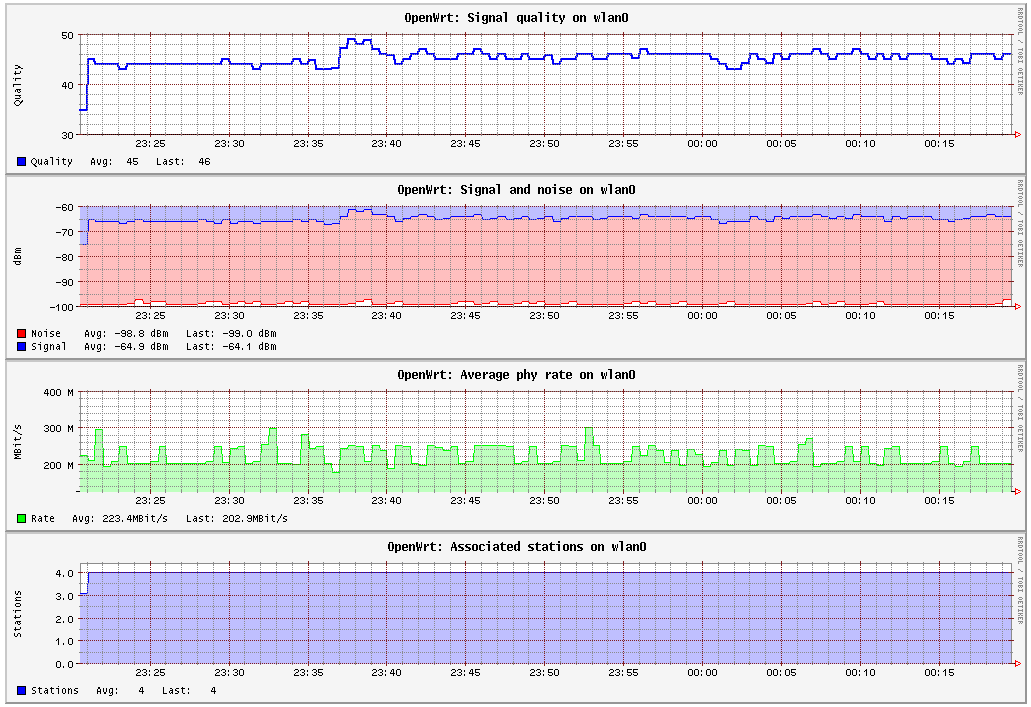 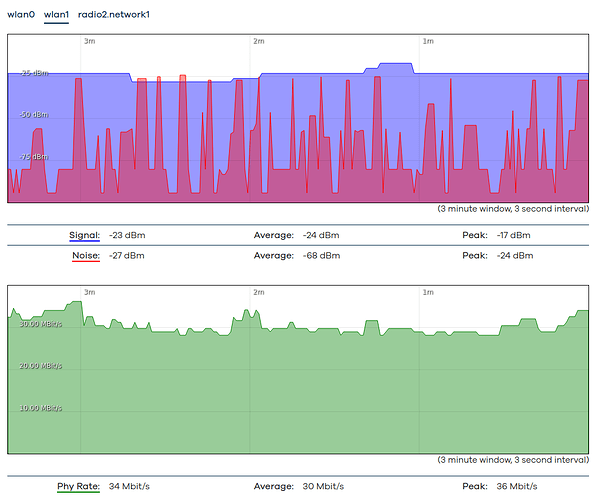 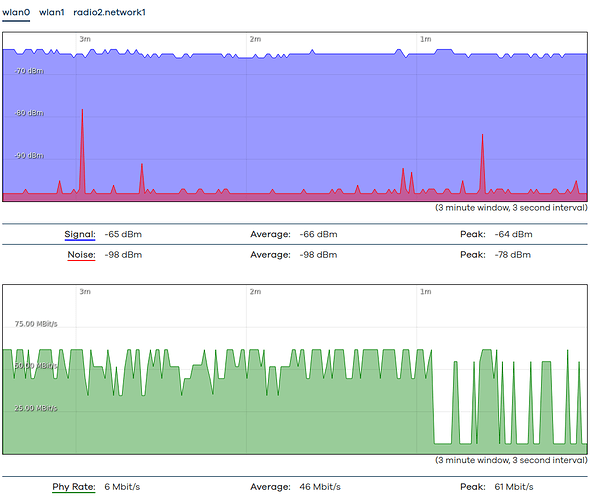 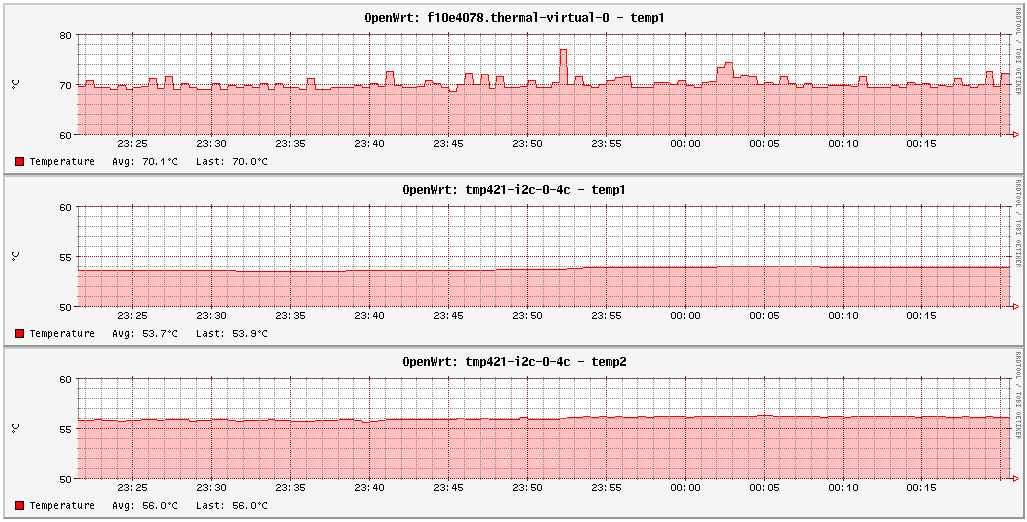 As you can see the 2.4GHz noise and SNR levels are atrocious. Today I went through a half an hour long protocol to take down all 22+ 2.4GHz smart devices and the noise didn't disappear. I suspect something else is polluting, how could I triangulate that or find the source?

Additional info: I'm renting my apartment and there are 11 apartments in my 20-40 yard vicinity. Whatever is generating the noise is not a microwave, because it's always on, it's not intermittent, which would make a triangulation actually easier. But I don't have the knowledge to do that.

The frequencies used for wifi are 'free for all', shared by a number of non-wifi uses as well, including proprietary wireless surveillance cameras, bluetooth and more.

Oh yea, I totally understand that. I mentioned microwave ovens (which are one main reason, and potential noise generator) and Bluetooth as well. The thing is that I live in this apartment complex since 2017 and I never experienced such noise (even at my previous places all the way back to 2007) which would yeet my phone while I'm holding it right next (!) to the AP. Whatever generates the noise is nasty and is very abnormal.

I've been at a place in a major city where wifi connections reached 2.5m at most (2.4 and 5 GHz), direct line of sight, no obstructions, everything wireless or otherwise suspectible of interference switched off in the whole house and some distance to the neighbouring houses. It has never been possible to determine the reason, wifi just doesn't work there (for about one and a half decades already and ongoing)...

how could I triangulate that or find the source? Yikes! I hope I can overcome this with high gain antennas at least. Now I'm reading into ARDF

And I'm trying to find these brand high gain RP SMA antennas (to increase SNR), I cannot find them anywhere, but that's also a path:

Ummmm...those look like detachable antennas that were sold for devices in the past that had them...

You won't find any new ones...at least in the United States...they're illegal now (in general).

At some point in time, it became illegal to modify a completed radio system on a consumer-grade device (the antenna is part of the certified radio system). This is indicative of the fact that you rarely find new devices with detachable antennas these days.

You may find some old/used/old-stock - or similar antennas for commercial purposes.

These are what I use with my WRT3200ACM in a neighborhood that has quite crowded Wi-Fi. They work well for my purposes.

In the meantime I tried to fabricate a Faraday cage around my AP to try to unrule that it'd be the noise source itself (which I still haven't discarded totally).

Aluminium foil, and kitchen pots and sieves. In a way that I leave the antennas out. As I was walking with pots and pans towards the router after some commotion required to free those said pots and pens my wife was looking at me in a funny way

Report: since I haven't found brand SMA high gain antennas I could resort to I ordered some super retro TNC ones (Cisco branded) on eBay and TNC 2 SMA converters from Amazon. The amazon converters weren't the ones depicted, so I had to return them and order new ones, but finally I could setup the antennas, and the problem didn't go away.
I spoke with the adjacent building neighbors (buildings are about 2 yards away) but they haven't noticed noise (or rather I should say looked like have no clue what I was talking about). And finally... one day... I was able to speak with the upstairs neighbor, who is obviously closest to me. I mentioned the wifi noise, and then mentioned the two freq ranges (2.4 GHz and 5 GHz) and they also seemed to have absolutely no clue. However I noticed that the male gave a look to the female neighbor.
Next morning I checked the router again ... and ... the noise is gone!!!