I'm running an OpenWrt snapshot on my router in sae-mixed mode, and a MacBook running MacOS Catalina and some iOS devices running iOS 13 are all able to successfully connect. The MacBook reports that it is connecting via WPA3 Personal, but I can't find any info from the iOS devices as to which WPA version they're using. All the devices were updated with the network credentials already in place - I haven't tested trying to connect a fresh Catalina/iOS 13 device.

This is a shot in the dark, but the only change from the default in my wifi interface configuration (apart from setting the ssid, key, and encryption mode) is that I enable PMKSA caching (via the 'auth_cache' uci setting). Considering the error message regarding an invalid PMKID, this might be worth a try?

That's supposed to only be relevant for enterprise type encryption... But worth a try I guess.

I'll confirm that option auth_cache '1' does fix Apple devices connecting.
I wonder why? I still think it sounds like an error in the implementation from Apple?

Does anyone closer to the source have a comment?
Also i think this option disables the cache, not enables it? Looking at hostapd conf it looks like it is enabled by default.

Can confirm option auth_cache '1' worked for me, my iPhone XR running iOS 13.1.3 connected.

it may not be apparent due to the "||", but setting auth_cache=1 will actually ensure that nothing is done here...?!

yes it does nothing so pmksa caching won't be disabled...which makes 802.1x not safe. But WPA3-Personal should be ok.

I am very happy that OpenWRT 19.07 rc has now been released. Thanks a lot!
During my tests, I found, that one part is missing for me. The feature "WPA3 Enterprise" and "WPA3/WPA2 Enterprise" (mixed) should be available:
https://openwrt.org/docs/guide-user/network/wifi/basic
I can't see it on luci. I have the same dropdown menu as shown in Wpa3 support in OpenWrt? Post #58 by Camis.
Is it possible to add these two menu items, please?
By the way: "WPA2-PSK/WPA3-SAE Mixed Mode" seems to work with my WPA2 only mobile phone using the package wpad-wolfssl.

Also, has anyone made a performance comparison between using openssl vs wolfssl?

As mentioned earlier in this thread.

You need to install either wpad-openssl or wpad-wolfssl (which are distinct packages from wpad , wpad-basic , wpad-mini or wpad-full ), as WPA3 requires functionalities of a full ssl/ tls library.

The full package is larger than either wpad-openssl and wpad-wolfssl though. What does it have that the other two packages do not? ie, am I giving anything up by moving from wpad-full to wpad-openssl or wpad-wolfssl?

I think the way it used to work is that the full variant baked in the required SSL functions, and therefore had no external library required, but had the biggest size.

Looking now, it looks as though FULL is the parent variant, and then you select either OPENSSL or WOLFSSL as the child variants. Either of those will enable things like SAE and OWE (many reports of better success on openssl rather than wolfssl).

This is just my guess based on the makefile, which is a little hard to read given how many variants there are.

I think the way it used to work is that the full variant baked in the required SSL functions, and therefore had no external library required, but had the biggest size

SSL has always been a separate library package.

Earlier it was a dependency hell and plain wpad could require either openssl, mdedtls or wolfssl, depending on the compile time options used. That was clarified by declaring the SSL dependency already in the package name. Thus there is now wpad-openssl etc.

Functional wise it is also wpad, wpad-basic (without eap/radius), wpad-mini (without 80211r and w, thus no wpa3, without eap radius).

I suppose i misspoke, and should have said "crypto" rather than "ssl".
From hostap git:

Which is what i was referring to before. So if you don't include an SSL library, it reverts back to its own internal crypto functions (e.g. for hashing) and these all get linked in and make the resulting binary bigger. If you select an SSL library, these libraries provide the necessary crypto functions, and you get a smaller binary.

Looping back to the original question, as suggested, you need an SSL library to get WPA3 functionality. Additionally, the above explanation is why the binary is bigger when no SSL library is included (which may seem counter intuitive at first).

I have reported the WPA3 bug in iOS and iPadOS to Apple, and I think it would be a good idea if other people who have experienced the bug would report it as well. You can report iPhone bugs here, and iPad bugs here.

Got mixed results here using Fritzbox 4040 (ath10k) and wpad-openssl on both stable and snapshot. macOS doesn't want to connect in wpa3 or wpa2/wpa3 mode it says password wrong or some vague message about not being able to connect. Manually adding a connection shows it only seems to support wpa3 enterprise (see image). On iOS/iPadOS connections went ok in mixed mode but I think they fell back on wpa2.

Same results on both 2.4 and 5ghz bands.

Not sure if trying wpad-wolfssl will yield any different results but I can try if anyone here thinks its useful. Any logs or info I can share or other things to test or try are welcomed. I'll also report this to Apple if this is due to them. Running iOS/iPadOS 13.3.1 and Catalina 10.15.3. 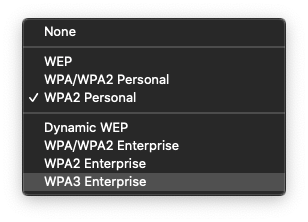 Can the 8Devices Habanero DVK WiFi Router be configured to be a router and an access point using OpenWrt?
string.trim March 26, 2020, 4:49pm #121

I'm missing "WPA3 Enterprise" / "WPA2/3 Enterprise (mixed)" in Wireless configuration on Luci. It is already implemented according to https://openwrt.org/docs/guide-user/network/wifi/basic Steps to reproduce: Install...