I have replaced the bootcode.bin and start.elf on the boot partition as stated in this post on another topic about the 18.06.1 on the RPi 3B+. The console shows, then when I log in to the router configuration page, I see this: 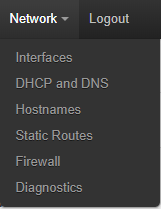 I have run opkg update in the console.
I do have a snapshot version running ok on the RPi 3B+, but then I saw that there was a possibility of running a stable release. Of course, I am not using the micro SD card with the snapshot release, so I can fall back on that if stable is not a really good option.