Hello
Can someone tell me what are the performance of a device that uses Wi-Fi 802.11ac, in this case we have as an example the TV from Lg 2017 the series 49SJ810V.
I ask because i use the following router from Linksys WRT1900ACS v2 OpenWrt/LEDE Kernel Version 4.14.53, with 1Gbps internet connection.
This tv is connected on the 5Ghz wifi side, at a distance of 6 meters that is positioned in the same room with the router.In the speed test it fails to reach a speed of more than 120 mbps!
It can be a problem of incompatibility with the Openwrt software?

do you have any reference? eg. transfer from local nas/networkshare

i suspect the tv-cpu to be the bottleneck.

aside from that, yes, the raw wifi-modulation rate is substantially greater than real-world transfer speeds.

do you have any reference? eg. transfer from local nas/networkshare

i suspect the tv-cpu to be the bottleneck.

aside from that, yes, the raw wifi-modulation rate is substantially greater than real-world transfer speeds.

I have nothing connected to this TV,i only use the applications installed by LG defoult without making any further changes, i just want to put the movies and the series on Netflix...
I suspect the openwrt/LEDE wifi driver, because I have disconnections while watching movies on Netflix in Dolby Vision or HDR format.

What @fuller said, just because you're connected with a high phy rate (~866Mb/s), doesn't mean the CPU of the device is capable of or designed to saturate that link. Your LG TV is 4K/HDR capable, so I would imagine the engineers designed it with the intention of it needing to process 30-40Mb/s streams. That 120Mb/s you're seeing is more than enough for any current streaming services' 4k/HDR streams.

These errors i received when i tried to run a HDR video on youtube as a test! 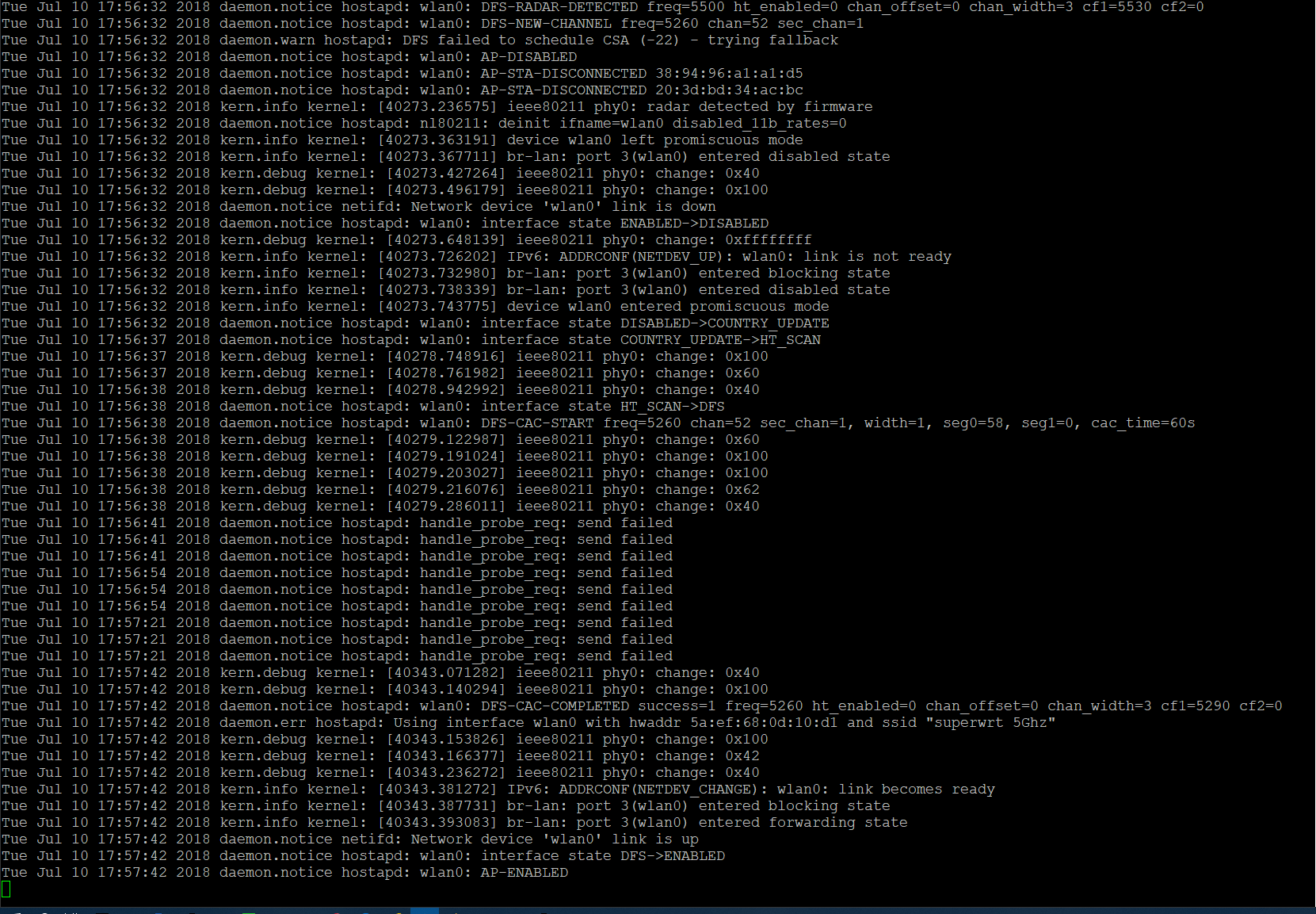 Looks like your 5GHz radio is running on a DFS channel and it's getting deactivated by radar. At this point it scans to find clear channels and comes back up when it finds one.

I'd suggest you change to a non-DFS channel for whatever region you're in.

(I live near an airport and have the same issues with DFS channels).

change to a non-DFS channel for whatever region you'r

I will come back later with more tests and information, thank you for the answers!

It looks like after some changes everything works well, it seems like i left the default settings to the region (country), i only chose the home country and everything seems to work well now!

Cool, your radio will be using the correct channels/frequencies for your local regulations now. Still worth keeping an eye on your logs, though, to see if you're getting DFS scans. Find out what non-DFS channels are available in your country and use one of them if you can.

@WiteWulf thanks for the tips, i'll follow your advice!

For who wants to try the compilations of Daniel Petre,his page is now also in English everything works well!

I would stick to the builds of davidc502, as he is also present in this forum!

It seems the problem persists, now i use openwrt Kernel Version 4.14.54, i followed your recommendations but my TV continues to lose wifi speed, on the 5Ghz side when i watching a 4k movie on Netflix....
I'll leave you a link with the command line logs to check the information by there.
I want to find out where the problem is, to report the issue further...

This ping is normal for Tv and phone on the 5 Ghz side?

On the 2.4Ghz Netflix side runs smoothly with 4k content, i think the problem is from wrt1900acs v2 wifi driver.

Do you know what kind of wireless card is built into your LG-TV?
Make sure you post your issue here: https://github.com/kaloz/mwlwifi/issues
Maybe the dev can help you with your problem, i guess the mwlwifi driver is still a bit messy with certain wifi chips.

wireless card is built into your LG-TV

Unfortunately i don't know what wireless card is built in this series of LG-TV.
Thanks for the advice, i hope to find a solution for this issue.

I found this is the wireless module

Thanks for the advice, i hope to find a solution for this issue.

I guess the mwlwifi driver isn't working well with your wifi card. Do you have another router to test and did you test the performance with the stock firmware?

For example i do have a similar problem with my Intel 8260 card in my Asus notebook... The WRT3200acm@OpenWRT does show a bad throughput but the stock firmware works fine and doesn't have this problem for some reason.
So if you test the stock firmware and it doesn't have this problem you should report it to the dev of mwlwifi!
Basically we can just hope that the dev will fix these problems but for me it seems like that Belkin doesn't put much effort into the open source driver...

I will try later with the stock firmware, at the moment i do not have another router to try if this problem persists..