I am having trouble configuring a wireless link with WDS between 2 of my access points. Everything worked fine with 21.02_rc3 but has stopped working with 21.02_rc4 and 21.02.2.

My layout is below. AP3 is a wireless access point connected via a cable to my main router. AP3 is setup as a plain access point (no DHCP, no firewall, etc...). AP4 used to connect to AP3 with a WDS connection so I could extend my network. After upgrading to 21.02.0 it seems like AP4 can connect to AP3, but no traffic flows from AP3 to AP4 or AP4 to AP3.

I have tried different setting for DHCP forwarding, rebind protection on and off but haven't been able to get it to work. I don't think I am the only one having this issue.

Any help would be greatly appreciated. Thanks 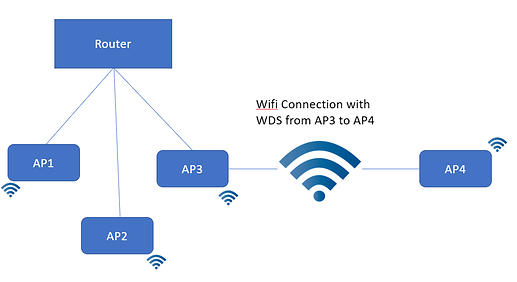 I think it's busted.
https://bugs.openwrt.org/index.php?do=details&task_id=3961&order=dateopened&sort=desc

@chadneufeld You don't mention your hardware which I reckon is essential. E.g. for me, on an mt76 based setup (MT7613 and MT7615 radios) WDS is working fine.

I'm not following the release schedule, but I'm running on post RC4 code.

Hi there, I have a problem with my wds-connection as well since upgrading my two tl-1043nd_v2 to openwrt 21.02.0 stable. The connection between the two routers gets established but I am not able to transfer data through the link. But I found a workaround for the problem for me til the bug gets fixed, maybe it works for you as well:

When the routers are booted and the wds-connection seems to be established, but there isn't any data throughput, it works on my setup to go to the wireless tab in luci on the wds-ap and the wds client and to disable the wireless connection and immediately after that enable it again. This has to be performed on both routers. After that's done, the wds-bridge works fine, at least on my setup. Every change in the settings and every reboot makes this procedure necessary again.

No beautiful or stable fix, but worked for me through the day. Maybe it works on your setup too.

Have a good night

@Borromini - I have a Unifi AC LR AP as the WDS Access Point and an Archer C7 V2 as the WDS Client. Both are Atheros. The WDS link works fine in RC3, but not in RC4 or 21.02.0. I'm wondering if there is a setting or something that may have changed between releases. Would you be willing to share your wifi and dhcp settings?

@c-streif - I just had a quick look and it looks like your TL-1043nd has the same or very similar hardware to my access points. I will give your workaround a try.

Sure will do so when I get home. I had a mixed mt76/ath10K WDS working as well at some point but that was with a sub-par ath10k device (Linksys EA6350 v3) so I can't check if that still works.

@chadneufeld - Give it a try, it's not beautiful, but it worked for me as a quick fix. Today, I "downgraded" via luci-sysupgrade to 21.02rc3. My wds-connection works now without any problems and I don't need to enable and disable the wireless connection after every reboot. I kept my settings at the downgrade as well, so it was an even better fix for me. Nevertheless, I hope the bug gets fixed. Best regards

@chadneufeld I'm not sure why you think the DHCP settings are relevant, since the WDS operates on another layer? It's supposed to be a transparent bridge, from what I know. I have both the WDS master and client set to a fixed IP and they have their gateways and route hardcoded.

Any questions let me know.

I misspoke and meant DNS settings and not DHCP. I read on the forum about disabling Rebind Protection And setting up DNS forwards.

I’ll give your settings a try.

Hi @Borromini. I couldn't get WDS working with 21.02.0 and the network/wireless setting you posted.

I've pulled the changelog between RC3 and stable, because I myself haven't seen any commit come along that might cause this. But I might be wrong of course. And I have no ath10k setups here myself.

Edit: there has been an ath10k-ct bump though, I'd try rolling those back to see if that is interfering. Barring that, might be one of the netifd bumps maybe.

What about this Borromini ? If you are able to pull back particular change, isn't it worth to try as well ?

That's for AX devices, and ath10k is AC.

No worries. We all try to help

The problem is on ath9k as well, not just 10k.
Even though the tplink devices I've seen the problem on are still using swconfig, I strongly suspect it's something to do with the DSA changes as they are the most obvious areas that impact on bridge/vlan/packet movement. ymmv

Thanks everyone. I've decided to try compiling my own firmware to see if I can figure out which commit breaks WDS.

Unfortunately, I'm completely new to using git and compiling openwrt. Here is what I have done so far:

What I was hoping you could help me out with is how I can easily step between different commits between RC3 and RC4. I want to start in the middle between RC3 and RC4 and see if that work. Then keep stepping 1/2 way between points where I know WDS works or doesn't. I found this but am not sure if it's the best approach:

I don't know if this will reference the 21.02 branch or back to the master branch.

There's no need to reset to a specific commit. You can use:

As you can see, git itself already tells you how to revert back to the default state (HEAD) of the branch. It won't be switching branches without you telling it so explicitly.

Edit: @chadneufeld What you could also try (and which would be more fine-grained) is reverting specific commits, build an image, see if that helps. As easy as:

If it turns out that doesn't do anything, you can do a:

After some trial and error I think I have found the offending commit. There are 4 NETIFD commits that happened between RC3 and RC4. The earliest one, fe498dd3f1, causes issues with the stability of the WDS link on Ath9k for me. I wasn't able to rollback just that commit, I had to rollback all 4 commits. GIT threw an error if I tried to rollback fe498dd3f1 without rolling back the other 3 commits.

I think these are the individual fixes within the larger fe498dd3f1 commit. @Borromini, is there a way that I could work with these smaller commits inside of the main commit?

Glad you narrowed it down! It's pretty normal you can't roll back just the one commit, since those build on the previous ones. When you check the commit log, you'll see the commits in the external git tree that are part of the bump:

I'm betting your issue is caused by one of the wireless changes, the repo is here. A final test would be to build directly from the git repo instead of using the git tarball the build environment pulls. At this point, you can just recompiled the single netifd package and upgrade/downgrade it with opkg to your liking. No need to keep reflashing firmwares.

My money would be the f037b082923a netifd commit. I've tried myself to revert just that in the netifd tree but it won't let me, so its time to call in the cavalry. I'd recommend you try IRC and ping @nbd there to see if he can assist, he committed fe498dd3f1 and did a lot of work on refactoring the networking code. Not sure if he replies on/reads the forum, and IRC makes for an easier back and forth (more realtime than a forum).

I'll include a quick write-up for completeness' sake on how to build straight from the git tree. It might expedite things if you already test a few commits.

If you need to test a specific earlier commit, extend 2. with the following commands:

To revert a specific commit:

After that you can run 3. again. What I'd recommend is you build from netifd source before prodding nbd (he'll probably ask you to do so anyway so you can test patches at some point). Commit 013a117 is the commit prior to f037b08 (the WDS change), so if you check out that first commit, build from there, and it works, then build an image from commit db0fa24 (the commit after), you can be pretty sure the WDS one is the one causing trouble.