Is it possible to flash openwrt via tftp without opening the device?

Excellent question, i got one as a backup. would be nice to have bridge mode in it.

Is anyone else experiencing very poor wifi signal on both 2.4 and 5 antennas or it's just me
I'm using the last snapshot.

Most definite +1 from me here.
I was considering buying another device as a backup, and for further development ; the first one is already installed at its final destination. However after some stress-testing I'm having second thoughts.
LTE is fine, seems stable and easily reaches 40+mbit in area where latest android/apple phones have same speeds as well.
2.4g wifi is more or less usable, devices stay connected over multiple-day periods without issues, however max speeds seem a bit worse off. Best I've managed was 25-30mbit from wifi client to internet, while speedtest on the router itself reached 40mbit easily.
Now 5g wifi looks like a dealbreaker right now... DFS channels (52-144) are pretty much unusable, according to logread the hostapd goes from DFS straight to DISABLED without any error message or delay. It should wait 60s according to default config, but apparently DFS-CAC-START breaks off within <1s (it's urban area, I'm not aware of any radar activity anywhere in the vicinity, or even another 5g wifi using those channels from all my scans).
Non-DFS channels are "only" half-way dead - the low-range (channels 36-48) are in conflict with another AP at the location and they are way too underpowered ; I can barely get a client to connect to it, and it breaks off under very light loads. I've had a bit more success in high-range, specifically 80mhz on channel 149. Device stayed connected even under loadtest, but speedtest did not exceed 17-18mbit (right before and after that a direct speedtest reached 38+mbit and a 2.4g client managed 22mbit, so wifi was surely the bottleneck).
I'm quite disappointed the openwrt routers based on WG3526 are no longer available on amazon ; those had some amazing hardware and antennas for everything. I bought one some months ago - openwrt worked straight out of the box, both LTE and Wifi 2.4/5 are great, same price range as mr600 ... overall a lot more stable device. Should have ordered more of them

Anyway my mr600 is now fixed in its place (which will soon be 100s of km from my usual place) and needs to stay as stable as possible, so unless I decide to get another one there won't be much activity from me here I'm afraid.

Thanks for your info but I just want to know is it gonna be fixed or it's gonna be like this forever...

Is there anyway to revert back to the original firmware ? @relghuar
I've used the option "1" and if I'm flashing original stock firmware it says "Bad magic number"
And flashing the same tplink image through sysupgrade doesn't work...

I had to open mine

Yes there is, I've done it at least once myself, although it's not totally straightforward.
You need to unpack the .bin file from tp-link zip package, and then extract kernel and rootfs images from there, ideally as a single image which can then be flashed from openwrt (that you can boot directly from u-boot using command line, see earlier posts).
Command I used to get firmware.bin out was simple, should work just fine for you as that still seems to be latest version, at least from german site - just MAKE SURE you have the V2 hardware of course! (https://www.tp-link.com/de/support/download/archer-mr600/v2/#Firmware):

Now you can simply upload that firmware.bin into the openwrt-booted router (via scp for example) and use mtd command to write it directly to "firmware" partition, something like this:

PS: I'm pretty sure there should be a way to upload and flash that firmware.bin directly from u-boot command line, but I have no way to test it anymore so I won't speculate on the required procedure

Someone with easy access to serial console and an hour or two to kill should be able to find out easily.

You're a life saver, Thank you !

Everybody and their neighbors here seem to have successfully booted their Archer MR600 v2 with OpenWrt, and here I am with LZMA ERROR 1 when I'm trying to do so.

Whatever attempt I try ends up with an LZMA ERROR 1.

Found the right address thanks to this post [Solved] Uboot - Not enough buffer for decompression LZMA ERROR 1 - #29 by numero53
tftp 0x80a00000 openwrt.bin did the trick.

Your method works like a charm, it actually helped me unbrick the device from a saveenv. Now I use it to toy with 2021's firmware squashfs, only to see if there are security issues in there.
This Makefile made my life easier, HTH anyone:

The machine I build on is not the machine with the serial plugged in, hence the scp.
On the remote serial machine, openwrt.bin is a kernel+initrd snapshot.

How's the WiFi for you ? Is it horrible like us ?

Hi! Sorry for stepping in like this :} But from the discussion above I have not understood if we need serial access to the device in order to flash OpenWrt on the MR600, or if it can be done via LAN.

I just signed up to the forums to say the guides here are very helpful, it lead to my first time soldering.

Was going to solder pins but realised the pictures showing the serial pinout were taken from the side with the heat sinks removed. No space on the back for pins unless I cut a large-ish hole so I got creative with the cable installation: 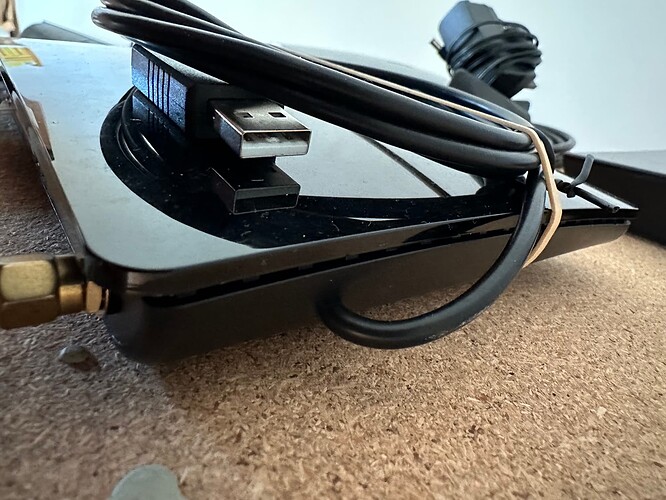 I also wrote a small script to give the signal bars some functionality. I have a non-flashed MR600 to compare and believe the strength is determined by RSSI, however the script can be adapted for any values returned by UQMI signal info. Put the script in a non-temp folder and add it as a scheduled task. I set mine to run every 2 minutes:

UQMI does seem to timeout returning info after a while, it seems the device gets busy with a "failed to connect to service" message, the data connection continues to works fine though.

The grafana dashboard is coming along nicely too when UQMI isn't timing out...

hi there
have a question and want to use ch341 programmer: to get rid off isps firmware and load the oryginal tplinks one would it be something like for unbricking the mr200 v1 ? anyone tried or have some ideas?

would this be worth trying ?

I might take a look at implementing support for MR600v1 soonish.
Opening it to get to the serial port was annoying tbh

it's on the bottom of the board and there is a silver plastic hinge or something clamping together top and bottom part of the case that was annoying to get out. (I bend it with the top part of the case first, so I might not be able to get it back in)

Atleast others will be able to install fw through tftp instead.

current build scripts in the snapshot still generate unbootable squashfs images for MR600 as far as I know (can anyone confirm this, or have it been fixed already?).
You'll have to create your own image, by downloading snapshot ImageBuilder here (see detailed instructions here ), unpacking and modifying it according to my earlier post and executing build command for MR600:
make image PROFILE="tplink_mr600-v2-eu"

can confirm, it is still broken
currently the line to edit is 570

thank you @relghuar for your work!
saved me alot of time

here's a pic of the serial pins, since the other links seem to be down 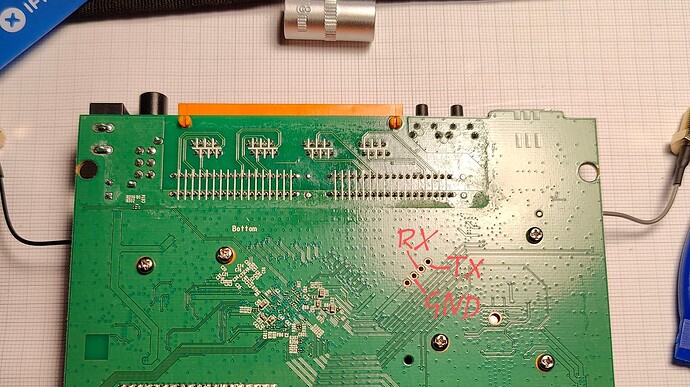