Stripping Firmware - How Much to Remove?

I recently had to recover from a bad flash on a TL-WR841N. Router was stuck in a boot loop.

To recover I used TFTP to install the factory image with the first 512bytes stripped (0x200) - it worked.

It was actually the OpenWRT TFTP recovery page for the Archer C50 where I got the information to strip the first 200 hex blocks in order to get the firmware to take.

Before I found that useful page, I used binwalk to analyse the factory firmware. 0x200 was not mentioned anywhere in the binwalk output.

My question is; in future how I can know how much of the firmware needs to be stripped to recover over TFTP?

That was the first article I used, it didn’t work. It actually says to strip the first 0x20200 blocks.

I was at the stage of ‘I’ll try anything now’ when I tried stripping only the first 0x200 blocks.

How can one know how much needs to be stripped if there is no clue in the router’s serial output and no clue in the binwalk output? Is there another way to find out?

That would be the answer to your question - the Wiki. Otherwise, only the OEM could hazard that guess - as this is OpenWrt.

Regarding Binwalk, you could have used a hex editor, if you knew what you were looking for. 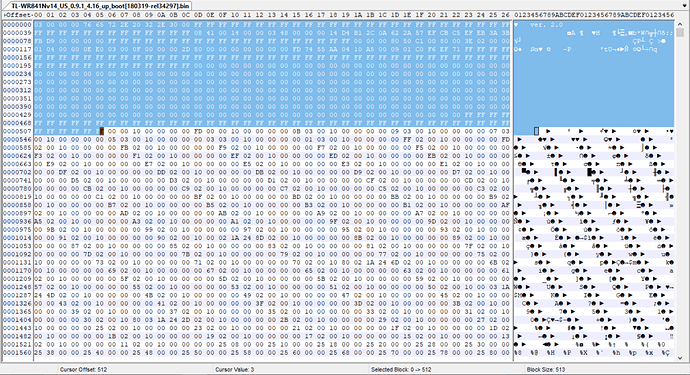 My question is; in future how I can know how much of the firmware needs to be stripped to recover over TFTP?

Perhaps you think this is common with other routers, it isn't. I've never had to strip a firmware on any other device. To answer you directly, the Wiki will tell you.

Thanks for taking the time, to both of you that posted.

Am I clear in understanding that you found an instruction manual that told you 0x200, correct?

My router is WR841N, I found the reference to stripping 200 blocks in the Archer 50 wiki, a totally different router.
After trying stripping other amounts that I had read about, for example the WR841N wiki says to strip the first 20200 blocks, I had nothing to loose, the router was already a paperweight. Anyway, stripping the first 200 worked.

Regarding Binwalk, you could have used a hex editor, if you knew what you were looking for.

I did use a hex editor, I used XVI32. Knowing what to look for in that hex file was the basis of this post, but it looks like there is no answer to that original question.

Recovering this router for me was a matter of me being too stubborn to quit. The value of the router is nowhere near worth the time I put into recovering it. I just have a genuine interest in this kind of thing.

I was messing around trying to get a version of OpenWRT on this as yet unsupported router. Maybe not the place to post this, but I will be infinitely helpful for anyone searching for a solution to this problem, so here it is: If your TL-WR841N v14 is in a boot loop after a botched firmware install, this is how to fix it:

My router is WR841N, I found the reference to stripping 200 blocks in the Archer 50 wiki, a totally different router.

Can you add this to the Wiki?

Thanks Man!
You save my times. After trying more than 12hours to unbrick my router, i already have lost my hope. At last i found your solution and it works like charm. Thank you very much.