After OpenWrt reset to defaults I received a warning: WARNING: REMOTE HOST IDENTIFICATION HAS CHANGED!

I`m trying to backup and restore OpenWrt according to this guideline: https://openwrt.org/docs/guide-user/troubleshooting/backup_restore

When trying to download the backup file by running scp root@openwrt.lan:/tmp/backup-*.tar.gz . I received the following message:

I already updated keys based on the 3 methods proposed in this post, but the error "ssh-ed25519 host key mismatch for openwrt.lan !" remains when trying to download the backup file.

How can I correctly update ssh-ed25519 host key for openwrt.lan?

Usually the client tells you, odd:

Thats the command on Debian-based distros.

It should. It resolves to get the IP.

"Thats the command on Debian-based distros.": I`m running on macOS.

When restoring previous backup.tar.gz file, I can download the backup file without any erros though scp root@openwrt.lan:/tmp/backup-*.tar.gz .

After reset to defaults the problem persists.

So - you'd find the command(s) to remove/reset SSH keys in MacOS.

Execute nslookup on the MacOS, not the router.

These tasks should be completed on the client - not the router.

These tasks should be completed on the client - not the router.

That, it was a bit obvious from the beginning.

it was a bit obvious from the beginning.

You're saying the OP also executed the original scp command improperly on the OpenWrt - instead of on the Mac.

(I missed that at first.)

Thanks a lot @lleachii and @trendy !

I wasn't noticing it also. Just copying and pasting from the guideline: 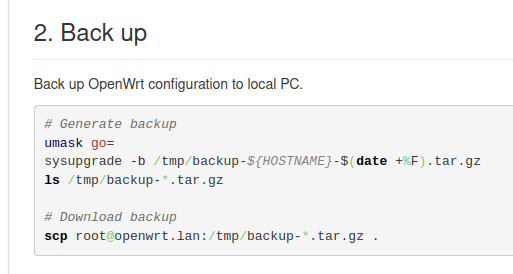 I think it could be worth updating the guideline making it explicit: "#From the client, download backup ": despite obvious, it's not necessarily evident for newbies (like me). It comes from a sequence of tasks from the router side...

@lleachii , after you suggest "So - you'd find the command(s) to remove/reset SSH keys in MacOS." i ran it on Ubuntu and obviously got the same error, hopeless to get it working... thanks u both

I think it could be worth updating the guideline making it explicit: "#From the client, download backup ":

If you want to contribute to OpenWrt by adding useful information to the wiki, you can apply here for a wiki account. New OpenWrt forum user (TL0) Post here, mentioning @wiki-account, stating that you want to get a wiki account. Since new users can not send PMs, someone from the OpenWrt team will contact you and initiate the conversation. All other OpenWrt forum users (Basic, Member, Regular; TL1 and above) Please send your desired username, real name and emailaddress via PM to wiki-account,…