Recommendation for a Wi-Fi 6 AP that also supports 802.3at PoE?

TL;DR: does anyone have recommendations for an OpenWrt-supported AP (just AP; no router needed) that supports Wi-Fi 6 and also supports 802.3at PoE?

When I purchased my house, when it was empty, I wired the 5 main rooms (3 bedrooms, living room, dining room) with Cat 5e, terminating them in the basement, connected to an EnGenius smart switch EGS2108P. My Internet service (Verizon Fios 1GBit) also terminates in the basement, connected to a Linux-based PC which functions as the router. The router connects to the switch.

To provide wireless networking, I have an EnGenius ECB350 wireless AP plugged into the dining room port, sitting on top of a bookshelf. Since there was no power outlet close to the bookshelf, the ECB350 powers itself via PoE (802.3at).

The Linux router, the switch, and the AP all perform VLAN trunking. I currently have 7 VLANs, 5 of which are mapped to SSIDs on the AP.

This setup has worked well for multiple years.

But alas, the ECB350 AP is so old that it doesn't support anything later than 802.11n, and it hasn’t seen a security update for years. It has also started flaking out occasionally, forcing us to reboot it. That doesn’t bother me that much, but it is really starting to irritate the wife. As the saying goes, happy wife, happy life, so It’s time to replace the ECB350 AP with something that doesn’t flake out. And Wi-Fi 6 and actual security updates from this decade would kinda be nice, too. (EnGenius stopped releasing security updates for the ECB350 pretty much as soon as they launched the product, alas.)

(At some point I will probably want to replace the EnGenius smart switch EGS2108P with something else and install OpenWrt on it, but for now, replacing the AP (and making the wife happy) is the priority.)

A search of the Table of Hardware shows two Ubiquiti devices that might meet your needs. There may be others also as I don't believe the Power Supply field is correct for some PoE devices.

Can always get a splitter on the device's end, making it possible to power any AP or router via PoE.

I've considered this, but it raises reliability concerns. TP-Link is the closest thing to a reputable brand I've seen out there, and it's only rated 1A at 12v; embedded routers with wifi typically ask for 2A. The overwhelming majority are the usual no-name nonsense-syllable brands that have no need to stand behind their products and no reputation to risk. I'm thinking of buying two different ones with a high customer rating across a large number of reviews, and if they both work, keep one as a cold spare.

I know someone had gotten the TP-Link Omada EAP615-Wall up and running though I'm not sure how far along it is in terms of official support.

It's not official but stintel has a tree:

If I drop back to just b/g/n and a/n/ac, instead of demanding Wi-Fi 6, the GL.iNet GL-B1300 looks promising. It looks like GL.iNet already bases their software stack on OpenWrt, although it’s not clear to me if it’s vanilla OpenWrt (in which case is should be easy to upgrade it to the latest version) or OpenWrt plus special sauce (in which case I will probably want to blast over their custom version with vanilla OpenWrt).

(My current EnGenius ECB350 works that way: you can power it via either PoE or the supplied power supply.)

Problem is most of the AX devices have Broadcom chipsets, which is a manufacturer not working with the open source community. They use a 10-12 year old Linux kernel with their driver BLOBs, and require NDA for (re)distribution.
Not sure the kernel version applies to their AX devices, does for the ACs though.

Maybe @RaylynnKnight can answer this question (he added the PoE optional statement to the dataentry).

Three EAP235-Walls in use here, on my PoE+ switch:

I've considered this, but it raises reliability concerns. TP-Link is the closest thing to a reputable brand I've seen out there, and it's only rated 1A at 12v; embedded routers with wifi typically ask for 2A.

The reason routers are specced to 2A is because they are supposed to be able to power external USB drives. In usual AP setup, I would be surprised if they pull more than 0.5A.

I run a bunch of Archer C7's APs powered by splitters, and they pull around 6W (overclocked). Also. splitters are specced to 12V2A.

Good point, and thanks. Can you name the splitter brand[s] you use and what you recommend?

I bought Chinese from the Ebay. I believe I paid 7 EUR a piece.
Be advised that vast majority of Chinese splitters are 100Mbit, so make sure you order 1GBit splitters. 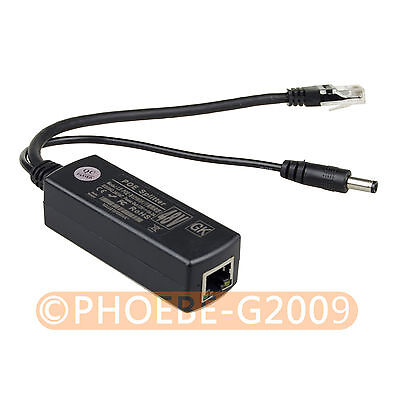 Thanks. Can get instant gratification (2-day delivery) on this one, so thought I'd give it a try. The reviews are mostly positive.

I'd be reluctant to trust cheap no-name gizmos like this on critical infrastructure, but for my application it's worth a shot: I mainly just want the AP to survive power blips, and for that I need POE so it's protected by the PoE switch's UPS. If this splitter dies there actually is a power outlet nearby, so going back to the wall-wart as a failure is an option; and if the splitter somehow fries the AP I also have a cold spare, configured and ready to power up at a moment's notice.

I ordered mine direct from GL.iNet with PoE. It was a separate item which appears to no longer be available. The Model is GL-B1300-POE.

I ordered mine direct from GL.iNet with PoE. It was a separate item which appears to no longer be available. The Model is GL-B1300-POE.

I think I’m going to go with the GL-AP1300LTE. I don’t need the LTE modem feature, but the base non-LTE version (annoyingly) doesn’t come with external Wi-Fi antennas. A reviewer on Amazon asserts that with the external antennas, he doesn’t need multiple units to create a mesh network; a single GL-AP1300LTE covers his entire house. We don’t have a large house (our current EnGenius ECB350 is our sole AP), so I think a single unit should do it, as long as it has the external antennas.

And I have to give props to a company that is using OpenWrt by default, instead of rolling their own proprietary binary blob that they will cease updating 18 seconds after product launch. Amazon reviews seem favorable, too. And the GL-AP1300LTE definitely supports PoE. The only red flag is that apparently it used to ship with an ancient version of OpenWrt that people had difficulty updating, but GL.iNet claims that is no longer the case. I’m sure I can get past that hurdle.

The reason routers are specced to 2A is because they are supposed to be able to power external USB drives. In usual AP setup, I would be surprised if they pull more than 0.5A.

Yep. The one I got (linked above) pulls 4w or a third of an amp when powering a Linksys ea6350v3 802.11ac IPQ4018-based wireless router/switch. Too early to tell about reliability but it works on arrival, is gigabit, doesn't get particularly warm (though being DC-DC and containing only trivial logic there's no reason it should) and plays nicely with a Zyxel GS1900-8HP.

Yes, but you only need one supported device, don't you?

What happened to the Ubiquiti suggestion? I have two Unifi 6 Lites here and am pretty happy with those. Nice and compact design, and relatively inexpesive. Well known (aka old) MT7621 SoC. Lousy old 2.4GHz radio. But the 5GHz WiFI 6 radio is fine, and all I care about. Only using 2.4GHz for IoT stuff.

Only power option is 802.3at No power connector. Or connector at all except for the single ethernet port. But who needs more? If you want to power it separately then use an injector.

That's pretty typical consumption. FWIW, the lan8 port is an RPi4 with a gazillion USB devices. Eh, make that 4. But anyway. It doesn't consume that much on its own.