I'm new to the forum, but have been using openwrt (and sometimes ddwrt) for years on my routers (starting back in 2006 ish on my Linksys WRT54G). A lot has changed since those days, I went back to using OEM firmware on my routers (because lazy) and now I find myself once again installing OpenWRT, this time on my Linksys EA3500.

The install process went well, and I am currently running the latest stable release on the router. The question I have is more about the layout.

I found the rosy theme on github and instantly fell in love with the overall layout. For about 2 hours now, I've been trying to find a way to get it installed on the router. ./scripts/feeds does not exist, a prebuilt ipk for rosy does not exist in the stable packages.

I was able to install an ipk from snapshots, however the layout is definitely not the same. There's a clear lack of something from the files, but from what I can tell, all files referenced in the html are present.

I really don't want to build my own image from source with rosy included in it, just to get a nice theme. Does anyone have any ideas/suggestions?

I would show two images, but i'm a new user and therefore limited to one. So here's what the main page of my router looks like with rosy as the theme: 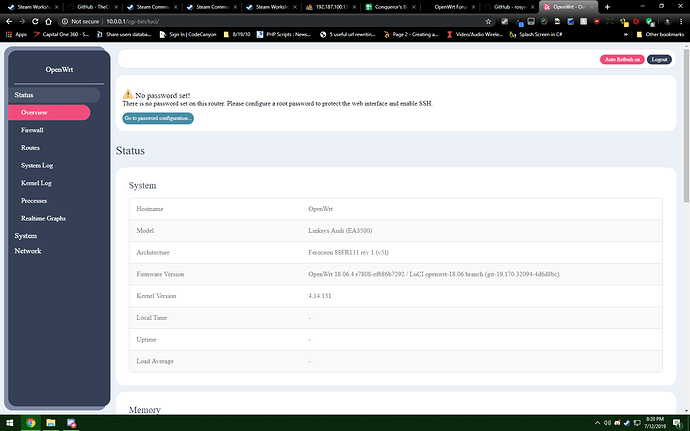 As it's not an "official" part of OpenWrt, you might checkout

[Luci-theme-rosy] Here we go, Rosy them V3 released For Developers

Well, I found references saying it at least was an official package, but that runs me back to the whole ./scripts/feeds does not exist part.

Also, according to the github

NOTE: This is the RosyWrt "luci"-feed based on LuCI. And it was merged upstream now. Try the luci-theme-rosy if your luci version is openwrt-18.06 branch.

If that's the case, is there a way to install it manually without having to make a custom build?

Install a snapshot (off master) and install the packages you need at the same time.

Edit: If you're up for some pain, you might try unpacking it from a snapshot package and installing the files yourself. Personally, it doesn't seem worth it for what might be hours of pain for a prettier UI theme.

I re-read and saw you had already tried installing the package from snapshots.