Hello I need help . I have following problem. I'm creating VLAN ID 10 and when I adding this VLAN to bridge I can see only this router everything what is connected to it I can't see. But from router itself i can ping all network.

If I disable VLAN from switch and connect to router via lan3 or lan2 or lan5 network is running fine. Router is ramips/mt7621

If i using luci it works same manner. 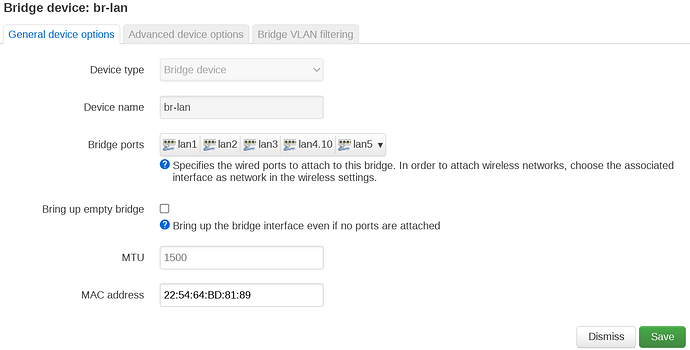 You should use Bridge VLAN filtering instead of VLAN device.

When I'm trying to use Bridge VLAN filtering it doesn't work at all
It works different way I see all network but doesn't see a router itself.

in version OpenWrt 19.07 it was working fine
here you are old config

This configuration doesn't make any sense to me. What is the point of splitting the switchports into vlans, only to bridge them all together?

In order to help RSTP protocol I needed different interfaces

STP doesn't need such help and it looks like poor design.
By default all ports are bridged. If you want them separated you create vlans and assign them to each port. There is no point to bridge them again afterwards.

Thanks. But I need help with current problem.

I have exactly the same problem, and my solution was to downgrade back to 19.07 that works like a dream.

My network topology is quite common. I have an internet gateway router and 2 wifi repeaters. One physical LAN connects the 3 OpenWRT routers in a star configuration with a managed switch in the middle. Over the one physical LAN I create 2 VLANs 1 and 96. VLAN 1 is main internal LAN, VLAN 96 is for guests so that I keep the traffic segregated.

This can be achieved very easily with OpenWRT 19.07. However it does not work at all after the mess they have done in OpenWRT 21.02 with the switch configuration. What happens is that I can associate an interface to the ethernet (eth0.96) device and the 96 vlan works (routers can see each other), but then when I associate the wireless guest network to the guest interface, wireless can't get through. If instead I create a bridge (with eth0.96) device attached, and I associate the wireless network to it, then wifi works (only local to that router), but the router can't ping the other routers on the vlan.

Since I see that the only new nice feature brought with 21.02 is the larger graphs under Statistics, I 'upgraded' back to 19.07 which is a far superior firmware.

Until they fix this properly or they revert back to how VLANs were in 19.07, release 21.02 will be unusable. Too many issues, as this, isn't the only issue, there is more.

that is still unresolved

I have a similar scenario at home: the ATA provided by my ISP requires to be connected on a port with tagged VLAN X. However, VoIP can travel even without the VLAN tag using the default pppoe-wan interface. For this reason, instead of connecting it to the ISP network and after that the router, I can connect it after the router on a tagged port without briding WAN and that LAN port.

In 19.07, I used to create a eth0.X interface with tagged VLAN and then bridge it to the others, so that the box could receive DHCP from the br-lan interface and be reachable from other devices because the br-lan was automatically able to add and remove VLAN tags,as described in this page from the wiki: https://openwrt.org/docs/guide-user/network/vlan/switch_configuration:

WIth 21.02, my approach is to create a lan4.X 802.11q interface and then bridge it to br-lan.
The result almost works: the box receives the IP from the router and can receive and make phone calls, however it is only reachable from the router itself, not by other devices in the LAN as before.
It seems that the bridge is not behaving as the quoted text, but tries to send on the tagged interface untagged packets.

my approach is to create a lan4.X 802.11q interface and then bridge it to br-lan.

Don't do that, instead use VLAN filtering.

Thanks for the quick answer, however setting up like this 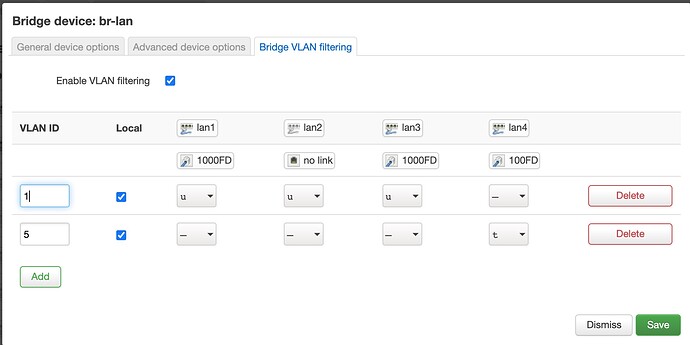 doesn't work: I can't ping the router from my computer (on LAN1) and the phone doesn't work.
May it be related to the MT76 and how the CPU port is treated (there is just one big eth0 interface and also the WAN is DSA managed).

Before you click save & apply, you have to also set your LAN interface's device to br-lan.1.

Ok, by doing that I can access the router.

However, it doesn't solve the "problem". I'll give some more details.
The VoIP device expects tagged traffic on vlan 5 and unfortunately there is no way to access the management page to modify this setting. VoIP credentials of my ISP, however, work even without the tag (I can set up Linphone on my Mac and phone using the normal - untagged - internet). So I wanted to reuse without using the 5-tag on the WAN.
So in 19.07, I created a eth0.5 interface and bridged it to eth0.1 interface, so that the ATA box could receive the DHCP setting from the router and be pingable from other hosts in the LAN. The bridge automatically added and removed vlan tags to and from the ATA box.
I know that I could set up another bridge interface on the other VLAN and set up a new DHCP server, but my goal was to have a single one on the same subnet and just "remove "the vlan tag from the box.
The setting was the following:

I can't get the same result in 21.02. I can use a different dhcp server on br-lan.5 of course to reach the ATA box; another option is to add lan4.5 to br-lan so I can have the box on the same subnet, but not reachable because the bridge itself is not able to correctly remove and add vlan tag (but on the forum i found out that it seems to be a problem of MT76, that the CPU port - eth0 - is not tagged).

To sum up, I don't really need a different VLAN scenario, just a way to remove the tag from the device when added to the bridge.

Thank you for taking time to read!

Do you need the tagged VLAN 1 on the LAN side anyway?
If not, remove the VLAN 1, set lan1~3 to untagged in VLAN 5, and set LAN interface's device to br-lan.5.

I tried that as well and still it doesn't work.
I'm really starting to believe that there is a bug in the MT7530 switch, as if the packet is not sent over the bridge but directly on fabric without adding the tag, unfortunately I don't have other chipsets to try.

Hello, maybe you can help me with the following problem. Wi-Fi Access Point (WDS) doesn't work when VLAN filtering is enabled. I can connect to this AP. but don't have access to the network. When I set WiFi as a client (WDS) it works fine.