Any chance you can create a mailing list where u announce new stable versions? It would help me - and I better others too - a lot.

Yes, I know, but there are so many other e-mails which I don't need and don't want, I just want to be informed about new stable versions.

I doubt that a specific mailing list would be created, as the releases are so rare and sporadic. And there is usually no need to update immediately.

Ok, I'll stick with checking myself on regular basis. Since upgrading with LEDE isn't always unproblematic (I just bricked a WR710N - I think it was due to the low amount of RAM) upgrading shouldn't be done that often anyways and with enough time and care.

As a logged in wiki user, you can subscribe to wiki pages, i.e. you will get notified if this page changes.

Click the envelope button on the right side of the page: 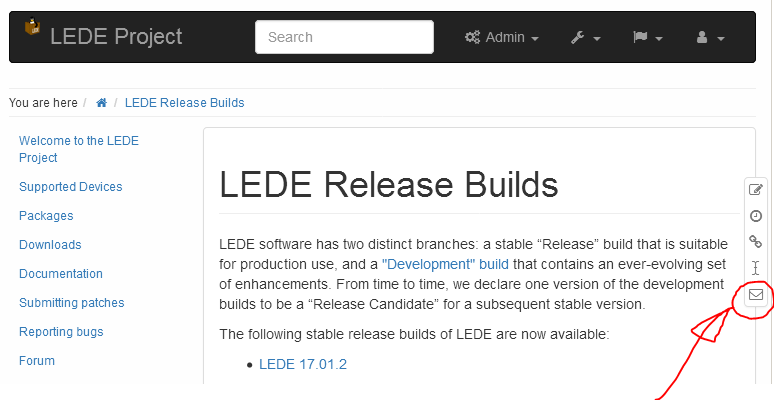 In this case: https://lede-project.org/releases/start
You may get more than one email, but you will get at least one if there is a new release.

Another way to stay up to date with the releases: RSS feeds.

With a RSS reader app on your mobile phone (I'm using the read app), you will get notified about every change in the releases namespace.

Anonymously, no need for subscription to the wiki.

That's weird. I consider Crispin to be very anti-end-user based on his past actions. He's one of those people who makes sure OpenWRT stays the insular decisions-made-in-private smoke-filled-room organization that it is. I would not assume he intended for this to be for end-users of OpenWRT.

I would not assume [John Crispin] intended for [a release mailing list] to be for end-users of OpenWRT.

I doubt any of the core devs or frequent contributors, who are likely doing a git fetch several times a week, need a mailing list to know what the state of the source code is. I further doubt that any of them run a "release" build for anything but testing purposes.

Edit: This does seem to be exactly what you said "would be great".

How are end-users and devs supposed to know about new releases? Installing and Using OpenWrt

Both answers so far require proactive behavior on the part of the user to go out and periodically check for new releases. That's not what I asked for. An announcements mailing list would be great, but the old OpenWRT announcements list was shut down in the last year or two. I don't use twitter myself, but that would be reasonable. However, the OpenWRT official twitter account doesn't appear to list any announcements, and is also full or non-announcement kind of self-promotion that would be ina…