I believe I'm seeing a real problem here With documentation specifically with the Netgear Nighthawk R6700v2 router details. The Details seem to be for a different model: D-Link DIR-509
|Brand|Brand of the device|D-Link|
|Model|Exact Model|DIR-509|

This is even more problematic because several places offsite note that Netgear switched from Broadcom chip in version one to a 880 Mhz MediaTek chip in Version 2. Since then they've come out with Version 3 with a Broadcom chip once again. I'm wondering if the database has been deliberately "hacked", because this is adding "insult to injury" for a buyer of R6700v2. A cruel joke. I believe users can only brick their router uploading OpenWRT firmware, it is not actually supported. Please can something be done about the documentation at least?
For reference: https://openwrt.org/toh/hwdata/netgear/netgear_r6700_2.0

Where is the problem? V2 have mt7621(It was tested), V1 and V3 Broadcom. It is impossible to install wrong factory image via stock web gui. 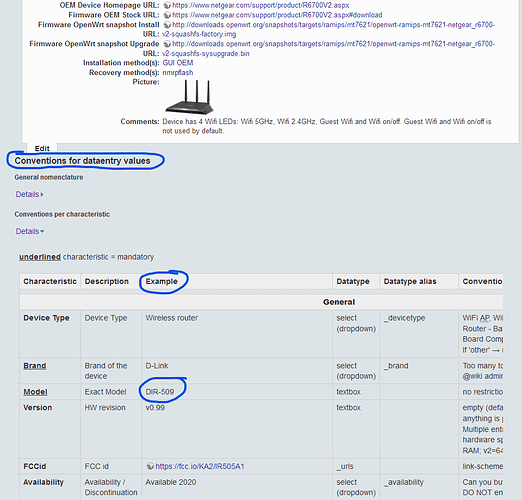 Is this related to why the snapshots have not been working?

I flashed my R6700v2 and it was successful, but the image itself fails and my router failsafe boot back to factory Netgear image.

Totally unrelated since DIR-509 is a dummy device that does not exist.

"unrelated???" because the DIR-509 never really existed? DIR-509 does exist as a D-link model. It's stats are mistakenly listed on OpenWRT under Netgear Nighthawk R6700v2 entry! The database seems to have been updated. Perhaps the new image will work? There's a long history of frustration on the web:
Along with a bunch of other 1 star reviews on Amazon.com detailing the problem: https://www.amazon.com/gp/customer-reviews/R1RJIMMHY77BA7 , there's similar problems on https://www.myopenrouter.com/forum/r6700v2 the https://www.gargoyle-router.com/phpbb/viewtopic.php?t=11799 (gargoyle is a GUI for Open-WRT posters are also confused because of the listing in the main database.) https://forums.anandtech.com/threads/buyers-beware-netgear-nighthawk-r6700v2-is-no-longer-broadcom-soc.2511871/
Sorry, I'm a little touchy about this subject. Maybe I'll try again myself!

Yes of course. At least I think so.For a long time no Open Source firmware was available on any router using Mediatek mt7621. Parhaps that's changed recently. My model number is R6700v2. DIR-509 may be a "dummy" model, but it's a dummy model for another router from a different company altogether, D-link! DD-WRT has only version 1 on it's database (but if someone has a version 3, the image would probably work, as Netgear returned to using Broadcom SoC. The internet records a bunch of users on a search for compatible images without luck. You can read this in Amazon reviews among other places. Look for the 1-star reviews

also https://forums.anandtech.com/threads/buyers-beware-netgear-nighthawk-r6700v2-is-no-longer-broadcom-soc.2511871/ I'd look up other routers that use Mediatek chips before trying the R6700v2 image.

"The original R6700 used the exact same internal components as the R7000 (AC1900) model. i.e. a Broadcom dual-core chipset at 1Ghz. It only lacked a special slightly faster WiFi mode at 2.4Ghz and the additional rear USB 2.0 port from the R7000. - The R6700v2 uses a MediaTek chipset and is now advertised on the box as a 'dual-core' processor."
You're right IT IS IMPOSSIBLE TO INSTALL WRONG FACTORY IMAGE! But users will assume there is something else wrong, they are doing something wrong, because the supplied information is wrong! It is presenting R6700v2 as a model that Open-WRT will work on. It doesn't!
The database and download section are offering an image that's impossible to get working. Your answer would upset me, except I think maybe you misunderstand that this is a documentation problem, not installation (hence why I'm posting on the Documentation section.

Continuing the discussion from Netgear R6700 version 2 mix up with D-Link DIR-509:

Not only is the documentation page in severe error listing this router as the wrong device entirely but I can confirm that the snapshot image will never work. It will cause a brick should you try and use it, each and every time. The only avoidance to this so far I've found is to immediately apply the sysupgrade image over the top. That's the only way it doesn't brick. You can't install a GUI first even. Nothing at all can touch the snapshot or it bricks instantly basically into an unresponsive and unreachable state that it's even hard to unbrick from. I've reproduced it many times. Something seems to be very broken there and I suspect it could have to do with the incorrect documents meaning incorrect code is happening. That other device there doesn't exist. It's not just a "dummy device" but in fact one from another brand so it's very possible this could produce issues. I've seen less do so. Please correct the device page and consider looking into whatever catastrophic issue is occurring with the snapshot as well as I don't seem to be the first one to find out it bricks things.

Something seems to be very broken there and I suspect it could have to do with the incorrect documents meaning incorrect code is happening. That other device there doesn't exist. It's not just a "dummy device" but in fact one from another brand so it's very possible this could produce issues.

There is nothing wrong with the dataentry page.
DIR-509 has been chosen on purpose,

I thought that would be clear when looking at Netgear R6700 version 2 mix up with D-Link DIR-509 and focusing on the blue marked areas.

You are of the very wrong opinion, that anything in the dataentry could influence the OpenWrt code. Rest assured, it does not.

If your opinion would be right, this DIR-509 would influence all 1566 devices listed as supported by OpenWrt, because this DIR-509 can be found on each an every single dataentry we have (1721 dataentries including the unsupported ones).