Mochabin is an open source quad-core networking board focused on hi speed connectivity with Wi-Fi 6, 5G, and 10Gigabit ethernet The mikroBUS™ socket comprises a pair of 1×8 female headers with a proprietary pin configuration and silkscreen markings.

UPDATE2 : Revision of the block diagram !

UPDATE3: I am not affiliate in anyway with GlobalScaleTrchnologies, Marvell, or any competitors company.
My ideas are only personal and try to stay as neutral as possible, with technical experiences and knowledge sharing in mind...

1 Like
Looking for hardware
Interest for Crowdfunding Open Source hardware?
erdoukki October 4, 2021, 4:30am #2

Mochabin powered by Sartura. As a vital software partner behind the ESPRESSObin, Sartura will provide critical deliveries to strengthen the Mochabin software ecosystem. The Mochabin platform will leverage mainline Linux, OpenWRT, and Replica.one support out of the box.

At first glance it looks pretty sexy to a networking nerd like me. Seems to be prices between $159 and $225 depending on options like a 2x2 wiFi6 etc. Personally I don't need 10Gb ports but everything else looks interesting on the surface. Does anyone think it could do SQM @ 1Gb+ speeds and handle wifi6 and media server duties for a typical home all at the same time though? How about an extra step of adding a 250MBit wire-guard connection for security would it be too much for that cpu? I wish they would show it in a finished case with a few high gain antennas sticking out for good measure but thats just my aesthetic side talking.

I looked up their older previous model expressobin that was started in 2017 discontinued in 2020 and it is indeed supported here on OpenWRT so that makes me happy. That and they appear to be still actively supporting the older expressobin. That makes me feel relieved that this is NOT some fly by night outfit. https://openwrt.org/toh/hwdata/globalscale/globalscale_espressobin_v5_0_1

I think depending on what you guys say to my questions I am really tempted to fund this. But I don't do anything half cocked. I need days to do proper research on the company and people behind it before I would give them money. Thats just how I roll. LoL the bad part is that I dont even need one! I am stuck on a 50mbit internet connection and could use any old junky off the shelf all-in-one for that! I just have networking hobby and like elegant things and have been passively keeping an eye out for a compact all-in-one device like this.

expressobin that was started in 2017 discontinued in 2020

About EspressoBin;
They are still in store !
They still sell EspressoBin v7 with or without eMMC...
They also have a EspressoBin-Ultra but there is still an issue with the 1.2GHz !

They also have been mainlined in u-Boot bootloader, Linux kernel, and OpenWrt, as other main GNU/Linux distributions.

This was already the case of their past products like SheevaPlug, GuruPlug, and others...

A little out of topic from the MochaBin.
More powerfull.
Same CPU performance as the RPi 4.

With a mainline it may be a good board.
Hope so, I have crowdfunded one of the Early Bird !

EDIT :
You may also find criticism about their devices, but it is more a problem from Marvell SOC Support ! 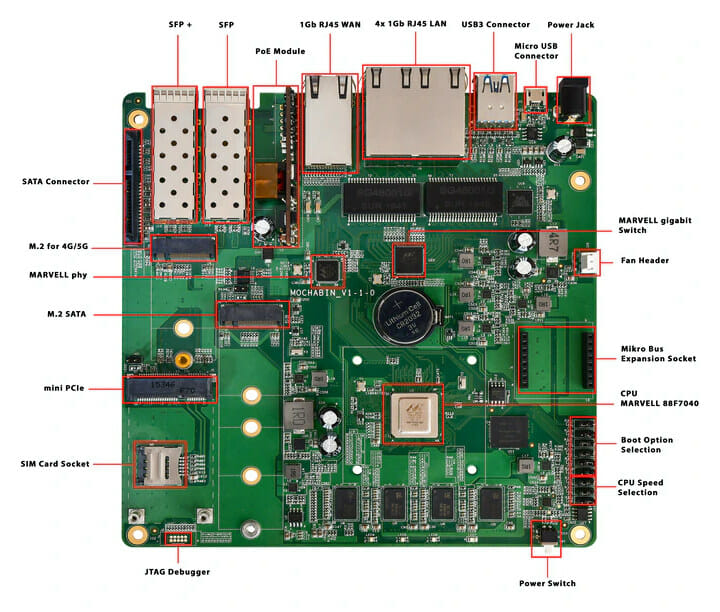 Globalscale Technologies has a follow-up to their low-cost ESPRESSOBin SBC based on Marvell Armada 3700LP SoC. The MochaBin-5G SBC is powered by a Marvell

EDIT(2) :
About performances, WireGuard and others, I actually use EspressoBinv7 as router with permanent WireGuard tunnel.
I have two ULTRA in 24x24 for my dockerized : LogitechMediaServer and NginxProxyManager+NextCloud.
NextCloud is a little slow, because of the CPU, will be better on the MochaBin !

As far I read the schematics, this board only has a single mini-PCIe slot with a PCIe x1 lane (the other two are mSATA-only and USB-only), allowing to connect only a single WLAN card (so you'd have to decide for either 2.4 GHz or 5 GHz, let alone 6 GHz). Making this an interesting and capable device for wired routing, but not really an option for covering wireless capabilities.

You can also use the BroadBand M2 for BroadBand 4G/5G or WiFi...

Yeah, the "cellular" M.2 slot is USB-only (so not an option at all for AP usage, as there are no half-decent USB WLAN chipsets capable of AP mode).

--
Yes, there is also Mediatek mt7915dn with concurrent dual-band, more reasonable than NXP, but not really what one would want either.

Still in pending status, another company, like Marvell do, which keep too silent about helping efforts of community developments !

Mochabin is an open source quad-core networking board focused on hi speed connectivity with Wi-Fi 6, 5G, and 10Gigabit ethernet

Agree with slh on both the wifi support, and lacking in proper PCIE slot.

May I suggest replacing the onboard wifi with a popularly supported chipset, and make at least two PCIE slots available.

That will be pretty awesome.

May I suggest replacing the onboard wifi with a popularly supported chipset, and make at least two PCIE slots available.

It is not an onboard WiFi.

It is an optional PCIe.

Not designed to, but sure it might be great...

Not only that, but USB 2.0 only according to the block schematics. This is a bit disappointing for anyone looking for a 5G-router capable of moving more than 1 Gbps between an ethernet port and the cellular network. This is obviousl not the board for that...

I can understand that we have to accept a few compromises. But there is a USB 3 hub here, serving two USB A connectors. IMHO, that's a pretty stupid priority. They could have added USB 3 to the m.2 slot for free. If the number of hub ports is this limited (I haven't checked), then it would still be better to remove one of the external A connectors. You can always add an external hub if you need more ports. There is no way to fix the m.2 slot. It's forever locked to a bandwidth you easily can move with much cheaper hardware.

For one I would drop the 15+7 SATA in favor of PCIe on M.2 so that NVME storage or WLAN cards can be used.

But, I can share that we will be upstreaming the U-boot and ARM ATF support rather soon so that whole stack will be as open as possible.

It’s seems to be a hard sell to openwrt, or any group aiming toward wireless router development.

Marvell for wifi? No thanks, not after the wrt3200acm!

Good thing is that that WLAN card is an optional extra, I would just get a decent ath10k/ath11k card instead.
That thing is not supported by upstream in any manner, its just the NXP SDK that supports it and good luck getting that working on newer kernels.

Hi bmork and erdoukki, thanks for bringing this to our attention. I agree we should be pulling the USB3.0 interface from our hub chip to the M.2 interface reserved for 5G. the hub chip supports it and I think this was an oversight from the previous 7k design which was just to support LTE radios. well implement in the next revision and for all of the board backers of the campaign. you can see the change has been made on the campaign now.