fwiw, if you want faster wifi speeds, you may need to consider installing a separate wireless access point running OEM firmware for maximum performance. OpenWrt wireless is often inferior to OEM firmwares in my experience.

For my Xiaomi 4A Gigabit with 21.02.x, I recall routed speeds from WAN to ethernet LAN were

Not really, there is a difference between the advertized data link rate - and the effective throughput you can get at your clients. The advertized top speeds of modern routers are given with all rf chains used (3x3, 4x4, up to 8x8 for wifi6), but your clients are mostly 2x2 (notebooks, good phones), 1x1 (IoT, cheap phones, USB cards, cheap tablets, cheap notebooks, ...) or maybe 3x3 for very high-end notebooks. With 802.11ac, 2x2 (@80 MHz channel bandwidth) leaves you with 866 MBit/s link rate at most, which -in practice- allows you speeds (rule of thumb, roughly half) around 300-350 MBit/s, maybe 400 MBit/s under ideal circumstances.

If you want more than that, you either need to increase the number of rf chains (~antennas) on both client and AP - or move to 802.11ax/ wifi6.

Thanks for the picture. It helps me to understand how it works.

Also, thank you @slh for your explanation. But a Samsung S22+ should be able to use the full 160Mhz if it would be shown, right?

160 MHz rarely works, half of your bandwidth always overlaps with the DFS range, meaning you're very suspectible to interference and radar events (and false radar events, caused by interference from your neighbours). Unless you're in a shielded rf lab, live in the sticks far away from airports, ports, military, weather stations and neighbours or can use the 6 GHz band (even shorter range, fewer competition), you'd be better of with 80 MHz channels.

The more you push it (160 MHz), the more you challenge hardware, firmware and drivers, some will stand the pressure better than others.

in my case, with a totolink a8000ru, i set channel 36, width 160Mhz. My phone is a samsung S20, and it connects using 80Mhz. not 160Mhz but at least it can connects and it works...
if your radio doesn't even want to start, then there must be a bad setting combination somewhere ?

So your device says :

you can try to troubleshot your problem with this free tool : Acrylic wifi home 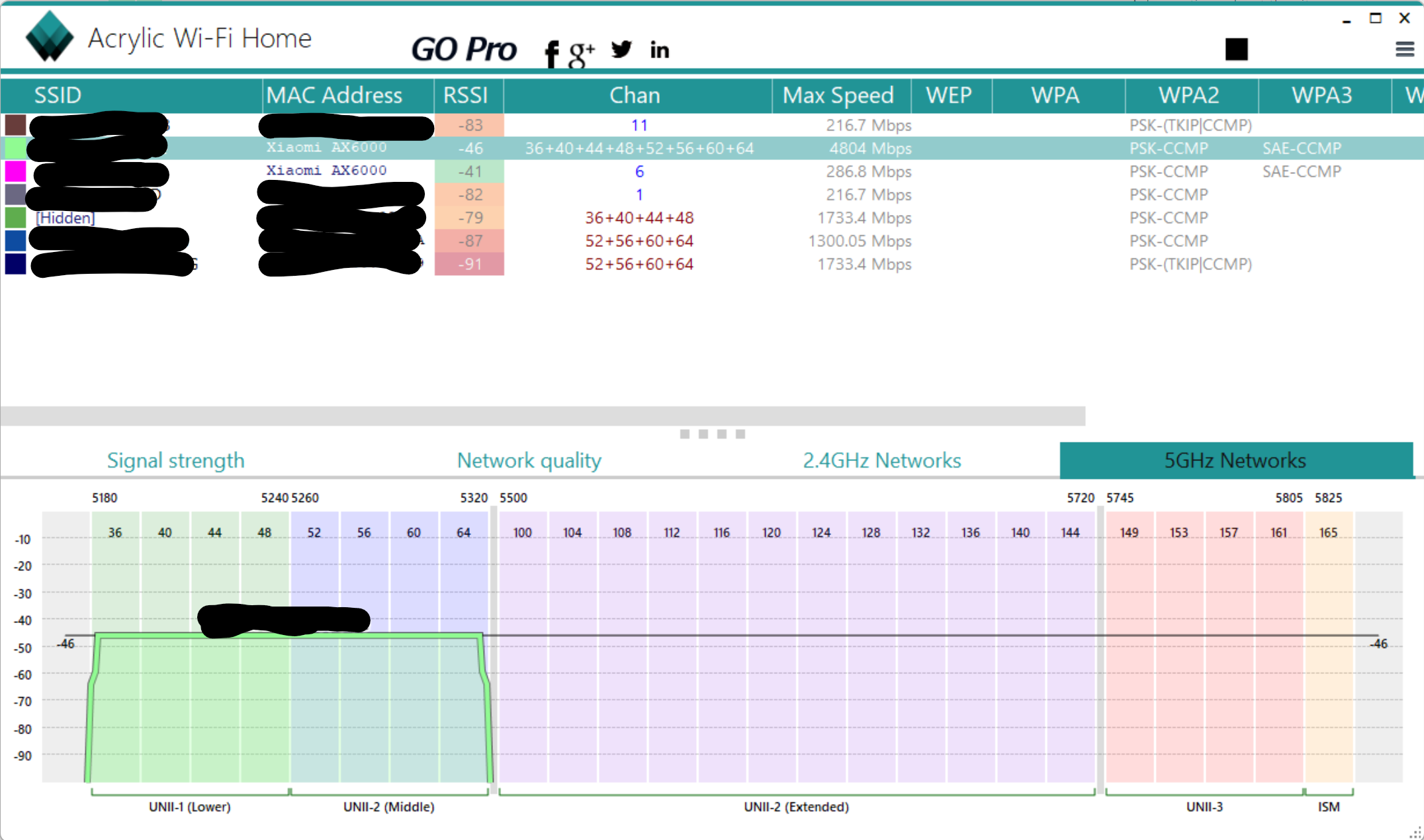 Thanks a lot for the help. I've tried all the combinations of channels with 160Mhz to no avail. Maybe with further fixes to drivers something more can be achieved. To be honest, the speed is lower than with the old router, but the perceived speed on my smartphone is better, so I'm ok with it.

I could try with future versions of OpenWRT if 160Mhz is available, but maybe as @slh said, it's not worth it. If I try it in the future and it works better, I'll update this thread.

C6v3 doesn't support 160mhz or dfs channels even with the stock firmware, so maybe a hardware limitation?

And from the Spec page :

Ahhh! Then the problem is with OpenWRT that should not allow 160Mhz. Thanks for finding it for me.

"leaves you with 866 MBit/s link rate at most, which -in practice- allows you speeds (rule of thumb, roughly half) around 300-350 MBit/s, maybe 400 MBit/s under ideal circumstances"

but according to the command output : iw list
the driver says :

I don't know why. This is what I see:

maybe this issue should be reported here : https://github.com/openwrt/mt76/issues

EDIT :
Sorry, i opened my own topic, i don't want to hijack this one as my router is different.

Maybe the OpenWRT frontend (LuCI) takes the information from there...

As @slh mentioned, there is a difference between "theoretical" and "real-world" speed.

Redact the passwords in the "option key" sections.

Post the results in preformatted text, by using the icon highlighted in red...

As you can see in this graphic, channel 36 at 160 MHz overlaps with 14 other channels -