I have an issue with my Access Points. I have 5 pieces of CISCO Meraki MR16 all running OpenWRT and connected by wire via switch to main OpenWRT router build on PC.

All Access points have their connection to internet speed limited to about 50Mb\s up and down. Masured on devices connected to AP as well as on AP itself (netperf) - no difference. 2.4Ghz and 5Ghz scores are the same.

Internet connection speed is symetrical 1Gb\s. All other devices connected to switch goes on full speed. Only Merakis have problem.

Any suggestions where to look?

If you set country to driver default and reboot the access point, does that make any change in wifi speed?

Thank you for your reply!

Unfortunately not.
Still the same score:

In my opinion it have nothing to do with radio as I run test directly on AP which is conected via wire to network and get same speed score.

Install ethtool via opkg and check your meraki to switch link.
If you have issues there you can use the same ethtool to force link speeds

Is it possible to configure eth0 speed? Or it's just about firmware that won't support it?

Eth speed is more about hardware and not firmware, both endpoints and cable must support the same speed.
If you have 100/1000 in one device and it chooses 100 then the other device or cable can’t handle more than 100.

But that alone doesn’t explain the speed around 50Mbps. It could be that it runs half-duplex instead of full duplex.

Can you bring one of the merakis directly to your switch and test with a patch cable that is known to support 1Gb/s, or check with another device at the ethernet wallplug usedby the merakis? Maybe the problem is in your wirings. If one of the cables is not correctly wired at the wallplug, then usually you only see 100Mbit/s instead of 1Gbit/s.

You can also try to force the speed. I've seen recentlyq devices that can't negotiate it correctly

But still no luck...

I did one more thing. I changed firmware into newest that LuCi let me flash:

No difference at 2.4Ghz but i get around 70 Mb/s on 5Ghz. Netperf directly on AP still gives the same results...

Force speed…yea but if the hardware works this auto speed negotiation pretty much never fails.

What device do you have in the other end of the cable and what eth speed does that have?

What device do you have in the other end of the cable and what eth speed does that have?

I tried cat5e and cat6 cables even cat6 25cm long cable of course ready to use not made by my own.

I suppose I don't know how to use it 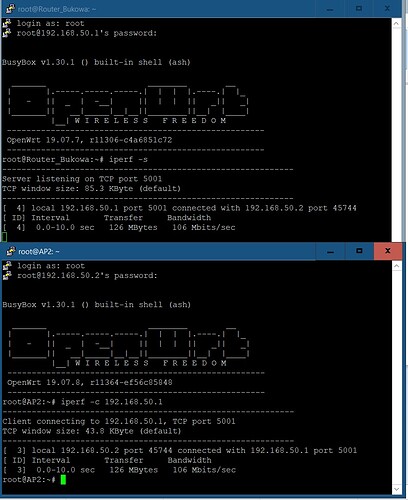 Looks like real connection speed is still 100Mb/s even when it's forced...

fwiw, what wireless device are you using to measure the speeds?

ie. are you using a phone with single stream wifi, or a laptop with 2x2 stream wifi card?

Ok, thanks. I'll try it later on today.

Network has about 50 clients connected. It was masured on about 10 different devices connected to different Meraki's. Scores are the same.