The untagged Network 1 already exists, another router in the house provides DHCP addresses in the 192.168.0.0/24 range.

The OpenWRT device has WiFi and 3 devices provided by DSA on the 3 port gigabit switch:

I also have two bridges configured:

I finally have the default LAN and WAN interfaces configured to use these bridges. Each interface also has two WiFi networks configured (2.4GHz and 5GHz each) so that I can access both the NATted Network 2 (10.0.10.0/24) and the WAN Network 1 (192.168.0.0/24) through this OpenWRT device on respective WiFI networks: 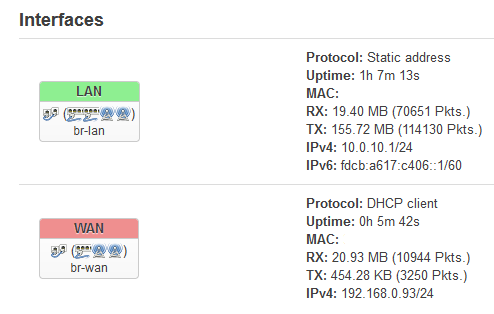 This setup works perfectly. I am able to access both Network 1 and Network 2 through this OpenWRT device using the respective SSIDs configured for them. However, I wish to also provide access to Network 2 (10.0.10.0/24) through the wan device on VLAN 11, which I have not yet been able to achieve.

I have tried various combinations of bridge devices with VLAN filtering and virtual ethernets for VLAN under 802.11q, without much success. I have tried so many combinations I have unfortunately lost track.

Tagged and untagged on the same cable is not a best practice but here it appears that you are trying to backfeed tagged packets into an unmanaged network consisting of an ISP router and an unmanaged switch. This is also not certain to work depending on how those non-vlan-aware devices handle tagged packets.

If you want to try though, the best way with DSA is to:

The critical point is that everything inside br-eth is tagged, including the connections to the higher level kernel networks. Tags may be retained or removed on the external cables.

Wow, okay, I did not see that being the way to achieve what I wanted, but it worked! Thank you.

For future reference for myself and others who may want to do the same, here is my new configuration:

Interfaces are configured with their own br-wan and br-lan bridges still, to allow WiFi networks to be attached to them. 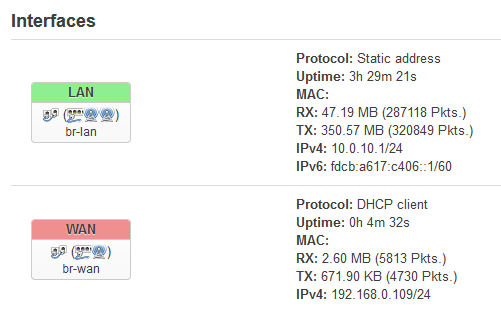 The following devices are present, consisting of the 3 bridges, 2 VLANs for the br-eth and the 3 ethernet ports: 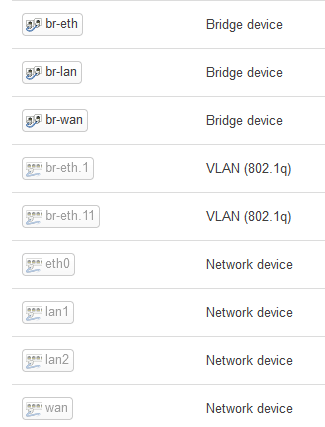 Bridge br-eth is configured with VLAN 1 being WAN and VLAN 11 being LAN, as so:

Bridge br-lan is configured as so:

Bridge br-wan is configured as so:

Hope this helps someone else too!