Since upgrading from latest 21.02 release to 22.03, I'm seeing a 1.5-4x increase in CPU load across all my devices (router, wifi APs, wifi bridge/repeater), at least the normal "idle network" condition.

I can tell this is consistent since I'm monitoring my nodes and have full grafana history for typical load-curves, and it's obvious as it gets when graphed out like this:

This is for my "main" AP in my home-mesh, but all other OpenWRT devices are showing a similar increase in base-load, while otherwise idle:

So everything from a 1.5x increase in idle load to almost 3-4x. That's quite a dramatic change!

Is this to be expected? Is this a side-effect over all services now being run through ujail?

Or have people simply not noticed, since they aren't graphing/monitoring their units like I do?

While all my devices are currently managing "fine", I'm curious about how this will affect the capability and capacity of the unit under actual load.

If the base-line increase while mostly idle is 3-4x, should I expect the same under load? I.e. that something which used to cause 10% CPU usage will now instead cause 30-40% CPU usage instead?

In short: Should I be worried?

Yes, you should worry about energy bills going up. Do you have something to actually measure the power consumption of those devices ?

Your Archers do not have the same HW, SW or networking that couls explain the idle load differences (between them, not between owrt versions) ?

I am curious about this. Has anybody else mentioned what the root cause of this additional CPU usage could be? 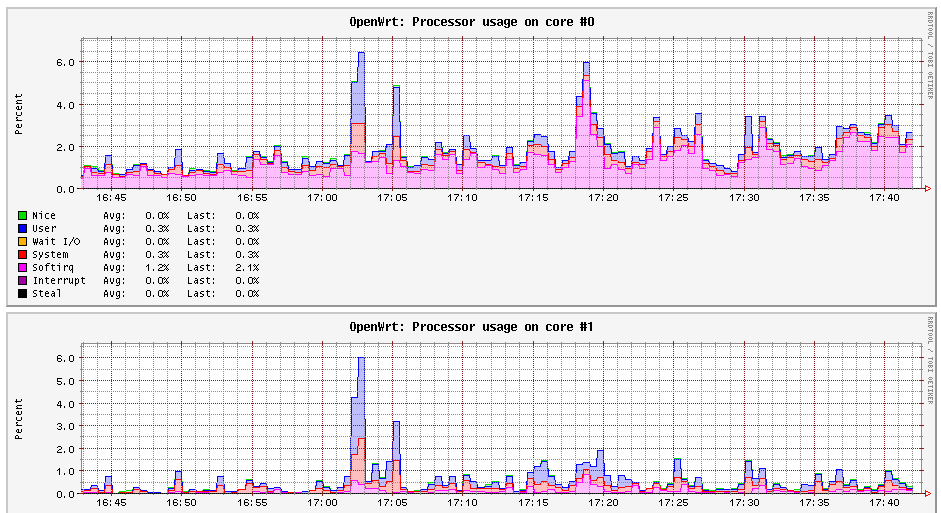 From what I can tell, top level processes causing increased CPU-usage seems to be

Besides that the only non-default package I have added is dawn, occasionally gobbling 1% CPU and going away again, so I don't think that's the culprit either.

I'll need to run 2 units side by side with 21.x and 22.x to get real actual data about how much these processes differ in the real world, I guess?

I don't think this is related to the base system (kernel, procd, etc) or ujail. I have an Archer C7 v2 that I upgraded from 21.02.3 to 22.03.0 and I don't see anything different in terms of CPU usage. I do, however, only use this device as a wireless access point without the web interface, so my package set is very minimal (custom image without luci/uhttpd, dnsmasq, odhcp6c/odhcpd, firewall4 ...). I run hostapd and ntpd in ujail, so ujail itself shouldn't be the culprit either.