I'm new here. But have been using Openwrt since 2017 in one router the I bought from one friend.

I would like to create one Openwrt Lab in one Virtual machine (VMware). I already istalled it, but I see that's there's no Wan interface and don't have Switch option in Network menu.

There is any way to I solve this?

@Fperuso, welcome to the community!

There is any way to I solve this?

But unfortali not worked... I added 2 network adapters, all like Bridged network conection... but the same problem, only one interface shows like "LAN"

OK, now setup the other Interface as WAN.

Sorry, I'm a basic user of Openwrt, but until where I could see when I go to the Interface in the Physical Settings(on Luci environment) it's only shows me the "Eth0", does not have ant other interface.

I tried to put the image(screen shot) of my VM machine, but I didn't find a way in this post. I'm using VMware Workstation 15.5.1 and I choosed ghest operation system Linux version Ubuntu... and 2 Networks adapters like a Bridged(Automatic) with the status checked like "Connected" and "Connect at power on" and the Eth1 no show in Luci or in ifconfig adapters(comand line) 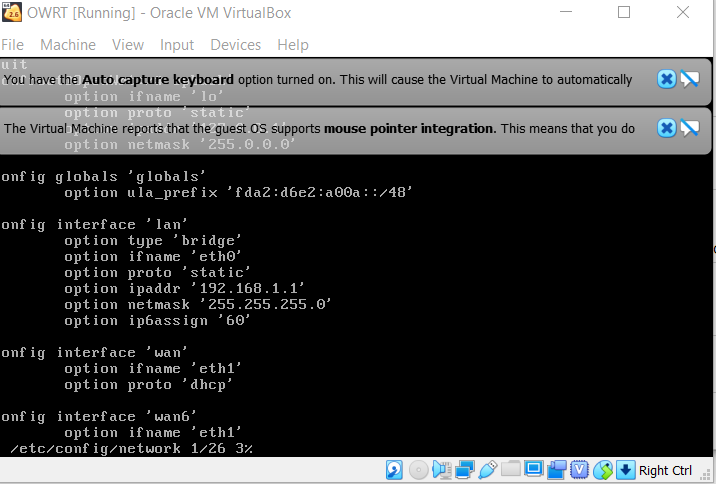 If you initially setup the VM with two or more NICs, it should automatically create LAN and WAN on first boot

So am I. I tested/screenshotted for this thread.

After setting two adapters try to reset to factory: https://openwrt.org/docs/guide-user/troubleshooting/failsafe_and_factory_reset#soft_factory_reset

I saw that you was using Virtual Box. Could be a problem with VMware... Do you have a VMware to simulate this situation?

How are you setting up your VM, I have a feeling you never did what I suggested, as you never noted that you had?

After setting two adapters try to reset to factory:

This doesn't work on EXT4!
Please do not confuse the OP.

If you're unable/unwilling to configure WAN yourself:

Simply booting a fresh image/VM with 2 NICs works for me.

The same problem... I will try Oracle Virtual box...

And you setup 2 NICs before booting the first time?

Odd. Then upon booting, you should have:

All done. But not worked... I'm setup VirtualBox to try

I Converted the file with qemu

I should note, I'm using VirtualBox for Linux, so QEMU/KVM works (as it uses some libraries). Further, I've used pure QEMU/KVM also.