I bricked Xiaomi 4A gigabit Edition on the first hour

I own Mi Router 4A Gigabit Edition the Chinese version (from AliExpress).

I tried to update the router via OTA but it bricked because i lost power mid update and I wasted countless hours trying to flash a firmware into the router using “MIWIFIRepairTool” from the official Xiaomi website and also tried TinyPXE and Bootp TFTP but non worked, I used “miwifi_r4a_all_cddf4_2.28.69.bin” and the older version “miwifi_r4a_firmware_72d65_2.28.62.bin” (both from official sources) but to no avail, I followed the instructions exactly.. turned off anti-virus, changed the IP to 192.168.31.100 and 192.168.1.2, connected the router to my pc via ethernet, pressed and held the reset button then connected the router to power till the router started flashing yellow and then used the tool.

Do you have a hardware flashing tool that you could hook up to the NOR flash directly, like e.g. one based on the CH341a-chipset?

Moved to the Installing and Using OpenWrt forum.

you got led blink yellow, that means your router still under the bootloader control, not bricked.

try to back to stock fw again.

Have you tried an older version 2.18.28.bin?
https://forum.openwrt.org/t/xiaomi-mi-router-4a-gigabit-edition-r4ag-r4a-gigabit-fully-supported-and-flashable-with-openwrtinvasion/36685/747

Thanks WereCatf for the reply,
I was considering buying the tool as last resort, but i thought maybe someone has easier solution.

Yes i did try the firmware, also the global firmware, the non-gigabit firmware, even R3G firmware.. the only difference is when i try 2.18.28.bin the router refuses the firmware instantly instead of a one second delay (solid yellow) compared to the newer versions

The router completely refuses every firmware i give it.. i gave it about 8 different .bin files but same issue

Maybe someone can still come up with something else. I tend to just flash the chip directly, so I do not have any knowledge of trying to recover Xiaomi firmware in any other way, though. If/when you decide to buy the tool, I can then help you repair the router's firmware with it, though.

Do you have a UART-to-USB tools to check the log info from Uart port when startup?

I ordered the tool.. it’ll take some time to arrive.
I appreciate your help <3

Hi, everyone!
I am new for OpenWrt. I think I bricked my xiaomi R4A gigabit Version2 device.
I will need the followings? Could anyone please help directions to obtain those files?

Please help for directions !
Thank you so much!

hey there, i just tried TinyPXE4A with the bin file you provided but it didn't work (same issue).
is there something specific i need to do? 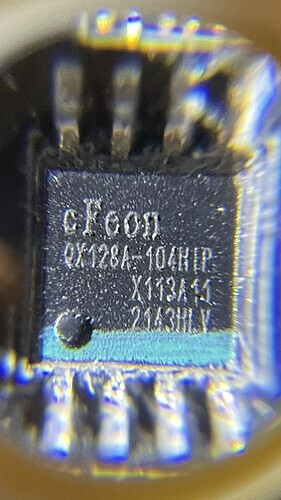 here's the chip if that would help, thanks.

First, you need to make sure your device version. The bin file 2.30.25 is for Xiaomi R4A v2 Gigabit Edition (R4AGv2) . That is a 2nd version because they updated their hardware. If yours is v1, you will need the earlier bin.

I also had this kind of purple glow during messing around with the router for first time ...

Remove the plug from your router

Hold the reset button while the adapter is removed

Then reboot and go to router.miwifi.com and change the settings

Hi everyone First of all thanks to these awesome developers for creating and maintaining openwrt.. I have been using Openwrt on my Xiaomi router since the last 6 months everything was going good.. Recently ( because of my stupidness ) I wanted to clean up unused packages on my openwrt firmware so I ran the command "opkg remove --autoremove '*'" Which mostly crashed my router and deleted important router packages such as luci app kmod for mt76x2 etc etc Now the router was still on for few ho…