How to install OpenWrt on Fortigate 90D? | Decoded BIOS

Hi, I have a lot of out of licensed Fortigate90D devices so i want to reuse and run OpenWrt on them. I have dumped and decoded the bios and got some useful datas, according to them we can see u-boot.bin, u-boot.bin.cpu2 and fsoc/spi_boot_fsoc.bin images. So i want to know how we can extract these bootloader images and so install OpenWrt.
Does it applicaple ? Thanks for any help. 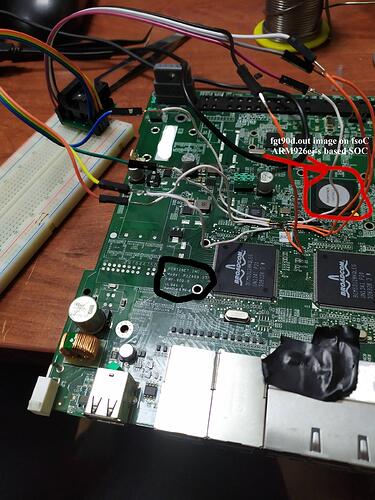 Start by locating the serial console.

See if we can get a dump on the boot sequence, and if the boot loader can be interrupted.

I am not able to interrupt the boot loader. It is not asking to interrupt with any key may be a hidden key combination? Is it possible? Is there any other way ? According to dumps It updates bootloader with u-boot commands in the background.```

If there's a menu one could think there should a way to interact with it.

The u-boot can be made read only by parameter, or by tampering with the RX
connection on the PCB, forcing you to solder a bridge somewhere, to activate it.

Hmm thanks, It seems hard to find that connection on the PCB

Is there a way to find that? any tip

Not really, need to follow the pathway from the RX pin on the PCB, see if there's an intentional break somewhere.

If that is correct, as in 4 MBit == 512 KByte flash, you can stop right there. It's very hard to get OpenWrt working with 4 MByte, but anything less is impossible (no version of linux will fit into half a megabyte of storage). ARM926E-JS is also a rather ancient ARMv4T SOC, which won't bring you much joy either.

If those are indeed the system specs, it's rather doubtful if this would be accepted as a new target for OpenWrt. Upstream toolchain (gcc, binutils, musl, etc.) support for ARMv4T basically no longer exists (at least not in a remotely maintained form), and adding a ton of custom patches for such an ancient SOC isn't likely to be accepted - but the flash (-size) issue kills this straight away.

Oh, sorry i wrote wrong above. It is 4MB SPI Flash. Thanks

The next step would be checking the available system RAM (ideally from the running system - or by visually identifying the RAM chips). Anything less than 32 MB would be a hard no-go, but even 32 MB will be tight.

As i mentioned above it has 2GB DDR SDRAM and SPI Flash only runs system BIOS not running firewall os. ARM based FortiSOC has internal NAND Flash Fortigate runs own firewall image on it and image size 926MB .