Continuing the discussion from Howto install OpenWrt on Asus RP-N53:

if this device contains full AC within it as it appears to... there are some serious safety issues involved here documenting hardware modifications without warnings... ( or at all )... death or serious injury can result from poking around in such areas... and i'm sure we don't want to be responsible for this happening to our userbase?

First of all, Linux expects the user to know what he is doing. The same is true for electricity.
As we see almost every day in the forum, users oftentimes do not know what they are doing.
A warning seems advisable.

Proposals for an infobox which can be included on all 80 devices which are listed as mains powered:

Which one do you like better?
Is the text clear enough for everybody to understand the risks involved?

thanks @tmomas for your swift and collaborative action on this concern...

suppose would be consistent/prudent to also attempt to implement a similar warning within the forum... either one by one per posts as noticed ( header? ) or perhaps a pinned topic in hardware?

I agree that the first one looks more intimidating. 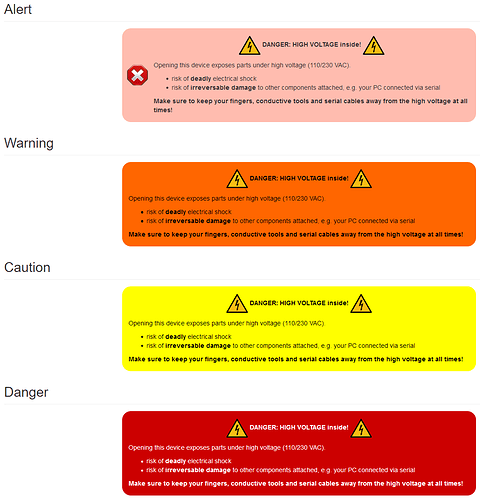 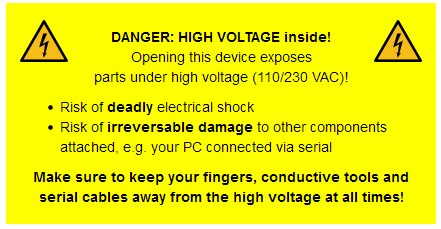 While I don't have a real preference for either of them, I think this is a good idea. A similar warning is probably in order for all devices with integrated xDSL modem as well, as the phone lines might carry up to 90 volts (one would hope that $user disconnects their device from the phone line before messing with it, but…).

Also, feel free to add this infobox to affected devicepages!

See https://openwrt.org/meta/infobox/start#high_voltage_warning_mains how to do this.

A similar warning is probably in order for all devices with integrated xDSL modem as well, as the phone lines might carry up to 90 volts 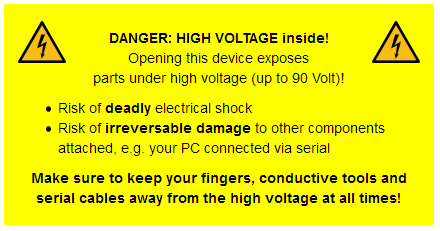 Feel free to add this infobox to affected devicepages!

See https://openwrt.org/meta/infobox/start#high_voltage_warning_dsl how to do this.

So nice, actually my new EdgeRouter 4 is connected directly to the 230V AC power line.

I guess that is why most home router manufacturers only use a AC/DC adapter with low voltage to get them CE approved so the customers survive when they lick on the connector or do something else they shouldn’t do.
I got the feeling mostly the industrial and business class network devices are the high voltage devices🤔 Since we can not scare anybody with "Low Voltage", how about this one: 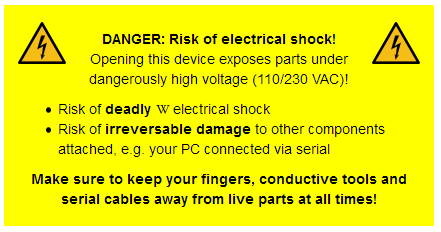 I tried to avoid "high voltage" in the last sentence and replaced it by "live parts", but
I'm not really happy with that yet.

Make sure to keep your fingers, conductive tools and serial cables away from parts under mains voltage at all times!

There are no real voltage level for high voltage per definition. If it can hurt or kill humans or animals then it is high voltage. That is all voltages that draw more than 30mA through the standardised human body or a animal.

High voltage per the definition of >1000V is the voltage level when the current starts to move as a corona effect, air is ionized and discharge length is 1000V/cm.

In Sweden we did name this from the year 1909 as Starkström (kind of ”strong current” in english) that had the definition of ”all currents that is dangerous for humans and animals”. And in the regulations (was called the “The blue book” because of it’s color) from the electrical agency had three chapters A (common rules), B with safety rules for voltage level under 1000V and chapter C with the safety rules when at voltages over 1000V.
But the definition of ”strong current” was in chapter A so it applied for both chapter B and C. Then someone invented the EU...

However in some countries if you label something as "danger high voltage" then there are rules where that equipment can be installed and signage that also needs to be erected in that area.

So by incorrectly labelling something as high voltage you create issues for the installation of the device.

Well this is the problem. EU has one rule, USA has another rule. Asia I guess have some rules.

The physics are the same in the whole universe but how the politicians has decided how the warning is supposed to look like is a circus.

We can’t even agree on a world wide connector standard...

One alternative is to leave the responsibility to the manufacturer of the hardware that at least for the CE mark is responsible of the electric warning.

How many devices have the actual problem that requires the user to actually open up the device to use OpenWRT?

EdgeRouter 4 and my EdgeSwitch has the console connector on the front or back panel. 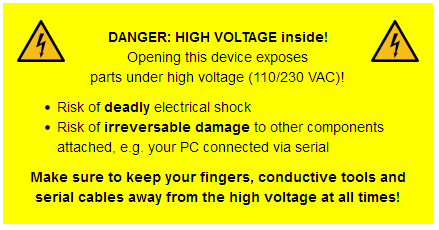 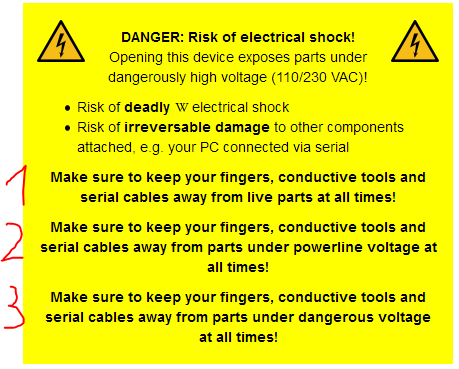 Shall we switch from original to modified?
If yes, which of 1, 2, 3 would you prefer (taking into account that we have users that do not natively speak english and possibly use a translator).

"Only qualified person should open device."

My reason is that the person should decide if they have the skills to work with mains voltage and only then proceed. There is more too it than not touching things. For example I have seen unqualified people leave equipment that they are working on in exposed state while they go for a lunch break or at home with young children.

"Only qualified person should open device."

Then you are saying: Any mains powered device which requires serial access (and hence opening the case) can not be flashed with OpenWrt because no user out there is qualified to handle mains voltage (exceptions confirm the rule).

Since users usually do not care about being qualified or not, we should at least give some practical advice that helps to avoid the worst.