Having trouble connecting to web after rpi4 install

so i am having trouble connecting to the internet after installing openwrt on my rpi4. i think my problem is with where i wire the cables. so i will probably have many questions within this post, so please bear with me because i have zero experience in networking, i just wanted a safer/faster internet connection for all my devices on my home network. before installing openwrt on my rpi4 my setup looked like this: 1 cable modem connected to netgear router (which is not able to install openwrt) and from that router i have 1 wired connection to a server that has docker containers and i connect my laptop and desktop wirelessly to that netgear router, thats it.

now the rpi4 that i have only has the 1 ethernet port but i have a usb to ethernet adapter to go with it. so in my head with the little knowledge i have, theoretically i should just be able to move my rpi4 in place of the netgear router i have, after the initial setup of course of getting an ip address and such. but that is right when i seem to run into trouble.

the tutorial i followed to get to where i am now is this one: https://www.youtube.com/watch?v=TsOpO6O4xDE it is at the 16:29 mark that i start to have trouble when he configures the WAN interface, he hits save and apply then goes to change the wires around but looks like he introduces a third ethernet wire that i have no idea where it goes to. he says 'computer' but does he mean router? because in my mind that is where it should be plugged into but if it really is computer, wouldn't the router still be in front of the rpi4? i thought the whole point was for the rpi4 to take the routers place? anyway, up til this point, how should my wires be connected? from cable modem to netgear router WAN, LAN from router to rpi4 ethernet port? then usb to ethernet back to router? or LAN on router to computer? but then my computer only has 1 ethernet port too so i dont see how i could plug another cable to rpi4?

(side note, whenever i get to this step and hit save and apply, i just get the countdown til it rolls back the configuration. and on my netgear router i did turn off dhcp server and have tried both enabling it as access point and not enabling it and no matter what i try, the countdown goes all the way down til it fails)

anyway, that is where i get lost. i know this is probably the oddest question in the world so major kudos to whoever even attempts at responding and many many thanks to anyone that tries to help me understand where 3 little cables go to.

cable modem to router WAN ... then,router LAN to whatever you want to connect to the internet

Not sure why you have netgear router involved ... the pi presumably is there to replace the existing router ... you don't want two routers 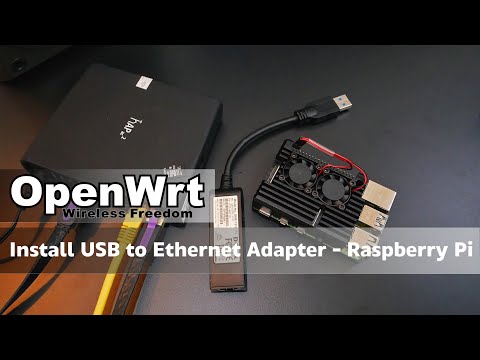 Not the best guide out there

I am using a Raspberry Pi 4 with USB dongle.

The most basic configuration you can use involves two interfaces: 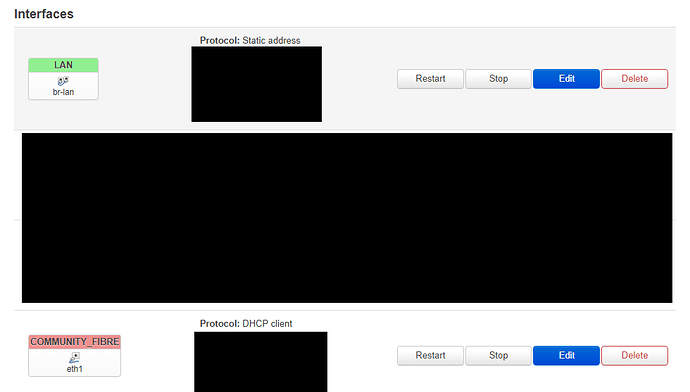 I would start by creating a wifi hotspot that can be used to manage the router. This will prevent you getting locked out if you mess up the LAN configuration. 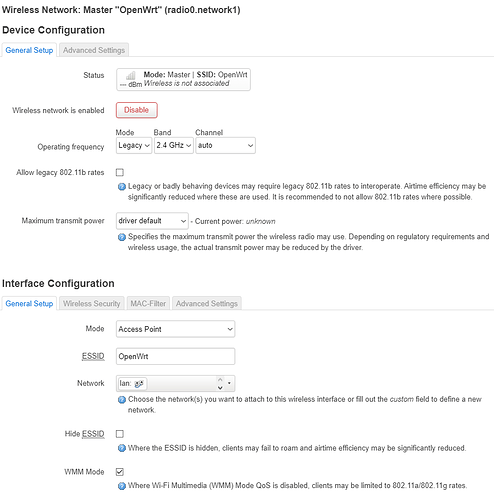 Once you're connected via WiFi, you can add the WAN and LAN interfaces.

Create the WAN link first. This will be a DHCP client. 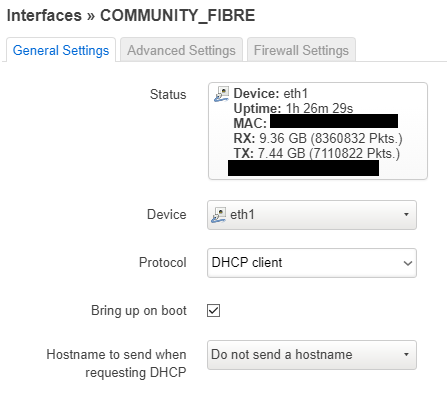 Add that interface to the WAN firewall zone.

Try adding br-lan via the 'devices' tab and select eth0 as the bridge port. 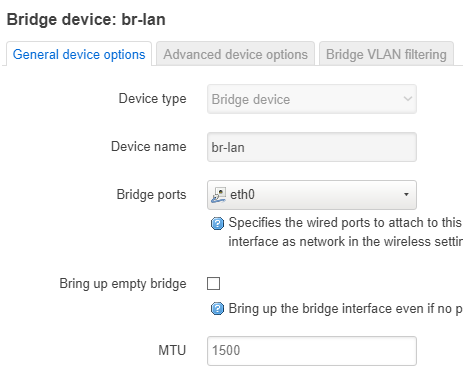 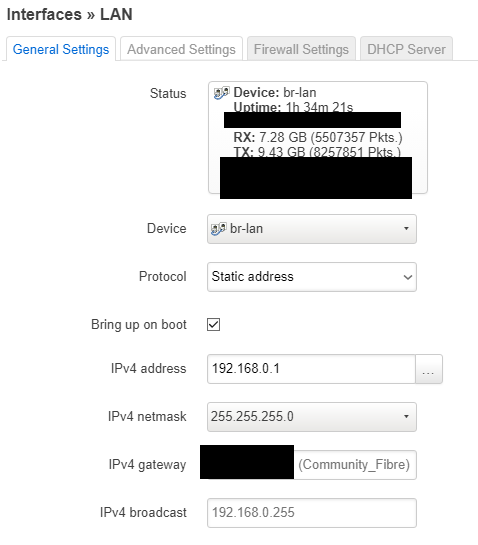 Add that port to the LAN firewall zone.

Save and apply all the configuration and reboot the router.

This is not as complicated as that video makes it out to be.

I delete the br-lan bridge and simply use eth0 for LAN since I do not enable the Pi WiFi. All wireless is through my wired Asus router now in AP mode.

I don’t think there are any downsides in this scenario.

I'm using VLANs and there were a couple of times when I locked myself out and had to nuke the router back to factory settings. Having the Wi-Fi as a backup was a lifesaver. I've configured it to automatically turn off after 20 minutes, so as not to conflict or interfere with my access point's signal.

dang u guys are helpful, im gunna try once more only this time using chatmandu and mk24's helpful points and hopefully get a connection. if not i'll reply back with what exactly went wrong and at what point and hopefully from there i can troubleshoot. but thank u again for the advice

ya im unfortunately still not having any luck. this time i installed a community build from here plugged my modem into rpi4 and usb dongle to computer and was able to view network on my computer but when i connected i had a whopping 25kbps connection that was in and out. i could log into luci but ping google.com gave me 'bad name' or 'wrong name' or something like that and ping to 1.1.1.1 kinda worked with almost 80% packet loss. and editing the network file in /etc/config/network i added 'option dns 1.1.1.1' and 'option gateway 192.168.1.1' rebooted but ended up with same results so i'm not even sure where the problem is. (could it be an issue with ISP or do they have nothing to do with this?) i was going to add a small 8 port switch but i cant even get the rpi4 up and running by itself. would i be better off maybe purchasing a router that is able to flash the firmware or maybe just leave things the way they are... at least i have internet this way