Since the corona happening, my home "server" is battling a RDP Bruteforce attack.
I am able to automatically ban IP-addresses on the "server", but i kinda want to block them on my router, before they even can contact my "server". (since i have more then 700 open connections bashing port 3389)
I made the following rule (with some example ip-addresses, i have collected over 300 addresses so far in 1 week....) : 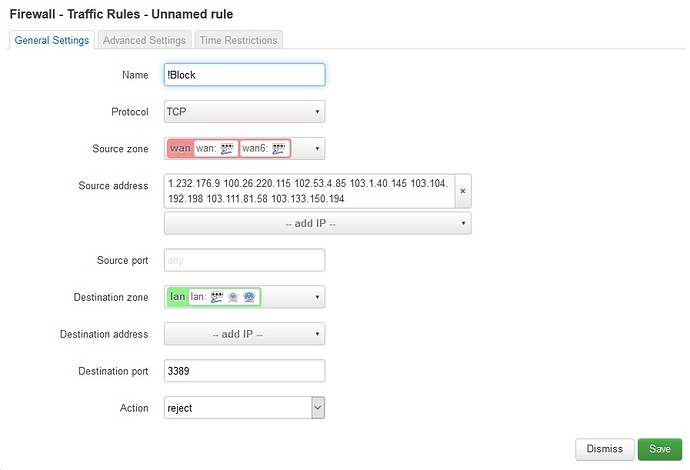 But when i enable this rule it completely stop WAN RDP connections.
(so bruteforce, as myself cant connect it anymore :P)

Can someone with greater knowledge assist me with some tips?
I use a default image of OpenWRT for my tp-link C2600

You may want to take a look at ipset.

But when i enable this rule it completely stop WAN RDP connections.
(so bruteforce, as myself cant connect it anymore :P)

You don't need that rule.
WAN to LAN forwarding is disabled by default.

The rule should be to reject these IPs at 3389/tcp on WAN, not LAN

I think it is correct as it is, as after nat prerouting the destination IP has changed already.

You don't need that rule.
WAN to LAN forwarding is disabled by default.

Port forward redirects will bypass that

I think it is correct as it is, as after nat prerouting the destination IP has changed already.

In your theory then the OpenWrt's CPU will process a NAT - then drop it.

Port forward redirects will bypass that

Yes, but this kind of rule is useless against botnet attacks.

In your theory then the OpenWrt's CPU will process a NAT - then drop it.

As long as the drop rule in filter is before the accept port forwards, then yes.

Thanks for the reply's, have tried all your advise with no success

i have installed the ipset thing but.... it has no GUI

@lleachii , can you explain a bit more, how to: "make a rule that blocks attempts for a time period of n - after x amount of tries"?
That also sounds like the thing i am trying to do here with this manual updating ip block list !
The idea is after 3x wrong user/pass then ban 4 life.

I don't think it's wise to try to self-maintain a list of IPs to block.

the source port doesn't really matter, does it?

It does and should be left blank; as you don't know the source port of the originating traffic.

@lleachii , can you explain a bit more, how to: "make a rule that blocks attempts for a time period of n - after x amount of tries"?

-Drop and Reject are kinda the same thing indeed, but they both give the same result

The idea is after 3x wrong user/pass then ban 4 life.

Set up a VPN, preferable WireGuard or OpenVPN:
https://openwrt.org/docs/guide-user/services/vpn/start

think its the best option use vpn
also, always when you public some service to the internet ALWAYS, IF YOU CAN, CHANGE THE PORT!
its the best, efficienty and easy method to prevent botnet attack
in your firewall rules can make the change and for your server its totally transparent
example
client try to connect :5000
open port in router 5000
router redirect port 5000 to 3389
server listen port 3389

ALWAYS, IF YOU CAN, CHANGE THE PORT!

True, as I noted:

use another WAN port (only obscures things)

Security through obscurity (or security by obscurity) is the reliance in security engineering on design or implementation secrecy as the main method of providing security to a system or component. Security experts have rejected this view as far back as 1851, and advise that obscurity should never be the only security mechanism. An early opponent of security through obscurity was the locksmith Alfred Charles Hobbs, who in 1851 demonstrated to the public how state-of-the-art locks could be picked....

It doesn't "prevent" - it changes the port; hence this adds no additional security to the server or network. This obviously won't stop WAN port scanning. Lastly, I don't suggest 5000, I would use an ephemeral port.

true my mistake
and the port yes, before you select a new port you need to know where is used those port and check (its bad idea to use tcp/22 port for example)
other possible solution its enable port knowking (https://openwrt.org/docs/guide-user/services/remote_control/portknock.server) but you need more tools and configuration.
maybe the same rdp protocol have some security features (i know the protocol but never i configured as server)

If you don't want to go for VPN you could setup a RPD Gateway also (as an alternative):

My advice is to whitelist (authorize) only the needed IP...
All the rest of the world will be blacklisted...
Already tested at a client site, without problems

The best method is still a VPN

RDP is the (open) door for ransomwares !

Just a SIMPLE list with ip adresses that aren't allowed, i can modify, and easy manage with a GUI.
That's it, that's all i request

I really want to thank you all for these comments and thinking along!

Is it btw possible to set a "hitcount" as argument on my 3389 port forward?
Have tried the option extra line from @lleachii , and some google around and found this argument:

But both don't work on the forward 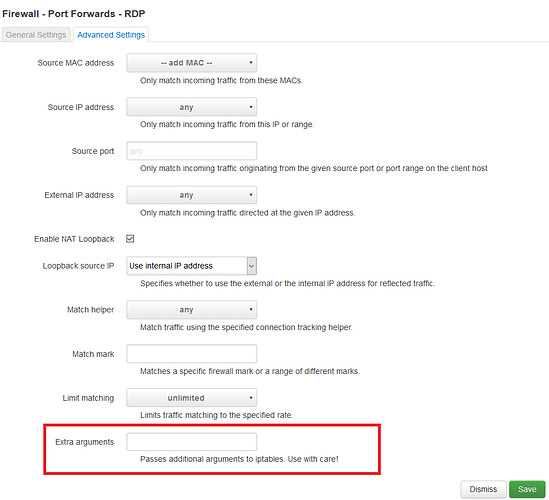 I cannot verify what package is missing because I don't have access to an OpenWrt box right now. But I'm sure you are missing the proper iptables module for this. Sth. like ipt-hitscan.