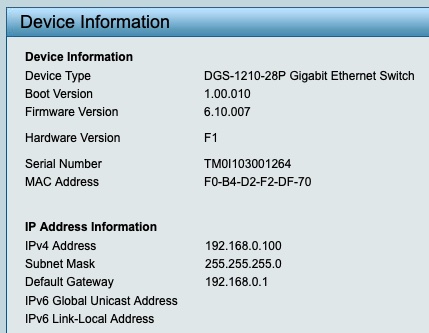 -its lying about in my garage and I have a project that needs many ports so I thought-why not?

Hi, I have recently bought the switch DGS-1210-16 https://openwrt.org/toh/hwdata/d-link/d-link_dgs-1210-16 in order to eventually run OpenWrt on it, like I have been doing with my TP-Link AccessPoint for years. Unfortunately it seems, that OpenWrt currently can#t be flashed from the web UI, nor via TFTP (I have tried with both the 21.02 rc1 and the snapshot release). I would avoid opening the case and void warranty if possible. Does anyone have an idea, what might need to be changed in the b…

but the upgrade via the UI keeps on failing-just comes up with a message saying the firmware failed (it looks similar to one you would get if you tried to up any router that supports OpenWRT-but your using a firmware on the target device that was for another manufactuer). I've did this countless times with no joy.

Has anybody managed to get this device flashed through the GUI?-happy to crack it open and do it serial wise but before I do that, reaching out to the community.

Has anybody managed to get this device flashed through the GUI

OpenWrt Installation is currently not available for web gui. See the reference git commit and

Hi @slh and @frollic, I successfully installed OpenWRT using the TFTP method. I figured out that the commit message is wrong. Installation is currently not possible via the OEM web interface. The switch needs to be opened and you need to attach to the unpopulated serial interface in order to enable TFTP boot. See: Support for RTL838x based managed switches - #1279 by exponentialverteilt Thank you for your help!

Thanks for the confirmation-unfortunatley, whilst trying to get the JTAG method done, I blew up the power supply on the board! So have ordered another one off Ebay-well, its a DGS-1210-16 time time, so it should be the same upgrade instructions....

Meanwhile, I'm trying the JTAG method on a DGS-1210-10P but for some reason (and tried 2 USB to serial TTL devices), I can see the output but any keystrokes from my Mac (tried it on a Windows machine as well) are not being recognised by the switch (specifically the ESC key when trying to stop autoboot)-I'm going to try perservering but will probably need to wait for Mr Courier to arrive

I can get into the switch with the normal GUI but no serial keystrokes-ah well.

As I understand, factory images should follow the same structure for the whole series, but best to check before potentially bricking your device.

28P and 28 are the same devices, just with a bigger PSU and PoE board plugged in.

The only thing that might be device specific, is the CAMEO_BOARD_VERSION variable, but I suppose the 28's factory image could be tried on a 28P without any issues then.

Cheers guys-unfortunatley, I cant get any keystokes recognised on the DGS-1210-10 model, so will need to wait until the "new" switch arrives-and then see how it goes (before I blew up the -24, the same USB to serial adaptor worked fine, so not sure what is going on there).

Its a G1 version-tried ecery combination but not joy-it just continues to boot-any idea why ESC wouldn't be recognised (using MacBook and SecureCRT V9.2.3)

Can you enter characters at a later point, once the switch has fully booted up?
Control sequences (such as [ESC]) can be a bit special, so trying alternative terminal emulators (e.g. GNU screen et al) might be worth trying, if you have an x86 system at your disposal, you might also try a linux live CD or Windows.

Only other problem is with 8MB flash, there's not much room left to put much on (and no USB slot)-but heh-ho-its been all good fun so far-thanks to the community

This is a switch, not a router. Therefore you shouldn't be putting much on it. The processor isn't up to doing much anyway.

Thanks-so a lot of effort for not much return but the main aim was to turn all the LAN ports into WAN ports, which is does, so all good. And it was a chance to improve my soldering skills