My question:
I got this working on Ubuntu and was using Parted there to create the OpenWrt partition layout for boot and root. But Parted is not in the opkg feed.

How should I make the partition layout on my raw image file when running the script on OpenWrt itself? I've tried gdisk but could not get the sd card to boot.

Maybe I should have made it fat32? Boot disks for EFI-based systems.

I think the boot partition must be FAT32. Pi booting is not EFI, it's strange.

When I view the OpenWrt Pi firmware in Gparted the first partition is fat 16 and has the partition labels - boot and lba.

I can reproduce that in a script on a system (Ubuntu) that has parted. But I want to run such a script on OpenWrt itself. I think my only option is to use gdisk or sgdisk which I'm not sure how to use.

This is the layout of an image file I made... when I dd it to an sd card it doesn't boot: 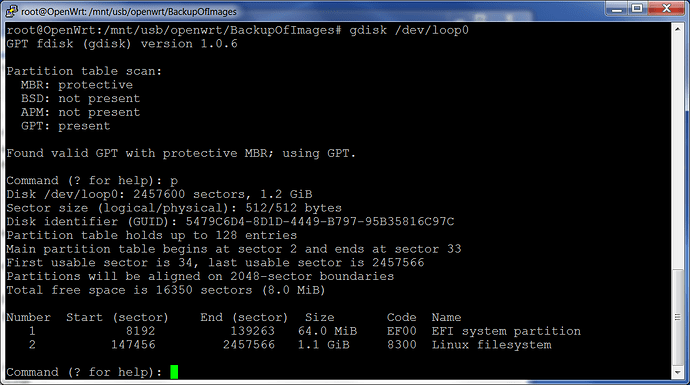 Every one I've looked at is 0x0c, FAT32 (LBA). Also the partition table is MBR only. I'm not sure if GPT is supported.

I create an image file like this:
# dd if=/dev/zero of=loopbackfile.img bs=4M count=300

I create a loopback device for it (e.g: /dev/loop0):
# losetup -fP loopbackfile.img

On Ubuntu I can partition this "drive"...

Then I can format those partitions, mount them etc.. I can then restore backed up OpenWrt boot and root file systems and write that image to an sd card and it boots in a Pi4.

Is it possible to do this all on OpenWrt? So far I think NO because Parted is not available. Fdisk can only make one primary partition and no ext partitions. That's the only reason I was working with gdisk and a GPT partition table.

but could not get the sd card to boot.

As far as I can remember, raspberries use the partition UUID to define the root partition. Look at your /boot/cmdline.txt and the param root=.

The copy of your root partition must have the same partition UUID as the original partition.

I got it working with sfdisk. I wasn't sure if fdisk could do it but it can it seems. Here is what I did...

I copied the partition structure from a working OpenWrt installation I have running in a Pi4.
# sfdisk -d /dev/mmcblk0 > mmcblk0.sfdisk

I restore this partition layout to loopbackfile5.img
# sfdisk /dev/loop0 < mmcblk0.sfdisk

After that I could restore rsync'd boot and root file systems to those partitions and it booted up!

Then can use Balena etcher to flash the .img.gz file to an sd card and it also boots.

This topic was automatically closed 0 minutes after the last reply. New replies are no longer allowed.