Guess I could put the LAN ports in different VLANs, done. But what about the multiple WiFi connections? https://openwrt.org/docs/guide-user/network/wifi/connect_client_wifi describes how one wifi connection is used as wwan. How would that scale to multiple wifis? Would one simply have multiple wwan interfaces?

On dumb AP you make one interfaces (unmanaged interfaces if the DHCP server is is the router) for each VLAN as a bridge connection to each SSID (what you call wifi).

OpenWRT can’t connect VLAN directly to SSID and radios, or at least not easily connect them to each other and make it work. You need interfaces to connect them together.

Each wifi radio can only be client to a single access point at the same time. You need to use two radios (2.4GHz and 5GHz, a USB wifi adapter, ...), try to trunk several networks over the same wifi, or use a wire.

I just tested that and can connect to two SSIDs (each 5 GHz) at the same time. They are on the same AccessPoint, though I don't think that makes a difference.

On dumb AP you make one interfaces (unmanaged interfaces if the DHCP server is is the router) for each VLAN as a bridge connection to each SSID (what you call wifi).

OpenWRT can’t connect VLAN directly to SSID and radios, or at least not easily connect them to each other and make it work. You need interfaces to connect them together.

Can you give me more details on this? I currently have a WWAN (for SSID My_wifi_1) and WWAN2 (for SSID My_wifi_2) interface as well as one (!) LAN interface. The issue I currently have is that I don't understand how traffic from the LAN interface flows the WWAN and therefore don't know what to do next after creating 2 VLANs (not done yet, but I know how to create them - just not how traffic from them comes to the WWAN and WWAN2) 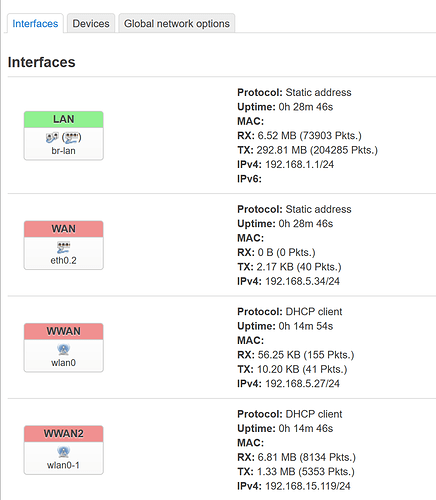 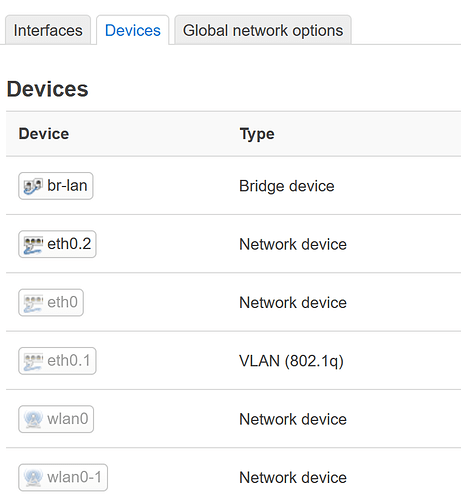 Are your wifi supposed to be connected to internet or serve a LAN network?

But on the internal LAN network you can pretty freely connect many VLAN to as many SSID through interfaces per radio.

That is not correct. The name does not matter when deciding which firewall zone an interface ends up in.

Interfaces follow the firewall zone, which gets its color from the hashed zone name. (It looks first like randomized, but as the random function is seeded with name-based hash, it is not actually random, I think. lan and wan have pre-defined colors.) So, there is no actual config setting of the color for each zone.

Anyway, as his picture tells he has them all in the predefined internet wan red zone.

He has either done that manually or the system puts the wan interfaces there in wan zone.

As I have understood running the data through the firewall is not the function he wants?

thank you all for your replies and amazing support here! I finally went with the idea of @alefello which worked out to be easy to setup and needs no different subnets for the vlan and wifi network.

here are my rough notes for one vlan/wifi, do the second one just the same way:

Wireless networks -> Scan, then join
Firewall-zone unspecified
Save, in wifi settings change from client to client (wds)
Don't assign an interface for now
In Network - Switch create the VLAN
Network - Interfaces - Devices create a bridge with just the created VLAN (due to limitations bridging VLAN directly with Wifi / required from OpenWrt 21.02 or so)
Network - Interfaces add new Interface with protocol unmanaged (DHCP in my case coming from a another device) and as device select the just created vlan bridge.
Go to network - wireless, edit the wifi client and as network choose the just created interface instead of the automatically generated wwan interface. (if you don't see your new interface in the list, don't forget to scroll up/down!)
disable the firewall as we don't need it (System - Startup)
test it

btw I could run two WDS clients in parallel / connect to two wifis (didn't test with more than two).