For anyone who is interested, VLAN support on the MX65 is now working correctly across all 12 ports and can be configured using the recently added config bridge-vlan section (PR). This can be done in the network->interfaces section

Edit: I had previously posted incorrect information about how to set up the bridge that would not survive reboots. This version is correct.

luci is currently a bit flaky so check at each stage the settings are being added to "unsaved settings". You may encounter settings disappearing on the "Bridge VLAN filtering" tab if you return to it, or after adding the vlan there is no software vlan interface available in the interfaces list. If this happens then refresh the browser and they should appear. Also if you make a mistake and lock yourself out, the settings should be reversed after 90 seconds.

Attached here is the image I am using for the MX65 which has various applications installed. You can use this for the usb image. This is still all for testing only and subject to change. Of particular interest is bridging and use of VLANs over all three switches (wan1-2,lan3-7,lan8-12) and trunks attached to the lan ports(lan3-10).

Thanks for your effort! successfully built and flashed my MX65 yesterday! now on to figuring out what Openwrt can do

Only one problem, when I try to install other modules it complains and says that the build is different. Is that only going to get solved when the code is merged in the main repo? For now I should be alright, but if in the future will need to add modules - the whole recompilation process is long and tedious, would be nice to add those in the interface

Only one problem, when I try to install other modules it complains and says that the build is different. Is that only going to get solved when the code is merged in the main repo?

For now you'll have to select the modules you need in the menuconfig. There is still some work needed at platform level before this can be merged.

Hi again I'm still having issues with my MX64 and can't boot into telnet has there been any update or has anyone found a solution. and can someone show me how to connect serial to the mx64 on stock firmware because I can't get it to work.

Can this be used as an overpowered switch or is it currently missing functionality for that use case? Is the 2.5G SGMII interface addressable?

Can this be used as an overpowered switch

Is the 2.5G SGMII interface addressable

The SGMII interface is brought up by the modified u-boot. Just to note, the QCA switches are only 1G. I wasn't able to get > 1G between the b53 switch and bgmac.

The SGMII interface is brought up by the modified u-boot. Just to note, the QCA switches are only 1G. I wasn't able to get > 1G between the b53 switch and bgmac.

Can you bond two to get 2G either the classic physical way or in software since their are two switches that support 7 ports each?

Hi, thank you for sharing this. I successfully flashed a MX64w. Is there a possiblity to get WIFI to work?

Unfortunately not possible with OpenWrt.

Broadcom wireless People often wonder why DD-WRT supports stuff that OpenWrt doesn't. It is often as easy as that: access to drivers. * Broadcom has not released any FOSS drivers. Broadcom doesn’t support open-source much at all. * DD-WRT has a...

Does anyone use the mx65 strictly as a switch with bonded WAN ports to a secondary router, using the PoE ports for APs, and have the config?

This isn't really supportable currently since all other links (the QCA switch ports) will first be passed via the CPU port, which is 1G, for processing. I have looked at alternatives like bonding two links with one attached to each qca switch, but it is somewhat fiddly to set up and I'm not sure it can work anyway. I do have bonding configured off two ports but limited to 1G. I also had issues with luci-app-bonding and the bridge config.

For setting up a switch you can follow this post or I can send you a basic config. For PoE there is no config needed.

BTW were you able to get the MR42 running?

BTW were you able to get the MR42 running?

No. I was not able to. I will probably try again this week or weekend at some point.

This isn't really supportable currently since all other links (the QCA switch ports) will first be passed via the CPU port, which is 1G, for processing.

So the WAN ports aren't actually 2x 1G then? So the only plus is failover scenarios?

It looks like the mx64 does the other scenario you're talking about in an officially supported way.

Can the mx64 route to two ISPs over two interfaces? I'd like to set up redundancy or even load balancing on my mx64, but I'm not sure if it can do this.   One interface is listed as "Internet" --are the others dual-purpose?

I also saw that the 65 may be able to be reverse PoE powered but not sure if it works on OpenWRT. 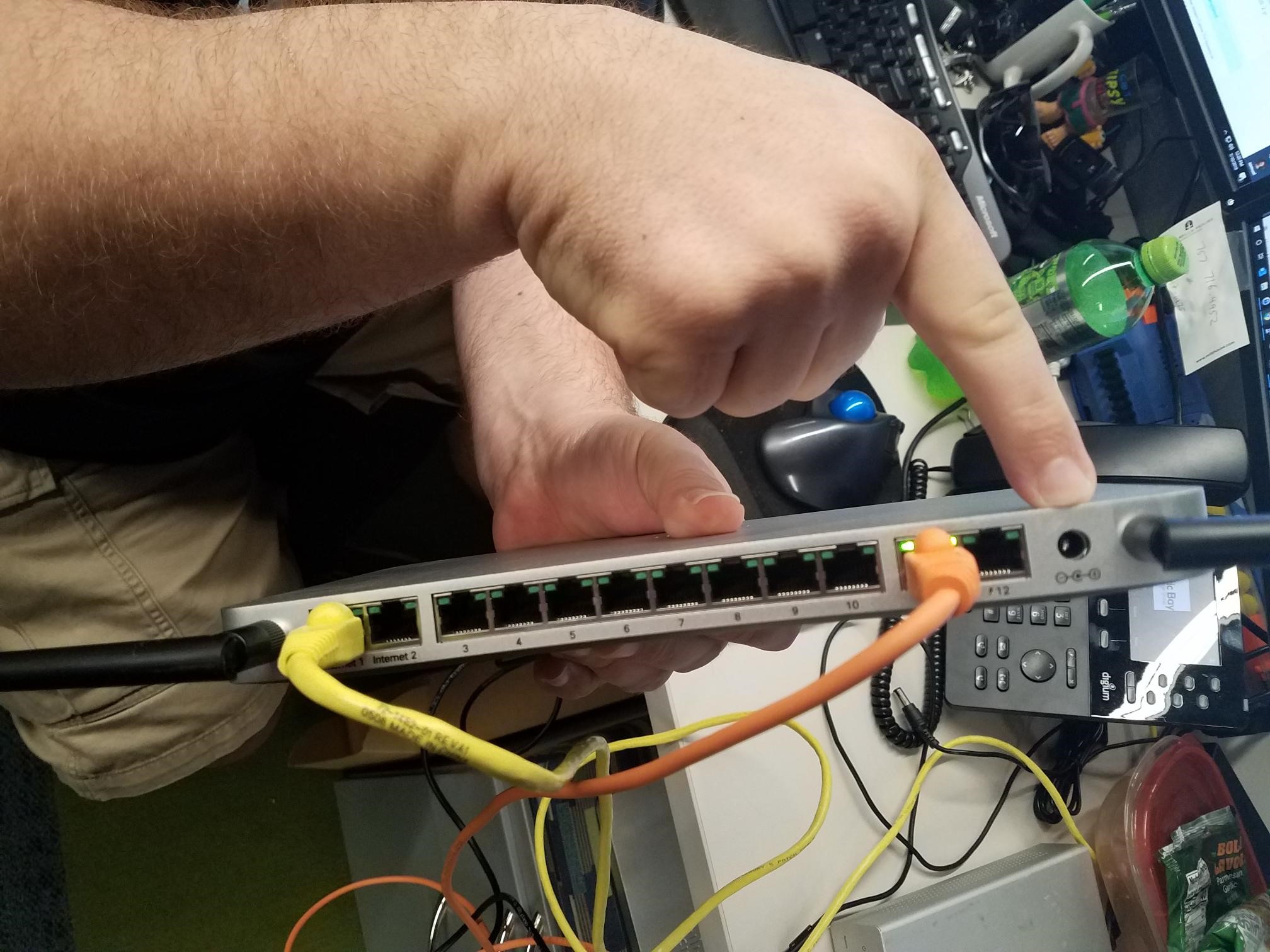 So  found out something very random this morning: a number of our MX devices were able to be powered via PoE from our Meraki Switch.   When plugged into the PoE port (11/12) on the MX device from the PoE on the switch, the MX powered on. We...

It looks like the mx64 does the other scenario you're talking about in an officially supported way.

You could use mwan3 to achieve much/all of what is mentioned. Just getting speeds >1G is the difficult part.

I also saw that the 65 may be able to be reverse PoE powered but not sure if it works on OpenWRT.

Yes Openwrt doesn't change this functionality, but not all PoE supplies are able to work (eg an MX65 can't power another MX65, but an MX68 can power an MX65). When it does work, the other port can also be used to power a third device.

Could someone help me with getting my MX64 into diagnostics mode? Holding down the reset button has not resulted in a white flashing light. The only color it has changed to has been purple, and that goes away after releasing the button.

Can you attach a serial cable and check the output? I've not seen that one before.

I'll have to get an adapter. I don't have one available.

Hi All, having some troubles flashing my MX64 and wondering if anyone can help.

After running the commands, I pull the plug, insert the USB stick and hold the reset button while plugging the power back in and after a few seconds I get an alternating orange and white LED and release. After about 30 seconds I get the rainbow LED and I cant ping the router on 192.168.1.1 so I am not able to SCP or SSH in to complete the next steps.

After that if I unplug everything, I am able to boot back in to diag mode or do a factory reset but doesn't look like its booting off the USB stick at any point.

I have a USB to RS232 adapter on its way in case I need it, but does anyone have any tips I could try?

EDIT: Have found that after rebooting it reverts back to my previous IP of 192.168.0.1 and displays the default meraki page too.

Is the file name exactly openwrt-bcm5862x-generic-meraki_mx64a0-initramfs-kernel.bin? Did you check the SHA of the USB image matches the compiled one? And does the USB have an LED to indicate activity, ie that the file is being read?

Thanks for that, filename is correct and SHA matches between build file and file on USB stick. Stick does have a status LED that does flash a little when its booting.

Just wondering, when holding the reset button on power up, I get alternating white/orange LED's as soon as power is up and release? If I continue to hold it goes back in to diag mode. If I release after the first, the USB indicator light flashed a little and then after about a minute or so it will go to rainbow LED. The router is not connected to the internet at all also, plugged direct from a laptop to port 1 on the switch, nothing on the WAN port.

Yes, just release when you see that first alternating pattern. It's just an indicator that an attempt will be made to boot from USB. In your case it's then failed and then reverted to boot the stock kernel, hence keeping reset held at this point goes back to the diagnostic OS.

Do you have another USB stick to try with? Also are you using a DOS partition table and not GPT?