I'm using layer cake SQM with diffserv4 and I think I've figured out how to apply appropriate DSCP tags using custom firewall rules. I can see that traffic is getting classified and placed in the four available tins (by looking at the output from tc -s qdisc), so it is definitely working to some degree:

I've recently migrated from Tomato, which has an excellent interface for checking QOS rules - you get a live list of connections which includes the QOS classification for each one. It also tells you which specific rule resulted in that classification. This makes it easy to spot rules that need tweaking. I'm hoping there's a way to achieve something similar in OpenWRT?

Are the DSCP tags being forwarded to the internet or just locally over the LAN?

If they are generated only for local use, you could verify them by performing a packet capture on the switch/router using tcpdump and view the data using wireshark. The WAN part is a bit tricky as you need to make sure the receiving machine allows incoming DSCP tags and that machine would have to do a packet capture on ingress traffic as well. Your ISP and any other firewall over the internet may strip the tags regardless.

I'm applying my own DSCP tags on the router itself using firewall rules which match against ports, mac addresses etc. I suspect these are being forwarded to the WAN but I don't expect anyone else to honour them - they're only there to get the connections into the correct tin in my WAN SQM instance.

I was hoping for an simpler method than trawling through Wireshark traces, but if that's what I have to do I'll dive in. I think I've been spoiled by working with Tomato's GUI for many years

The DSCP lives on the individual packet/s, not on the connection, so there's nothing connection related to track.

If the DSCP were also stored in say the connection tracking connmark then it could be used to infer the DSCP value for that connection, but that's no guarantee that each packet actually had it applied.

If you're feeling 'brave', then openwrt has some specials in the form of iptables connmark -setdscp and (from upstream linux) tc act_ctinfo. They can be used in combination to store DSCPs from packets into connmarks and restore from connmarks into packet DSCPs.

Ok, I think I've come up with a solution. In my custom firewall rules I do the following:

This ensures that all packets, both inbound and outbound, are classified correctly for connections marked by the rules in part 1.

I also now have a script which parses /proc/net/nf_conntrack into an easily readable table containing src/dst IPs and ports, bytes in/out, and the mark on the connection. I can run this whenever I like to check whether connections are being classified correctly.

openwrt has some specials in the form of iptables connmark -setdscp

Is there any doc anywhere for connmark -setdscp? I couldn't find any...

Here's an example of what I'm doing right now. It seems to work but I'm not sure it's the best way:

Wow im working on the same thing more or less lots of fun...

Ahh, I forgot It's in master only, happening some time after the branch to 19.07.

Firstly, apologies if I'm covering well-worn ground here. I've only just started digging into this within the last few days.

Looking at my SQM stats, my approach isn't working properly for ingress (interestingly some packets are being classified into different tins, but definitely not all of them). So I switched to the PREROUTING chain for tagging the packets based on the connmark:

The packets and connections are definitely tagged correctly, but this still doesn't work for ingress. After some reading on the forum and elsewhere it seems that this is because ingress traffic is subject to SQM before it even goes through the PREROUTING chain. Now I understand that this is the problem @ldir is tackling in his patches 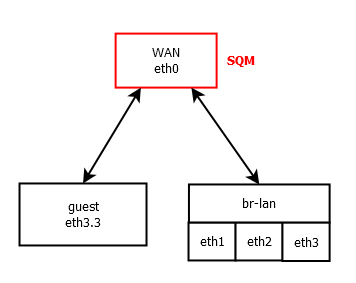 While we wait for @ldir's patches to land in a release (I don't want to get into manually patching), the only solution I've found in the forums is to set up a veth pair between br-lan and eth0, and enable SQM on veth0 instead of eth0, so that iptables gets a look-in first when the packets arrive on eth0: 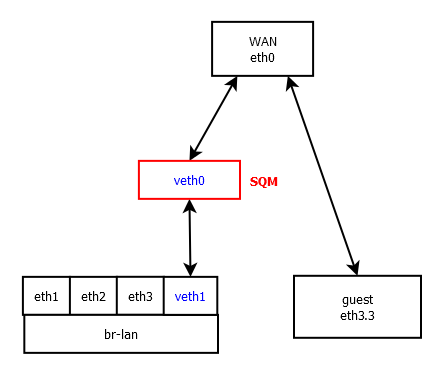 However, I also have a guest VLAN, so I think I'd have to create two veth pairs and two SQM instances, like this: 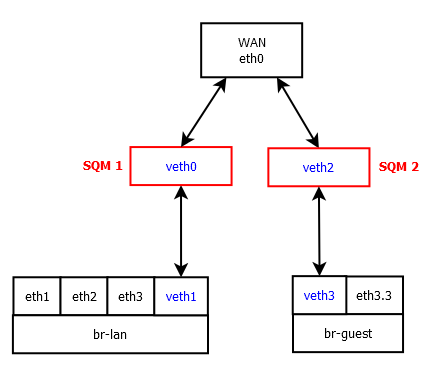 This is all starting to look a bit messy! I don't see how things could behave properly with two independent SQM instances, and presumably any traffic from the router itself (e.g. DNS traffic from dnsmasq) would not be subject to shaping under this model, so I wouldn't be able to prioritise it?

Would it not be better to set up a veth pair with veth1 bridged with eth0, enable SQM on veth0 and use veth0 as the WAN interface, like this: 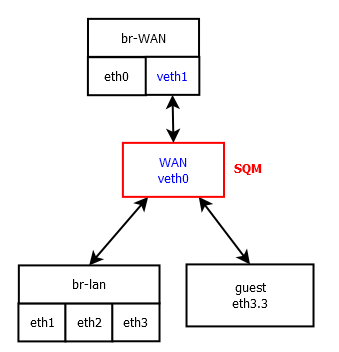 This would allow me to shape br-lan and the guest network with one SQM instance, and it would also catch traffic from the router itself.

So is this approach even possible? Is anyone currently doing anything like this?

I will just add that my network seems to be working very well even though SQM isn't classifying packets correctly on ingress. Prioritisation of outbound traffic appears to be sufficient for my household's usage. It's just bugging me that the ingress side isn't working properly

I will just add that my network seems to be working very well even though SQM isn't classifying packets correctly on ingress.

Wellcome to the club

After years of accepting the common wisdom that QoS means having to twiddle with arcane IP/port/protocol rules, it is rather striking how well in general a competent AQM like fq_codel or cake works without lots of special cases

I do note that both fq_codel and cake (by default) use a flow-separation and a competent AQM to keep different traffic sources out of each other's way, and both employ a rather simple (at least in retrospect) heuristic of giving flows that have no packets queued a slight priority boost. That for many cases isa sufficient to not wanting to deal anymore with port-port/per-IP rules anymore

(Sure, that does not work for everybody, but for quite a lot of users that is simply good enough to not bother).
I tend to recommend cake with a per-internal-IP-fairness configuration (see the Making cake sing and dance, on a tight rope without a safety net (aka advanced features) section for details) to isolate games and streamers from each other

After all that I think I've found a solution that works:

Does this seem sensible?