I have the following configuration:

What I want, is that Openwrt bridges the internet connection, in other words, that the Edgerouter on the other end gets the public internet IP.

So, what's wrong with the configuration??? I thought that if I disable the DHCP server, OpenWRT would bridge the internet connection. But it's not.

What have I done wrong?

Make a new network bridge with proto unmanaged. The modem will only issue one public IP, so you don't want OpenWrt to take it. The unmanaged bridge does not have an IP address. It will pass the Edgerouter's DHCP request through to the modem.

If OpenWrt needs to access the Internet it has to do it the same as everyone else, NAT through the Edgerouter and then to the modem.

As an advanced topic, you could use VLANs at both ends to link WAN in and LAN out with one port and cable.

Thank you for your help

It still doesn't work. Is this configuration right? 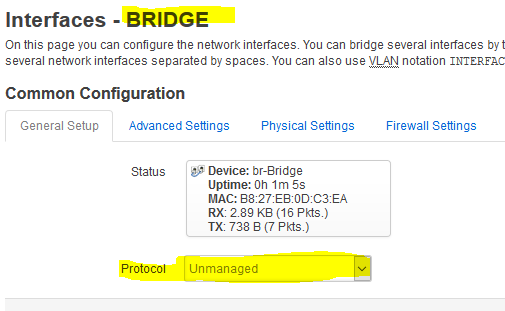 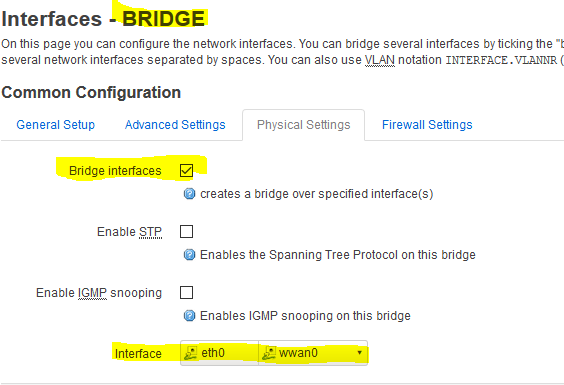 Wan1 (wwan0) from the LTE modem 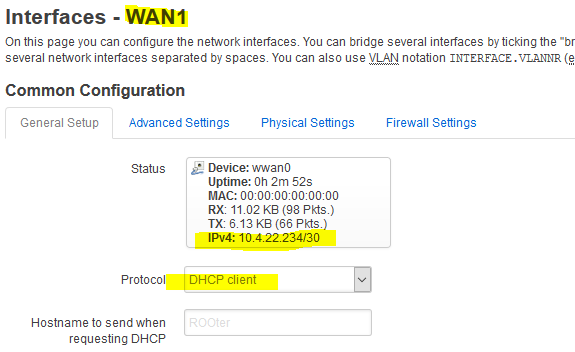 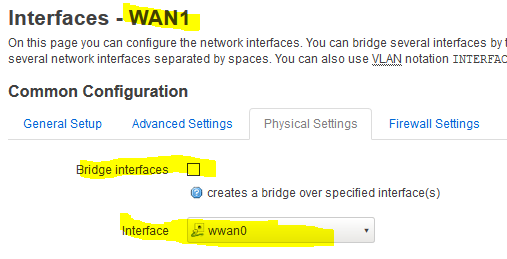 No IP on my Edgerouter:

The modem and eth port must be only in that bridge. Then the other router will use it as its WAN. The Pi cannot be directly connected to the Internet, when you get to that point in the setup, it has to loop through the other router.

By convention, use only lowercase in interface names. (Luci shows them in all caps, which is confusing.)

The modem and eth port must be only in that bridge.

Isn't it the case (according to the screenshots)??? 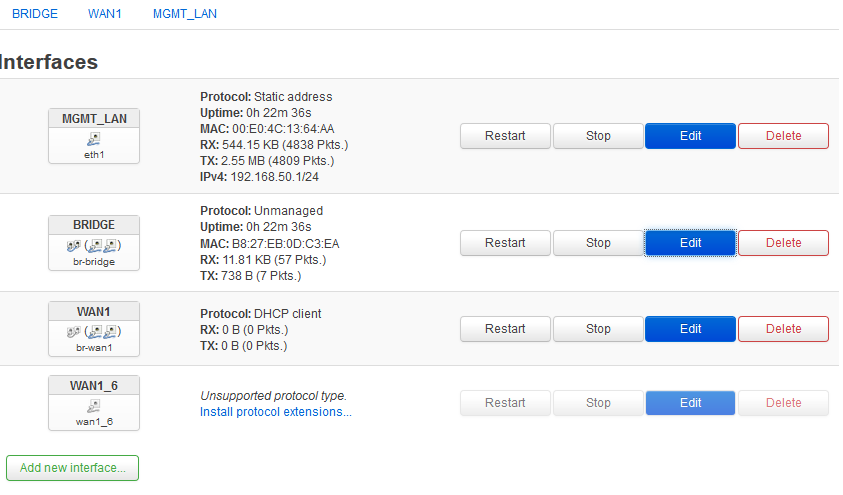 Should I add firewall rules???

EDIT:
Can't I setup a rule somewhere that would only allow a specific MAC address to ask for/receive the internet IP?

When I bridge eth0 and wwan0, s

This usually won't work. The wwan0 interface is not an ethernet interface, even if it might appear like one in some cases. That's an illusion created by the modem firmware and/or driver. But the illusion is not perfect and does not necessarily support clients with a mac address different from the fake wwan0 one.

You are better off with a half-bridge. Maybe relayd will work? See https://openwrt.org/docs/guide-user/network/wifi/relay_configuration

Or you can create something similar using routing rules, proxy-arp and a local dhcp server on the Pi.

The wwan0 interface is not an ethernet interface, even if it might appear like one in some cases.

Is that because wwan0 is created using a usb interface? How about minipcie based modem?

@Tantalum, I am trying to do the same and found this.

Is that because wwan0 is created using a usb interface? How about minipcie based modem?

Is that because wwan0 is created using a usb interface?

No, it's because the mobile network connection is on layer 3. If you want to see it as a layer 2 interface, then you have ot fake that. Which is what many modems and/or drivers do.

you can create something similar using routing rules, proxy-arp and a local dhcp server on the Pi.

Can you elaborate more on this please? Are you talking about setting a static route between PI and downstream router and why is a dhcp required on PI?

Can you elaborate more on this please? Are you talking about setting a static route between PI and downstream router and why is a dhcp required on PI?

You need more than just a route. You need default routing in both directions, which means that you need rules based on ingress interface.

DHCP is of course optional. But it makes the setup more convenient by automatically forwarding the IP configuration from the modem to the client. This assumes that you create the necessary modem connection scripts to make a DHCP configuration every time the modem changes its address

You need more than just a route. You need default routing in both directions, which means that you need rules based on ingress interface.

Thanks. Will this setup cause double NAT for the clients behind the downstream router?

Or you can create something similar using routing rules, proxy-arp and a local dhcp server on the Pi.

I tried this on OpenWrt but was not able to get it to work. My config below. Any advice?

Result: When I hook up a client device no DHCP is given to the client because the modem has already taken it - I get an error "this IP is already being used by another device".

I don't know how to configure it using uci, but setting up something similar to this should work (I just tried tried it right now):

Note that you obviously should have saner firewall rules. And that this is missing the dhcp server config. Which really should be trivial, except that there doesn't seem to be a way to use dnsmasq for this since it makes too many assumptions. And you can of course don't have to configure vlan 9 for your inside interface. That was just for my test. The inside interface could be anything. But it will only support one IPv4 client.

I'm close, but the client device (Mac computer in this case) cannot access the Internet. 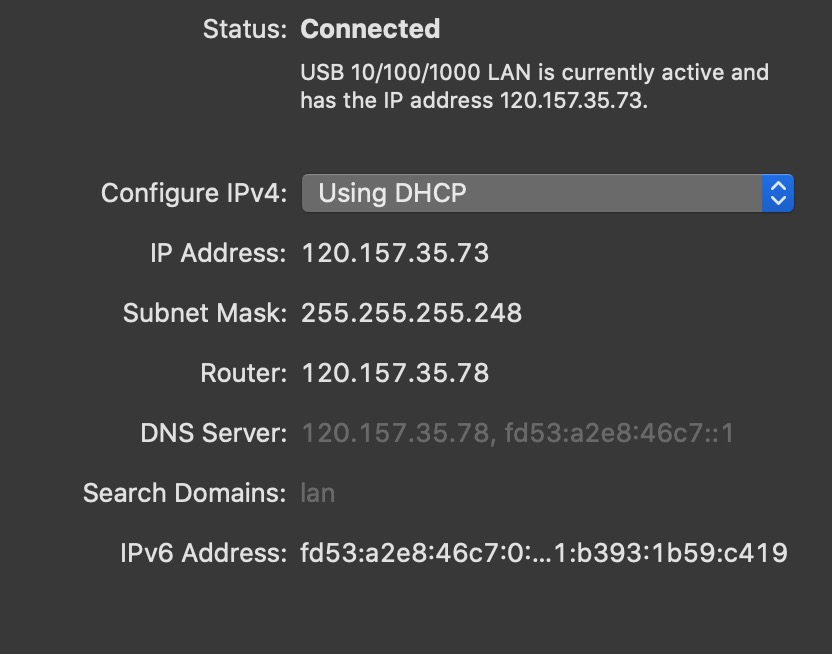 I wanted to ask if someone managed to make the bridge mode work with a LTE modem?

I read that some people made it work using modemmanager:
https://s4gru.com/forums/topic/7844-build-your-own-devices-routers-relays-iot-etc/page/2/?tab=comments#comment-536006

But I getting an error message:

I also found a solution on a German forum from someone who actually modified dnsmaq (actually dhcp.c file), in order to make the bridge work (I don't really know how).

+ the additional delay is none. My Modem will actually route the packets, but in a odd way ofjust forwarding all packets with 2 routing tables. My Router does no switching ;-)

But I couldn't make it work either :-/

Is there really no easy solution?

It seems that one of the solutions mentioned was authored by @Westrem
I'll be interested to test his build if the project is still alive.

Why doesn't adding the modemmanager-controlled wwan0 into the br-lan bridge work?

I see. So if I understand your idea from earlier, and please correct me if I am wrong, the strategy to get this "pseudo bridging" to work is to create a new bridge which will be able to address non-local hosts (I presume because it will be using the regular Linux networking driver then it is capable of doing proxy_arp), and that this new bridge interface will have the route to the network held by the wwan0 interface.

I am trying to do it just using eth1 for simplification in a proof of concept. I set a default route via wwan0 (which appears to be connected according to ModemManager). but I am unable to get any packets out to any non-local network at all, so I am feeling very confused at the moment.