Wrt3200acm all ethernet activity lights on even though nothing plugged in

My wan and switch ports recently died on my wrt3200acm tried reflashing and nothing any ideas on where to look or is it toast?

lights are constant on even with no devices connected WAN port is useless switch port 1 and 2 are useless however i can get a connection on port 5 but not with open wrt only official firmware.

attached image shows what its doing, i've opened it up doesnt look like any damage to the board no popped caps or burns. 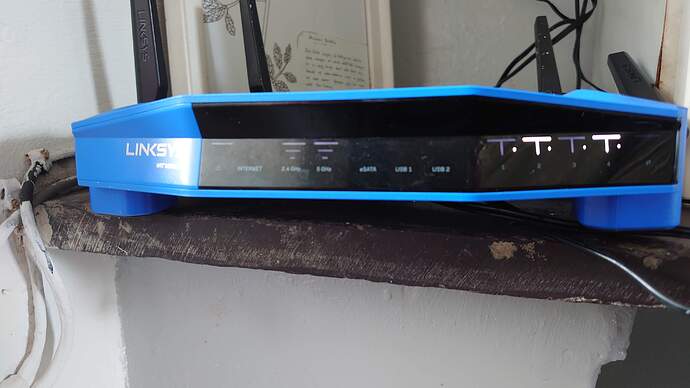 Found the problem looking through a magnifying glass c249 has a crack across it does anyone have a schematic and know the value of the solid state cap.

R228 also looks damaged and has a resistance of 35.9kohm

I'm guessing surge across wan and LAN ports 1,2 hopefully the hn1878cg is in tact but at least ports 3 and 4 are fine

Even if I can't save it I should still be able to configure those ports in openwrt if I can ever get in! 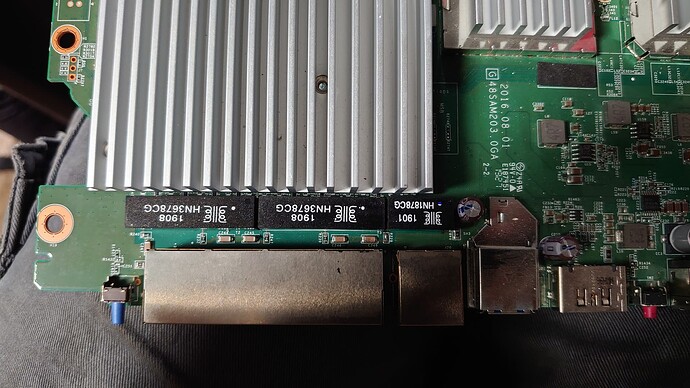 c249 has a crack across it does anyone have a schematic and know the value of the solid state cap. 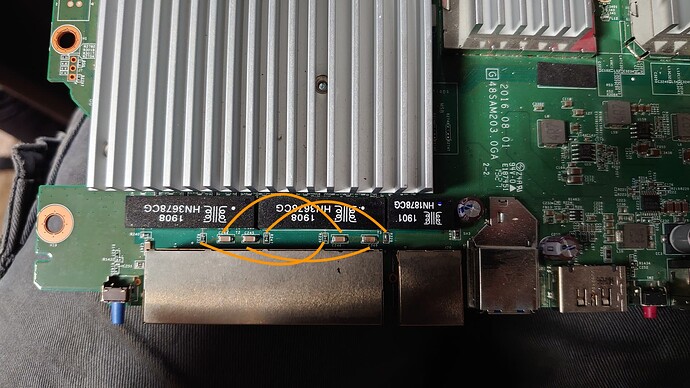 Thanks for the reply
I dont want to remove the working side of the circuit in case i cause more damage, and unfortunately i dont have an lcr meter. I cant tell what the capacitance should be on the good ceramic capacitor. the resistor is fairly easy, i've sorted that now it was 75ohm we my replacement i found on an old graphics card it now shows 73ohm instead of 35K but guessing its +-5% tolerance.

I just thought as these devices are open there might be schematics floating around.

It's been hit by lightning or other excessive voltage. The link lights coming on with no cable connected means that the PHY chip itself is damaged. The resistor and the capacitor are for common mode isolation -- they are not in the signal path so replacing them won't help.

You can probably log in by serial to see which if any ports still work.

yes that is my plan to use serial coms to configure them with openwrt. but thankyou for letting me know replacing the cracked cap will be a waste of time.

guess it might have to become a wireless repeater

First I wouldn’t sleep well with a over voltage damaged device connected. I would see this device as scrap before something starts to burn big time.

Lightning doesn’t really discriminate what it destroys. It just destroys for fun.

Usually over voltage protection protects against voltage spikes made on the grid like transformers being switched and normal voltage variations.

so after playing with it I can get it to work with the official firmware by linksys but not the WAN port or port 1 on the switch obviously but the whole switch wont work at all in openwrt 19 or 21. (using default configs)

in openwrt 19 I disabled dhcp and removed the WAN from the bridge this guide https://openwrt.org/docs/guide-user/network/wifi/dumbap

I've tried setting up individual ports also but doesnt matter what i do with my configs the kernel log doesnt show any activity on them
(dmesg) for link status being down, then up

whats the official firmware doing differently that allows the switch to work. the switch can give IP or be used without the dhcp server and pass the dhcp through to wireless.

open wrt doesnt even detect the active ports entering and leaving promiscuous mode when pugging a connection in and disconnecting when in the bridge.

any suggested config tweaks to get the switch functioning

i'm currently doing things in openwrt via serial as its so much easier, but wifi works fine no problem in openwrt.

It would be nice to be able to continue using it as a bridge and wireless and have my replacement wrt3200 handling dhcp and pppoe.

You can configure stock firmware to be a dumb AP.

yes I can use the official firmware but not openwrt for some reason. but i dont want to use the stock firmware i'd rather make the most of the processing power of this device, I could host open VPN on the this device rather than the main router now and a whole host of other stuff but i need the switch working

Has anyone got the values for the three electrolytic capacitors on the board? (Two through-hole, one surface mount)