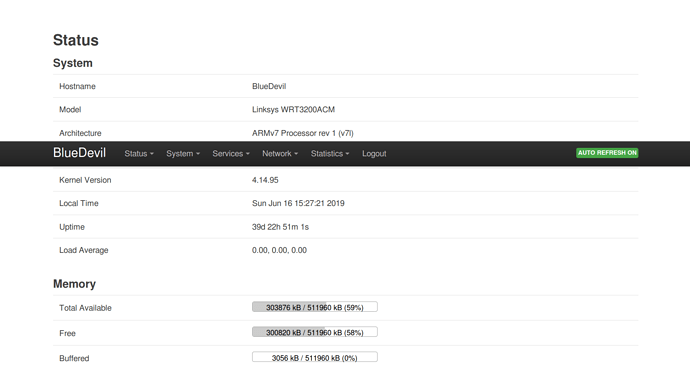 Uptime is getting up there...

Same, I had 32 days on my wrt1200 recently until a power outage stopped that run.

The WRT3200 runs rock stable here as well. Can't remember the last crash or random reboot. My last uptime was around 100 days, then I had to reboot for an update.

@Ansuel: I don't know what your wifi problem is, but I don't have any issues. Maybe you want to start a new thread which provides more info why you think your wifi isn't working that great.

@Ansuel
2.4G might be a bit dodgy but 5Ghz runs great for me aswell

Well the range is pretty low... No mimo support and also the driver is abandoned ... Pretty bad IMHO

Mine is running since mid march around 90 days.
Usual update the firmware every 3-4 month. This is kernel 4.14.102. I can't wait for 4.19 to be included in the trunk, I can't complaint about the wifi. Is is up for the same amount of time. That the driver has been abandoned is unfortunately.

I do not want to start a war here, but is there any other router supported by OpenWrt that can do MIMO?

nono i'm not saying it's sh* t because of mimo... i'm saying it's sh*t because of
Also power and reg management is also bad... the driver just have some specific problems that won't be solved... cause marvell decided that the driver is """good""" (i'm quoting words from the github mwlwifi repo). I mean if you don't want to support it... jusr release the code to someone else like for ath-ct

I think that not being able to adjust the power level on mwlwifi is pretty special.

is there any other router supported by OpenWrt that can do MIMO?

First off, MIMO != MU-MIMO, almost all routers with multiple antennas are MIMO
And according to kernel.org , ath10k supports MU-MIMO https://wireless.wiki.kernel.org/en/users/drivers/ath10k/configuration#mu-mimo_configuration

the wifi of the wrt series is too much limited

Is not that a Turris Omnia?

for the price of a turris omnia you can go directly with x86, but still yes it's good that you can use your own wireless card

True, but then you need to spend some money on a good AP. All-in-one solution is something a lot of people like for the sake of managing fewer network elements.