i have Linksys WRT3200ACM on latest OpenWRT. I just bought printer Brother DCP-T425W. While pinging printer directly from router's CLI i get like 250ms latency. Printer connects to 2.4GHz, i have tried 20MHz width, legacy mode, all available channels, resetting printer to defaults and setting it up again, different transmit powers etc. It looks like this: 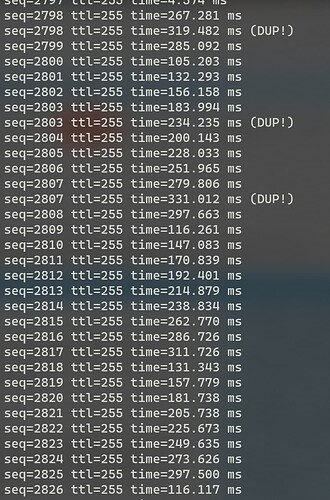 I have tried that printer on my old router which is on MediaTek chipset. Printer there behaves normally, ping is like 4ms.

I also tried Direct Wi-Fi, i have like 1-2ms then.

Printer is in the same room as router 2-3 meters away.

Is there anyone who can advise how to resolve the problem?

Does the printer have any obvious issues with respect to the core functions (printing, scanning, anything else it needs to do over the network)?

If no issues are observed, you can almost certainly ignore the ping latency. The printer may simply be putting the radio into low power or periodic sleep modes when the printer is idle. It will wake up sufficiently frequently to be reachable by other hosts that may want to print or otherwise connect to the printer, but sit in a lower power mode most of the time and thus be slow at ping responses (relatively speaking - you’re still talking about <0.5 seconds)

As i said, i have tested pritner on different OpenWRT router and ping there is around 4ms all the time. I definitely can feel the difference between using printer with old and current router especially while scanning in high resolutions.

Anyone have any clues what I may try?

Most cheap consumer printers are more or less "you get what you pay for" and the 2.4Ghz on the WRT1900*/W3200-series isn't great so I'd guess that you have to live with it, start replacing hardware or use a cable.

The printer seems to be OK as I wrote before it is working fine with another OpenWRT router. I have older Brother printer which barely prints connected to the same router and it has like 1-4ms latency.

Is there anything I can try to check?

Does the high ping affect the printing in any way?

After some test i have discovered that printer from time to time does not respond for like 5 second. While trying to print at that time i takes blank page, waits for couple of seconds and just spit blank page.

The biggest issue is with scanning in 1200dpi. On my old router passing picutre which can be around 70MB takes seconds, on WRT3200ACM it takes minutes for every page.

Printers often have very 'special' embedded wireless solutions, which are often quite buggy on their own - combine that with a router using a (mwlwifi) chipset that's known for interoperability issues and other bugs and you have a match made in heaven…
Given that Marvell/ NXP have abandoned their users, there is very little to do, aside from looking for a different AP.

Guys, I was playing with beacon interval parameter.

When beacon interval is set to the lowest value which is 15, printer responds in 2-6ms.

No other value in beacon interval seems to do the job...

As I don't want to drain batteries of devices connected to 2.4GHz please tell me if my thinking is correct.

I was playing with beacon interval parameter

I don't want to drain batteries of devices connected What is Beacon Interval and What Should I Set it to? - Home Network Admin

When your internet speeds drop, there are a few common troubleshooting steps that you take, such as resetting or unplugging your router, changing configurations on your laptop, or even contacting your ISP. There is one step in optimizing that is...

Have you noticed that the battery life of your device isn’t what it used to be? Sure, over time your battery will discharge faster and will eventually need to be replaced, but before you pull out your wallet to purchase a pricey new battery for your...

I don't know if this helps but DDWRT has some pretty good articles about Beacon Interval and DTIM that you should check out.

Again, this is for DDWRT but it will give you a general idea about what to tweak.

Why it does high pings with 1 router and not another I do not know, but I do know that every Brother printer I have owned does this. I have an edjucated guess that it's a low power mode the printer uses. If you set the beacon interval so small that it may not have enough time to enter low power mode. I have no proof of this, it's only a guess.
As a test, try continously pinging the printer's ip address in the background while you pull up some random document and print it in the foreground. Would be interesting to see the results. If you really think about it the ping time of the printer at idle does not matter. what matters is the latency under load.

BTW I have a Ring doorbell and camera which also do the funny ping thing. Also my 4 wireless Arlo cameras do this too.

thanks for all the links. After reading them all I got to conclusion that mu understanding of

"As I don't want to drain batteries of devices connected to 2.4GHz please tell me if my thinking is correct.

is correct. Can someone just confirm?

Later I will do some ping test under data transfer to printer which ' MakeWiFiGreatAgain' mentioned.

As a test, attempt continously pinging the printer's ip address behind the scenes while you pull up some irregular record and print it in the closer view. Would be fascinating to see the outcomes. Looking at the situation objectively the ping season of the printer out of gear doesn't make any difference. what makes a difference is the inertness under load.