Sorry, I couldnt help you, hope somebody of the Freaks here can help you

I will try ask this question in the VPN PBR Forum. This really seems to be the right way. Thanks for the hint!

My post did not get any responses in the VPN PBR forum. Are there reasons, why people get ignored in this forum? Did I miss something?

LOL, unless I missed something, you're not being ignored - you just haven't found a solution yet.

To do what you desire, you have to:

I saw this post the other day, I thought you would have realized that by now.

alright thank you! I am new to this forum and do not know yet, how things are going here.

You mention a VLAN. So what I found here, the whole setup is a firewall issue: https://www.linksysinfo.org/index.php?threads/simultaneous-openvpn-server-client.72103/

So if I get this right, my firewall do not like to route from one interface (WAN) to another (VPN). How could a VLAN fix this? And if yes, how would be the right way, all devices in one VLAN, and only the phone in another? Thank you for explanation.

So what I found here, the whole setup is a firewall issue:

I'm not sure about that link, it's not even on this site. Anyways. firewalls and routing are separate things.

How could a VLAN fix this?

You need to reconfigure your router to use 2 LANs:

You will configure your phone to be in the same Firewall Zone that the VPN VLAN/Interface uses. Therfore:

Great, this sounds possible! I will try to find out how to create a VLAN that uses the VPN client. Until now, I have never played around with virtual LAN zones. Firewall zone should be easy, adding the rules too. I will give feedback soon (or coming back with new questions

I will try to find out how to create a VLAN that uses the VPN client. 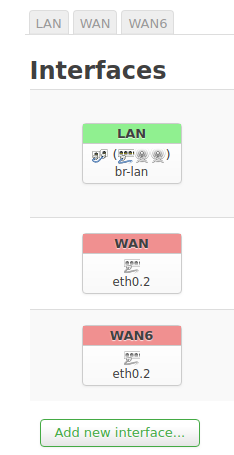 Hi, thank you, did as said, but I am stucked here and amybe missunderstood something. I thought I know what I am doing, but honestly I do not really get how these rules can work...

I have created an interface "lan2".
No I am having: LAN (Default), LAN2 (Static address, nothing changed, but physical adapter is WG_MV), WG0 ("Phone_VPN" with Wireguard), WG_MV(Mullvad Wireguard), WAN, WAN6 (Default). 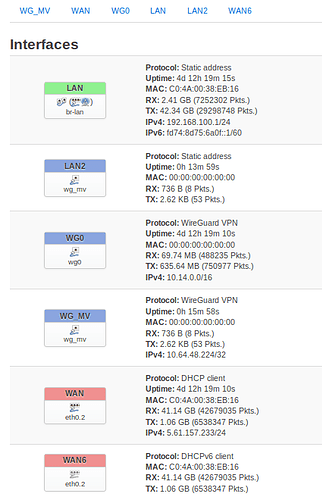 So now for the Firewall:
Until nowadays, I had lan and wan zone. VPN for the phone was in the LAND zone, Mullvad VPN in the WAN zone.
No I created a lan2 zone, containing lan2, wg0, wg_mv. 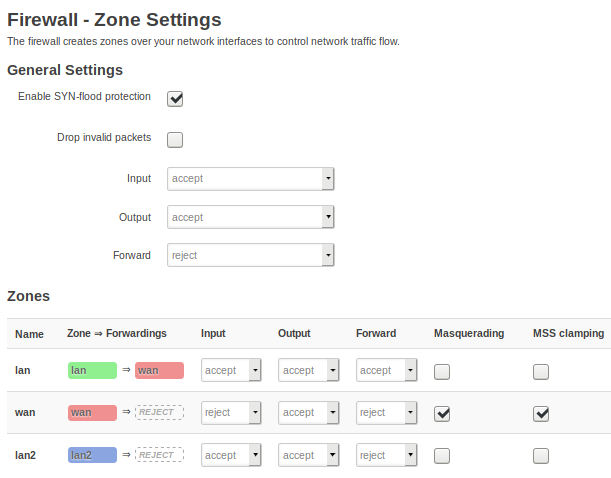 Correct until now? What now?
I added the IP rules under /etc/config/firewall and changed the interface names. 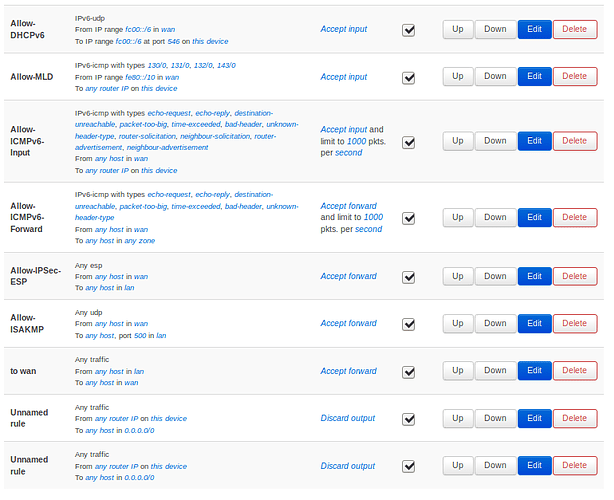 Until now I have not added anything to the VPN PBR rules.

At the moment I surf the web with all devices without Mullvad. Adding a rule (VPN PBR) to use Mullvad with my Laptop disables internet access for my laptop. Connection to my router via Wireguard from phone fails.

Alright. Sorry for being that newby... Never worked with VLANs before. Really appreciating your help! 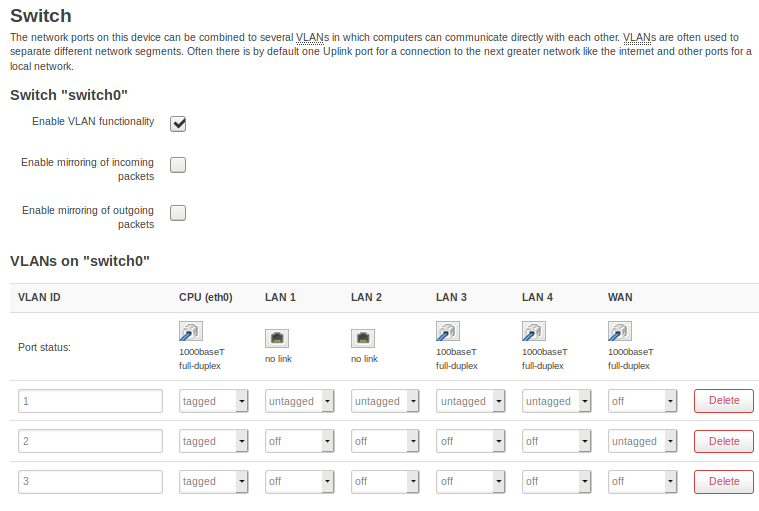 Interfaces seem to work fine, only LAN2 does not show RX packages.

Yes, but you haven't moved traffic over yet.

Changing all VLAN1 ports to VLAN3 should switch them.

Alright done. Looking the same now. Nevertheless nothing changed. It seems that still LAN is used instead of LAN2. What can go wrong here?

In addition: LAN2 is a bridged devices, but which elements should be included in the bridge? Am I right that the Mullvad interface should be included? Because otherwise my new VLAN would not be used for VPN right? Or is this only done via the rules?

If you use WiFi, you have to move it.

Am I right that the Mullvad interface should be included?

I see no separate firewall zone for the Mulivad VPN

It should be in its own firewall zone, so you can allow forwarding from LAN2 to VPN.

Or is this only done via the rules?

Switching WIFI did the trick. I got a new Ip from the new range, and LAN stopped sending packages, LAN2 became active. Unfortunately internet access stopped for everyone in the nework. Mullvad seems to work nevertheless (VPN PBR shows me valid IPs for all interfaces) and I also see packages in the interface view. So I think this is a routing rule issue.

In etc/config/firewall I added:

Here again a screenshot from the new firewall view. I added forwarding from LAN2 zone to Mullvad zone and accepted forwarding.

In etc/config/firewall I added:

These go in /etc/config/network !!!

(Apologies for not specifying this - they are routing rules, NOT firewall rules.)

Alright, thanks for correction! I will try tomorrow! Thank you a lot!

Holy sh*t!!! It works!!! Connecting over WLAN in my network:mullvad says it is connected Connecting via LTE: Mullvad say connected. Also can access my devices over LTE! Man, thank you so much!

There are two things I have to find out now: how to let some devices not use the tunnel (this already worked with VPN PBR plugin for me, but I am not sure if this can be combinated with your rules easily) and then I really need some time and maybe explanation, why this works.

See: in different forums (like in the one from my link) it's said the firewall don't like to route from WAN to VPN. So now all my devices are part of a new virtual LAN (eth0.3). Why this helps here? Also, my new firewall rules only say, that routing from LAN2 to VPN is fine, but why the routing from the VPN server Phone) works? Can you explain this to me in some simple words? Especially the routing rules. "Option in", and "dest" are clear, but what does "lookup" and "table"? I would really love to understand this and avoid asking noob questions next time.

I will also write down everything I did following your guide in a small structured text to allow others to found it and post my config files.

Here is what I did:

So what did I do:

1: add a Wireguard tunnel to your phone like described here. My interface name is wg0.


Rboot and figure out that the tunnel works. There are many differnt tutorial for that. Let's say read on when it works.

2: add a Wireguard interface for Mullvad following this guide:

Learn how to run WireGuard on a router.


Important: do not acctivate "Route Allowed IPs", ignore DNS stuff for the beginning. Coming to DNS leaks is something for later.
Interface name for me is wg_mv.

3: add a new VLAN (Network/Switch) by clicking on "Add". Set eth0 on tagged, rest off

Change interface names fitting to yours, when not using mine. "wg0" is the "phone tunnel" (server), "wg_mv" the one for mulvlad (client).

7: now switch traffic from eth0.1 to 0.3. You do this under Network/switch by setting all untagged port in eth0.1 to off, and all off port (besides WAN) on eth0.3 to untagged. Leave WAN as is in eth0.3 and also CPU.

8: now move your WIFI interfaces from lan to lan2.

9: reboot and check am.i.mullvad.net. It should show green (maybe not DNS) from phone and from LAN.

After all it should look like this (or similar): 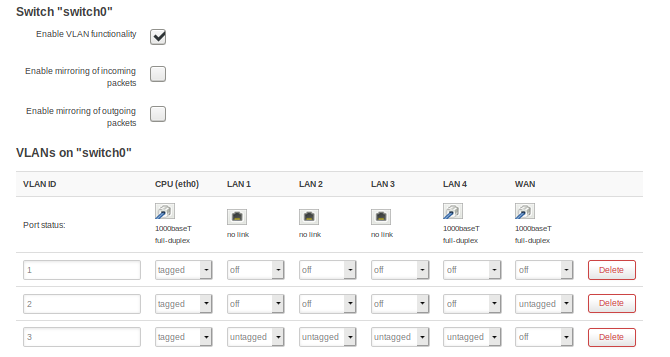 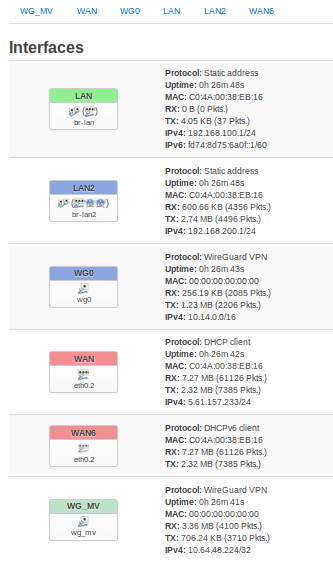 how to let some devices not use the tunnel

then I really need some time and maybe explanation, why this works.

in different forums (like in the one from my link) it's said the firewall don't like to route from WAN to VPN.

They're wrong then. And it's not WAN, it's a VPN interface to VPN.

Why this helps here?

Not sure what you're asking since I don't know what needed "help".

Can you explain this tome in some simple words?

but what does "lookup" and "table"?

Lookup and table refer to the routing table. The rules:

In computer networking a routing table, or routing information base (RIB), is a data table stored in a router or a networked computer that lists the routes to particular network destinations, and in some cases, metrics (distances) associated with those routes. The routing table contains information about the topology of the network immediately around it. The construction of routing tables is the primary goal of routing protocols. Static routes are entries made in a routing table by non-automatic ...