I am triying to setup a VPN using Wireguard and I am having some issues with Openwrt.
Some of them have been solved, but for other I need some guidance. I will describe my setup and solved issues in case that this helps sombedy. And I am asking for help to solve the remaining issue.

The following is my Layer 3 network setup: 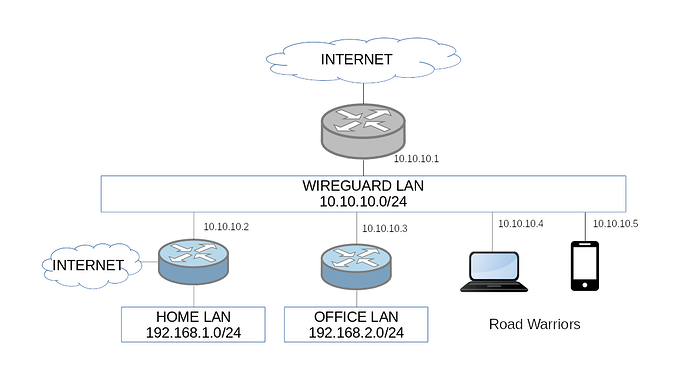 From a wireguard perspective, Client/Server roles are irrelevant, but I diferentiate both roles from a configuration perspective. In this configuration with road warriors, the Clients are the peers that will initiate the connection (handshake) with the Server peer and therefore the server needs to have an open ports to listen to incoming wireguard traffic. For enhacend security clients do not need to have any opened port as long as they initiate the handshake with the server.

The following is the wireguard config file on the Ubuntu server (/etc/wireguard/wg0.conf)

The first issue that I have noticed is Openwrt creates automatic routes, but they are incorrect routes. When a wireguard interface is added the following routes were automatically established in my home (and offce) router:

This automatic routing does not not work, because the "Server public IP" (or wireguard Endpoint) is routed via br-lan and packets to the Endpoint will never reach the public Internet. I have solved this routing issue deleting this route. for this I create a new file /etc/hotplug.d/iface/99-ifup-wg with the following contents

Basically it deletes the automatic route (via br-lan) and adds a route to the home office LAN via the wireguard interface. The gateway to the Inter-LAN is the Server IP address onf the wireguard interface. It also enables forwarding rules on the firewall and inites the handshake with the server using a small ping packet.
This ping turns out to be very important, because wireguard is a silent protocol and will not initiate a handshake unless one of the peers initiates the connection. After I rebooted my router I lost connectivity to the home router, because the server could not reach the client peer and all ports on the client are closed unless a packet is sent to the server. The ping solves this use case. In my design the Client is initiating the connection and the ping ensures that as soon as the interface is up, a handshake is forced and both peers communicate and the client endpoint is updated on the server. I also enabled the keepalive to monitor the interface periodically.

I am using vpn-policy-routing to enable the selective routing and it is working fine to connect to the internet (https://github.com/stangri/openwrt_packages/tree/master/vpn-policy-routing/files). I am browsing the internet from all home computers using the wgHome interface (VPN) and those hosts selected to bypass the VPN are routed accordingly.

Other fixed issues (for reference in case that anybody is facing them):

Now the unsolved issue: I can ping from the Server to the Home router using the LAN IP

But I can NOT ping to any other host on the LAN!. I do not know if I need to enable routing or firewall rules on the Openwrt client to forward incoming traffic via the wireguard interface to other hosts on the LAN. This is preventing me to access my Home and office networks from my road warriors. any help/hint here would be much appreciated.

Port forward should give you more control, unless you want to allow everybody and everything.

In the diagram Home and Office seem to have the same address space, I suppose it is a typo.
What is the output of the following commands in the Openwrt at home?
cat /etc/config/network; cat /etc/config/firewall; ip -4 addr ; ip -4 ro ; ip -4 ru

Yes, it is a typo. already fixed.

Well thank you very much trendy.
Your commands helped me realize that I was missing a firewall rule:

This allows forwarding from the wireguard interface to other hosts. This simple rule did the trick and everything working as intended.

thanks for the help.