Dear community,
The basic issue that I have is that I'm only able to connect from my laptop on network A to my NAS for a short while (+- 1 hour) after power interrupting my wifi extender device (terminal command to reboot isn't sufficient). After some time I loose my ability to ping/ssh/web into the NAS.

Please find below a highlevel diagram from my network. 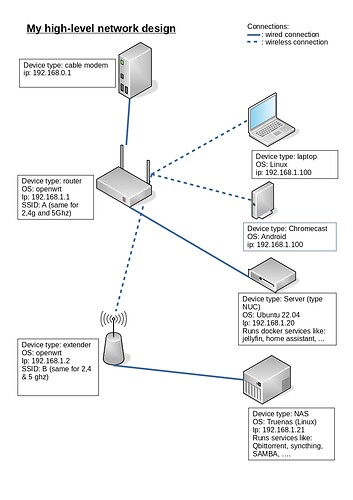 I have tried the following

Any idea's on what the problem is and what I could try/test next ?
Any suggestions for a temporary work around ?
Feel free to ask me outcomes from terminal commands.
Please consider me a beginner in networking

Thank you for your support.
Best regards

Please provide more information about the extender and router?
Make & model of device?
What version of OpenWrt?
Are you using relayd package on the extender, or implemented WDS?
Which radio (2.4 or 5 GHz) on extender is being used to connect to router?
If you connect another wired device to the extender, can it be pinged when you cannot ping the NAS from network A ?

Your issue may be a 'variation' of reported cases where devices wired to relayd router cannot be reached.
https://openwrt.org/docs/guide-user/network/wifi/relay_configuration#known_issues

Q2: I have implemented WDS. (was one of my requirements)

Q3: The radio used by the extender to the router is 5Ghz

Q4: If you connect another wired device to the extender, can it be pinged when you cannot ping the NAS from network A ?: I'll have to check.

No sure how arp broadcasting works (will try to learn) but my sentiment is that the ARP broadcast from my NAS (wired to the extender) is not being received by the clients of the router.

Does openwrt on WDS have a configuration setting to enable this behavior ?

regarding the variation: very well spotted, however my understanding of the issue is that it related to relayd, while I have WDS.

As you are running custom 21.02 snapshot, I can only suggest you try latest snapshot, or try 15.05.1 as used on your main router?

Perhaps test using 2.4 GHz, instead of 5 GHz to link to main router to see if issue exists?

Otherwise, another forum member with more WDS knowledge may be able to answer your questions.