I have started working on some features for the incredibly useful watchcat, and the corresponding luci-app-watchcat packages.

The code needs another quick tidy up, and the commits need to be redone in order to make this modular and more easily acceptable/revertable, which I will do. Here is my plan for that:
A commit for each of the following:

I wanted to see if I should change the priorities a bit based on community feedback before starting the MR.

what a kind, considerate and genuine soul...

Should I make it so any service can be restarted, instead of just ModemManager?

probably as a list though... i.e. ' list user_script 'A''... the only downside of this method is lack of luci management...

suppose an additional built in sample/daemon script could overcome that... something like ... 'option watchcat_script 1'...

in or out of the script/s above 'option hotplug_ifaceevents 1' or similar...

Joined the forum just to say - I am really looking forward to your improvements. Especially the following two:

Since my IPv4 and v6 paths have different quirks.

(Longer version, my modem assigns a bogus IPv4, but not v6, address if it doesn't have connectivity)

I like the idea to trigger hotplug events as it can give the user control to write their own actions. I’ll have to look into that more

I'm looking forward to it. When will it be released?

The MR's are under review on github, we need to make sure everything is right before it gets in. 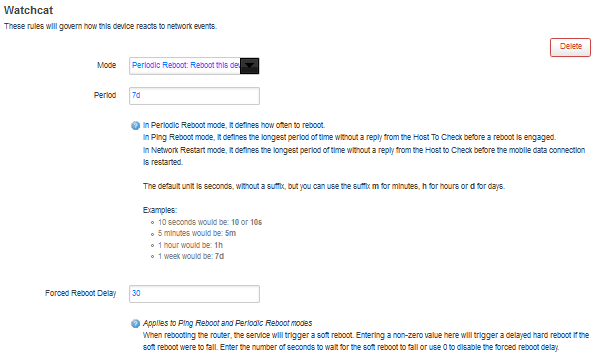 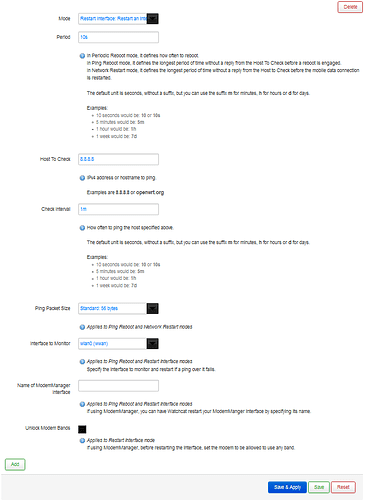 There have been some changes to luci-app-watchcat and watchcat; namely a rewrite in JavaScript, and moving Watchcat into its own /etc/config/watchcat file, respectively. Testing is welcome. At the moment there is a call for suggestions on how to support migration from the old system.@watchcat[n] UCI configuration to the new location via a UCI-defaults shell script. If anyone has any suggestions, feedback or code contributions feel free to jump into the conversation.

Edit: these have been merged into master

Sorry my English is bad

I have the same problem. What are your interface to monitor and to rebbot?

Try my super simple script, copy it inside /etc/ and add "/etc/respawnLTE.sh &" in rc.local:

Are you specifying an interface to ping over? Please post your config file.

@TonyB_IT
You should probably put it under /usr/bin/ instead of /etc/, which is meant for configuration files.

Yes I had that idea earlier, just haven't had time to implement it yet. You can already accomplish the same thing by modifying the source code of this package

i'm running openwrt 19.07.7. installed watchcat 1.7 and luci-app-watchcat. when i go into luci watchcat there is only the option to reboot. any ideas?

Does watchcat support IPv6? I would like to monitor my 6in4-wan6 interface, and reboot if ping -6 to a remote ipv6 destination fails over it.