Hey all, need to ask a question re. VPN on dumb access point, not sure if what I want to do is actually ok/possible…

The first router is connected to my ISP modem, and I have VPNs from ExpressVPN installed on it that work great.

I have just added yesterday a new Linksys WRT3200ACM as a fourth dumb access point, connected via Ethernet to the third router.

I have now installed OpenVPN and configured an OVPN from express vpn on the fourth router.

Is it even possible to do what I want to do with different vpn connections? And if so, what am I doing wrong? Hope this made sense/didn’t ramble…not sure how to explain it well

With a dumbAP you don't have any control over the traffic of the clients. Everything goes to the default gateway, which, in your case, is the 1st router. All traffic manipulations should be configured there.

Thanks for your help! Ok i added a policy to vpn policy routing, but it doesn’t seem to have made a difference…wondering if i configured it wrong? I’ve pasted below the config file for VPN PBR, the router i am trying to exclude is IP 192.168.1.93

we will need to see a network map/diagram and be given a detailed explanation of what subnetworks and ip ranges are given to clients... 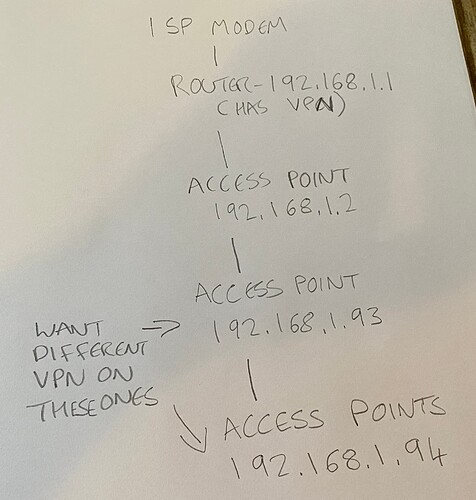 Forgive the awful pencil drawing but this is the map of what I have right now…and what I want to do:

You either have to use routed AP or use vlans to separate the traffic from each dumbAP back on the main router.