Dear Forum, I'm struggling with configuring my home network using Virtual LANs.
Router is a TP-Link Archer C7 AC1750, where only LAN Port 1 is in use. Devices are connected to a 8-port Netgear managed switch, whereas Port 1 is supposed to be used as trunk port.
My idea is to create the following networks:

Now, for instance, I want a PC to join VLAN 67 and get an address assigned from that network. Still it's assigned an address from the default LAN (.1.0), instead. What's wrong with my configuration?
I kindly ask for your understanding, since it's the first time I create such kind of networks from scratch by myself.

Thanks in advance for any precious answer.

I want a PC to join VLAN 67 and get an address assigned from that network.

The you need to plug it into a port somewhere that is untagged VLAN 67 with a PVID of 67, or set up the PC to have a sub-interface on VLAN 67 and attach it to a tagged port.

Do you have a DHCP server running on the interface? What about your firewall zones?

Untagged on one VLAN and PVID on a different one is a rather unusual choice.

Edit: As is more than one untagged VLAN on a given port.

I would recommend that you start simple and build from there. Specifically, reset to the default configuration so that you have just one LAN defined (untagged on all ports of your C7). Then, add another network, remove the default LAN from a single port on the C7 internal switch (let's say you take physical* port 2 for the second network), and assign that port to carry the second network as untagged (technically the same as PVID, but OpenWrt just shows tagged/untagged/off). Now, ports 1, 3, and 4 have the default LAN, and port 2 has the second network. This should give you two networks that can be accessed by simply moving the ethernet cable from one port to the other. This configuration will allow you test each network to make sure that they working properly, without the extra complication of VLAN tagging and PVID/VID assignments.

*keep in mind that the physical port mapping may be different than the logical assignments in the switch config.

Once the two networks on different ports has been proven to work as expected, you can start playing with tagging and trunking.

Now, regarding trunking and untagged/tagged networks: On a given wire, you may have:

A port/wire can have tagged networks only, if desired, including just a single tagged network (which does not constitute a trunk). A trunk is defined as a port/wire that carries multiple networks. A trunk carrying two networks may be:

Now, I said that you can only have a single untagged network on a wire, and I also mentioned that there is a important nuance with respect to 'untagged' and 'PVID'.

A smart/managed switch will often have PVID (Port VLAN ID) on the switch port setup, and designators for tagged and tagged networks in the VLAN setup. In the VLAN setup, you can usually assign multiple networks to a given port as untagged. The best way to think about this is that these networks are "available" to the physical port, but only one may be assigned as untagged at any given time -- this is why there is the PVID section in the switch port setup. The PVID selects the single network (from the available untagged networks of which the port is a member) that will be used untagged on that port.

Tagged networks at the port level, may also be called VIDs. In the smart switch's VLAN setup, you can assign tagged VLANs to the physical ports. Usually, any network that is assigned to a switch port as tagged will actually appear, tagged (as VIDs), on that physical port (this is unlike the untagged setup where ultimately only one network is selected via the PVID).

With this info, hopefully you should be ready to try trunking. So let's say you take port 3 of the C7 and make it untagged for the default LAN and tagged for the second network. Configure your smart switch the same way -- setting up the VLAN configuration that includes the first/default network VLAN ID as untagged and the second network as tagged. Then go to the port configuration and set the first network as the PVID. If you then select two other ports, one each, to have the first and second networks untagged and those networks set as PVID for the corresponding ports), you should be able to access each network by simply moving the ethernet cable between those two ports.

Once you have 2 VLANs working over a trunk, you can build out the rest of your network.

Adding some screen grabs from my TL-SG105E smart switch.

In the image below, the bottom table shows the VLAN IDs and the associated ports.
-All 5 ports are members of VLAN ID 1 as untagged.

This makes port 1 a trunk port, while all others are carrying just a single network. 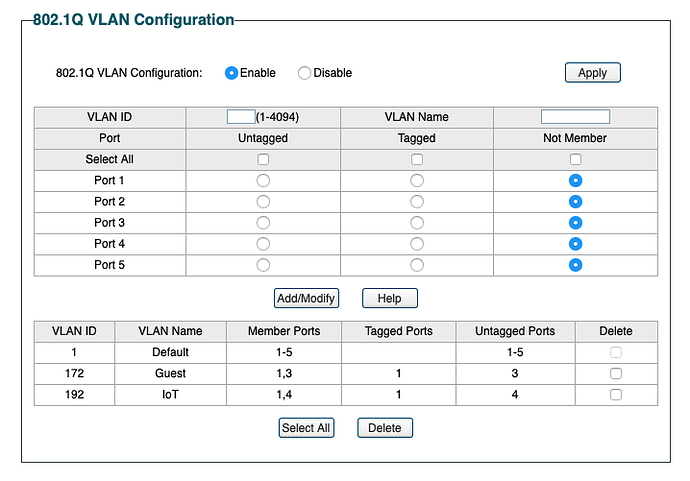 The router or upstream smart switch on the other end of the wire connected to port 1 of this switch is configured with the same VLAN setup -- untagged traffic is VLAN 1 and VLANs 172 and 192 are tagged. This makes all of the VLAN traffic flow, keeping everything consistent from the router, through the switches.

I think the switch in the C7 requires special consideration for VLAN numbers higher than 128. So in a network such as this where you get to choose the VLAN numbers, keep them small.

On your C7 you should have all the vlan's defined with switch_vlan blocks, with a CPU port and the external port tagged in all of them, and untagged in none of them.

The pvid setting exists to resolve when tagged and untagged traffic arrives on the same cable, it is best not to do that in the first place.

The pvid setting exists to resolve when tagged and untagged traffic arrives on the same cable, it is best not to do that in the first place.

@mk24 - why do you say that it is best not to do this? Is your recommendation to have all VLANs tagged if over a trunk (and to never have an untagged network on the trunk)? This is certainly a valid approach and can be good in some circumstances (it offers some level of security over the untagged situation), but I've never known trunking with both an untagged and 1 or more tagged network(s) to be a bad practice in a general sense.

I intentionally tag everything on my trunks, set the PVID to 4095 (blackhole) and, with switches that support it, drop untagged traffic, as well as traffic that comes in tagged with a “wrong” tag.

That way there’s never a surprise as to where traffic goes.

The “degenerate” use cases to use untagged traffic to change VLAN tags or the like should never arise in a SOHO situation.

Just to summarize and make thus some other people understand:

After correcting configuration it's all right.