Vlan tag for ftth, from wan to lan with tags

please give some advice.
i'm trying to do the following.
ftth ONT -> openwrt router -> ISP router for voip. 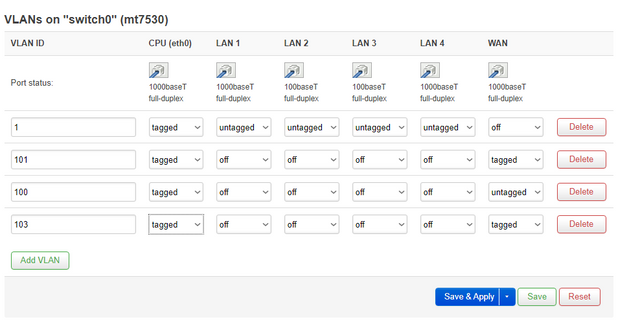 my openwrt router (hex) is doing the pppoe connection on vlan 100 (don't mind the "untagged" in the screenshot), and it should just transport vlan 101 and 103 from the wan port to a lan port where the ISP router will be connected (because of voip and isp management).

how do i do that? do i need to create multiple new interfaces where i will put them on 0.101 and 0.103 tags, or is that not needed? my router will not interact with those vlans, there's no usable data on them for it.
if it's not needed, do i need to simply tag a specific lan port with the same tags, and data traffic will "flow" from wan port to lan port with no modifications?

The physical device of the OpenWrt pppoe WAN will now be eth0.100. You don't have to send the other ISP VLANs to the CPU port at all, since the router itself will only be accessing the Internet, not VOIP. VLANs 101 and 103 will hardware switch between two ports.

So you need to take one of the other ports out of the LAN (VLAN 1 set to off) and set it up for the ISP router which is now used only for VOIP. It would include the VOIP VLANs (but not the WAN VLAN) tagged. Then the ISP router will work for VOIP as if it were connected directly to the ONT, but otherwise it isn't part of your Internet WAN or LAN.

so if i understood it well, it should look like this?