I have been converting my network from my one Netgear WNDR3700v4 to help study for my Cisco cert. But the setup on LEDE is really throwing me off and it could be the difference in terminology or something.

My problem is I found out my 2960 actually has a secret way to enable IP routing. So after doing this I want the 2960 to do the intervlan routing saving my router from having to do it. But how do I get the WNDR3700 to do the DHCP? I had a hard enough time getting it to work in my current situation.

I have the Cable Modem coming in the WAN port which is eth0.2 and the switch in eth0.1

Since I am not doing router on a stick I SHOULD NOT have to turn the switch connection to the router into a trunk and can leave it as access.

I have the dhcp setup to work correctly right now for the wired and wirelss but since I have not hooked the cisco AP into the mix right now that is skipping my switch and going straight through the wireless on the router so its a special setup, which the addition of the Cisco AP should simplify.

I have tried messing with the switch settings in under LuCI with only failure because this is my main connection I have to restore settings when I can't make it work and try again another day, so I am asking for your help!

UPLOADING AN EXAMPLE OF THE NETWORK I WANT AND MY CURRENT SETTINGS: 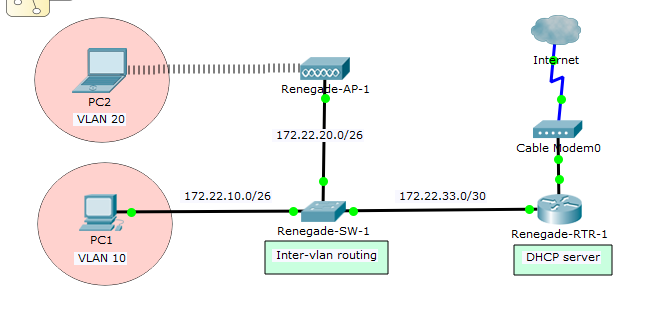 IMGUR LINK TO MY VLAN AND INTERFACE SETTINGS:
http://imgur.com/a/WTNtS

You should edit the topic title as you are not looking for 3700-specifc stuff but for VLAN and subnet routing advice.

In a better summary, I need DHCP to 2 separate pools in 2 VLANs as well as the static ip for management setup on one port going to a Cisco switch. I don't currently think this is possible in LEDE... it looks like I'll hVe to do it with a router on a stick design instead.

I am not a routing guru, so I am hesitant in giving you detailed advice.

But I think that you are mixing here quite different things, VLANs for keeping traffic in logical pipes in switch, "interfaces" used for high-level config in LEDE (e.g. for DHCP), and subnets used for TCP/IP addressing.

Just defining VLANs will not lead into anything.

I think that you need to declare separate "interfaces" in the network config in LEDE, then assign each VLAN to one interface. Then you can config DHCP pools for each interface.

Also the thread Segregated DHCP on multiple VLANs - stumped! might interest you