I've been using openwrt on my wdr3600 for years. Now I'm running 18.6.01 with a pretty straightforward configuration:

What happens is that since I upgraded my Nokia 6.1 (TA-1043) to Android Pie Netflix and Amazon apps stopped working when the phone is connected via WiFi. This problem is quite hard to diagnose because:

So the problem must be someway related to Android and Openwrt with these two particular apps. I tried:

As a last resort I installed an old Netflix app downloading an apk file from netflix's support center. This version does work but it's outdated and not secure. I don't cosider this a real fix, so...

I mostly agree but these app work when using some other WiFi so...

I don't know much about IPv6 since here in Italy its adoption is really modest and my ISP doesn't support. Openwrt has IPv6 out of the box and apparently it does no harm to any other app/device (they get ipv6 addresses but anything works via IPv4 as usual). I haven't disabled it since I trust Openwrt people to chose good defaults. Anyway I'll give it a try. How do I disable it? It's not well documented in the wiki and there are a ton of IPv6 related options scattered here and there so it's not clear how to do so.

Anyway I'll give it a try. How do I disable it?

In the LuCI web GUI on the LAN: 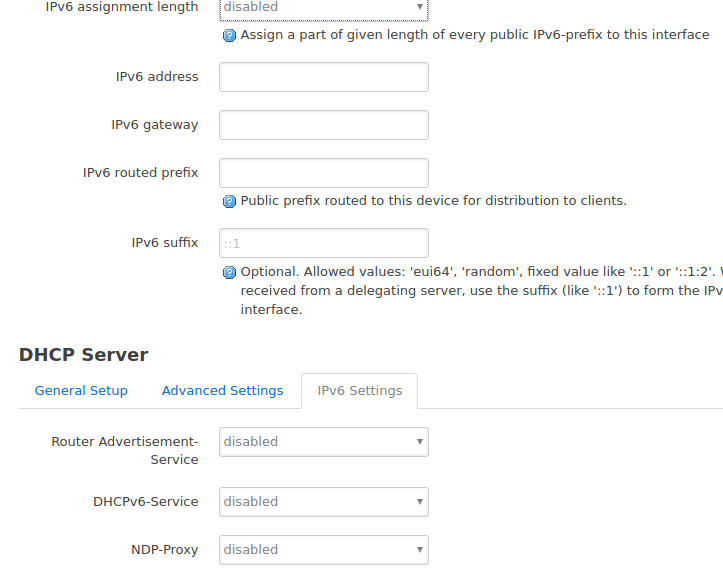 I tried configuring my router following your screenshot but It didn't work. There are other IPv6 settings though (e.g. ULA-prefix) so I'm not convinced I've fully disabled IPv6. Even so killing entirely IPv6 to fix some phone app seems like overkill. There must be some more reasonable workaroud! Or at least I hope so...

In the meanwhile is there something I can do to troubleshoot this weird issue?

I did found the solution: MSS clamping was missing a tick in the firewall tab.