After a long time thinking about asking here I decided to try anyways. But be warned: this question is about old, never-to-be-supported hardware (5x WRT54GL ver. 1.1 & eventually, maybe 2x WRT54GL3G).
If you don't want to help with that, that's cool however saying: "just bite the bullet and buy something newer" would not be considered helpful by me. I know that already. Seriously, read it 15 times.

Since I am also confused about lost wikis, forums LEDE / OpenWRT split, re-merge and new rules I hope this post won't offend anyone to an unreasonable degree... You have been warned though.

With that being said on to the issues & question at hands:
I want to reconfigure my home wireless network by using as many routers I have lying around in a productive way. Here is how it looks right now and what I would like to do, with SSID names slightly changed for privacy reasons:

The AP is working as intended AFAICS. Now to the hard part: I have several other WRT54GL – some of which I've already successfully set up with OpenWRT Backfire and would like to now use these to repeat the signal of goldsteal_WLAN_Wi-Fi_3. Sadly Backfire does not seem to include a bridge with the variant the WRT54GL ver. 1.1 still fully works under. Or to make it easier: I have exactly this problem: https://forum.archive.openwrt.org/viewtopic.php?id=66141.

Is there any way for me to still repeat goldsteal_WLAN_Wi-Fi_3 of the first OpenWRT router with the other 4 WRT54GLs?

@goldsteal, welcome to the community!

If you don't want to help with that, that's cool however saying: "just bite the bullet and buy something newer" would not be considered helpful by me. I know that already.

...but you know that the devices are officially unsupported...hummm...OK I won't...but for others: 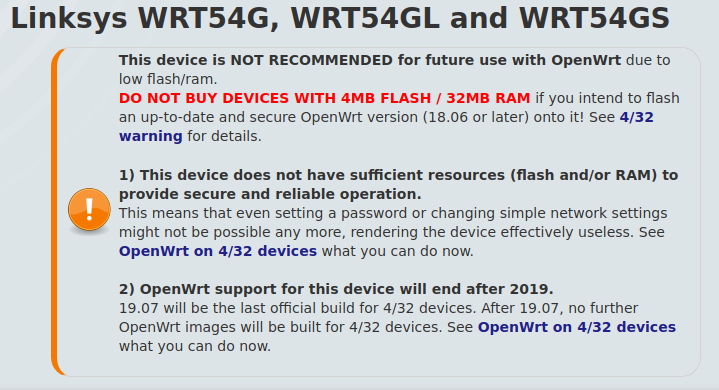 Sadly Backfire does not seem to include a bridge with the variant the WRT54GL ver. 1.1 still fully works under.

Correct. Somewheres in this forum (in multiple threads), I speak of exactly the WRT54GL and this series of router. The Broadcom chips do not bridge without the proprietary WiFi drivers - not available for OpenWrt.

Is there any way for me to still repeat goldsteal_WLAN_Wi-Fi_3 of the first OpenWRT router with the other 4 WRT54GLs?

Nope, you can't "repeat"...and also you will have horrible WiFi performance running "antique" 802.11b hardware on the same channel as g+n devices.

I'd use devices with Atheros chips personally...but you wish to use those devices...won't work.

[SOLVED] How do you upgrade Kamikaze? Installing and Using OpenWrt

LOL, I thought for a moment "maybe they thought I was trolling them!"

Well, long history short, this series device was a common one in the "Tech Bubble" days. I accumulated 4 over the years and used a WRT54G daily until ~2015 when I got FTTH (their throughput limit was ~30 Mbps LAN-to-WAN). These were my DD-WRT days - I stopped using OpenWrt for years as a beginner, over confusion as to why it could not do what DD-WRT called "Wireless Client Bridge." I now know about the Broadcom …

You missed that the OP wants to run the old firmware, not upgrade.

I have one of these routers (though not in use) and honestly, I would recommend running a Tomato build on what you have goldseal. Grab an older Shibby (or Toastman) Tomato build using the 2.4 kernel and it'll function nice and fast compared to the 2.6 and higher kernel. If you want the latest whatever it is, it'll have to be FreshTomato but it doesn't build for the 2.4 kernel. I wouldn't want to try running the current version of OpenWRT on one of these.

Even back in the days of Barrier Breaker, these were never optimal for running OpenWrt due to the lack of open Broadcom wifi drivers.

I have no experience with it, but there is "broadband-hamnet" firmware which purports to run a mesh.

@mk24, I'd advise someone to install pure OLSRd...the hammnet is old firmware too (see my post - OpenWrt Kamikaze), and the OLSR they used seems to be proprietary and incompatible with pure OLSR.

I would normally echo the “too old, unsupported, too slow/underresouced, and too insecure” advice, but you said you don’t want that.

My advice given the hardware and firmware versions would be to hardwire the additional units - is that a possibility?

Not really for all of them. I'll look into the other firmwares mentioned first.